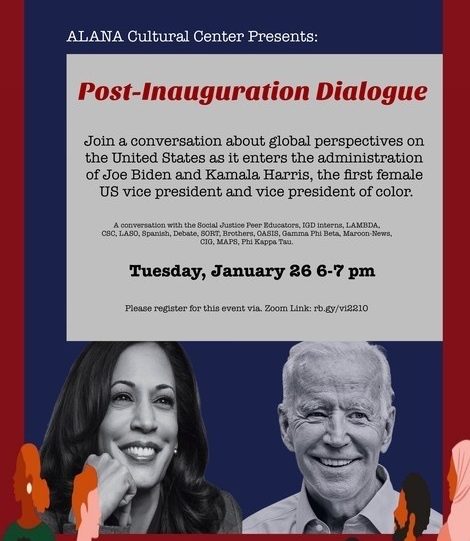 “The inauguration and at least talking about the new administration has become even more important as we witnessed all the events leading up to the inauguration,” Social Justice Peer Educator sophomore Maggie Aulman said. “Having a space and designated time for students to share their candid opinions was important for us and Colgate students.”

Moderators Aulman and senior Jaritza Núñez led the discussion by asking questions to more than 200 participants. Panelists from different clubs in the audience were also there to help facilitate the dialogue. The intention was to establish a space where people could speak about any hopes or concerns they had about the current Presidential administration, according to Núñez.

“We wanted to reach out to clubs on campus who we knew were actively involved in a lot of social justice oriented and political events,” Núñez, a lead senior Social Justice Peer Educator at ALANA, said. “A lot of the clubs listed were helping us with either participating as panelists, participating as audience members or helping to spread the word through advertisements on social media or through their emails.”

Núñez and Aulman asked questions about hope and resilience in the new administration, as well as how the Biden administration will directly affect Colgate’s campus. Students were able to chime in and speak, or submit their thoughts anonymously to Aulman or Núñez.

“We actually usually mention the option for anonymity and do that for a lot of the events in ALANA, because the topics we are discussing are usually very personal and about identity and can be very sensitive,” Aulman said. “We always want to leave that space for students to still be heard without specifically calling themselves out or making themselves known.”

Other discussion questions included “What are your thoughts on the work already done and executive orders?” and “What are some challenges and fears with this administration?”

“Listening to the dialogue, there was some more hope than I expected there to be,” Junior Grace Darko said. “A lot more people are optimistic than I thought they would be. I like the idea that Kamala Harris, a Black and Asian woman, would be able to become Vice President and how inspiring that is.”

Esther Rosbrook, director of ALANA, asked how the new Biden administration would impact how we lead our student groups.

“I feel like there is a slight breath of fresh air when it comes to leading campus groups,” Darko said. “I feel like I can find a way to focus on my identity without a guy that keeps shouting at people. And at the very least I can feel at peace knowing my identity isn’t deemed as a target.”

Students were able to share their thoughts about the post-election pro-Trump protests and attack on Capitol Hill, and speak about topics such as environmental progress and universal healthcare. The dialogue closed out with an open Q&A.

“Martin Luther King Jr. was focused on social justice, and he got a lot of hate from a lot of people, especially the government and administration,” Núñez said. “This continues his legacy by providing a space to critique the current administration and also talk about certain things that could be viewed as positives.”