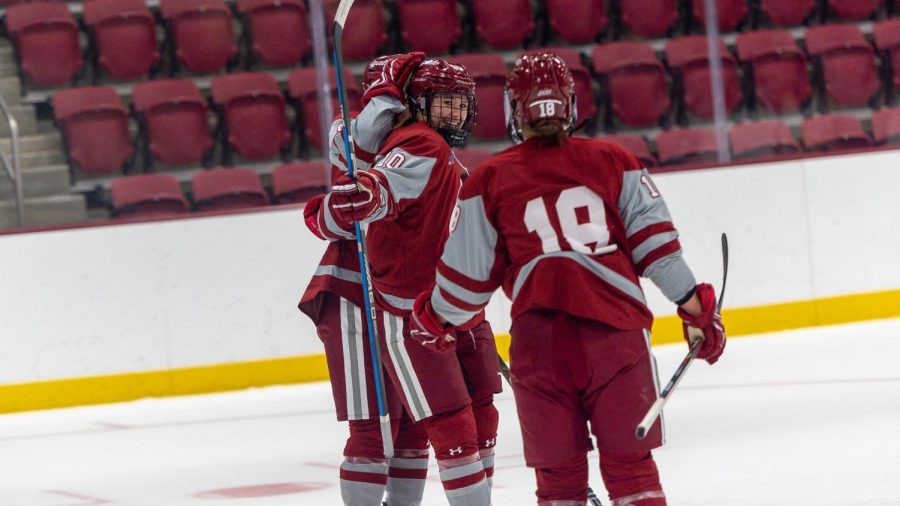 Colgate Women’s Ice Hockey is off to a strong start this season with a record of 10-2-1 overall. The group kicked off the season on Nov. 20 with an exhilarating 3-2 overtime win against Syracuse, followed by nine more wins for the Raiders. The team is currently ranked No. 5 nationally, according to the latest USCHO Division I Women’s Poll. The Raiders have an altered schedule this year due to the COVID-19 pandemic, which means they are subject to play the same teams multiple times. They have played Clarkson seven times this season and their record against them is 4-2-1. With pandemic-related challenges, the Raiders have had to get creative to keep themselves mentally and physically tough throughout this strange season, while still sticking to their team’s core values.

Head Coach Greg Fargo spoke of how the unpredictability of our world’s current state has challenged himself and his players to not take their season for granted. The Colgate Women’s Ice Hockey staff sent out workouts for their players to do every day during the summer. Their captains also took on increased responsibilities to keep stronger communication between their coaches and teammates.

“Times like this, it truly shows the strength of the individuals on this team,” Fargo said, “and [have] offered us an opportunity to think differently. This past year has been a really good example of where their character shines through.”

Redshirt senior defender and captain Caroline Ross said the team is being proactive.

“People took it as a time to get better in any way that we could. Everyone was working out in their garages and kind of doing their own bodyweight things to stay in shape,” Ross said.

The team has adjusted to practicing in small groups, rather than as a whole, and has also worked on playing with masks underneath their helmets. One of the biggest challenges the team has had to overcome this season is facing the same opponent multiple times.

“The focus is on us at this point, we want to play the best hockey we’ve been playing and also just keep getting better day in and day out,” senior forward and captain Coralie Larose said. “We keep saying we’re playing us every day, so we’re not playing Clarkson, we’re going to be having an us versus us mentality.”

Larose and Ross commented on how important it is for them and their teammates to stick to their team’s core values and focus on their larger goals for this season.

“We’re always going to have very high goals and we want to win championships in the league and nationally,” Fargo said. “When you stack good days on top of each other, you ultimately end up in a good spot. We want to be a puck possession team, a team that controls space and makes plays. We need to keep finding ways to fine tune and get better and that’s really been our mindset.”

The Raiders are working extremely hard for their goal of a national championship this year and Larose passionately stated her confidence in this year’s team.

“We want to win a national championship and I think we have the team to do so this year,” Larose said.