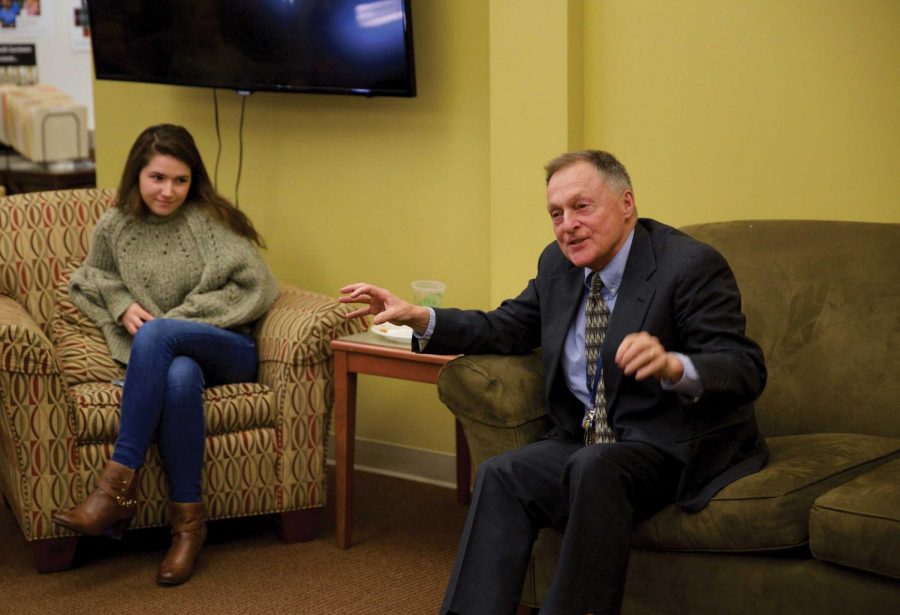 Dana Chapman shared personal  stories of successes and challenges as an educator in Madison County.

On Thursday, November 30 in the Max A. Shacknai Center for Outreach, Volunteerism and Education (COVE), Colgate welcomed Dana Chapman for a conversation concerning his extensive background in education in Madison County. Chapman has served as Superintendent at the New York State School for the Deaf, as the principal of Hamilton Central High School and as the principal of Stockbridge Valley Central School. Along with these positions, he has worked as an interim principal for more than 12 other schools around Madison County.

Chapman grew up in Hamilton and was a student at Hamilton Central High School when his father was the principal. After receiving his Master’s degree in Education, Chapman followed his father’s legacy to become the principal of Hamilton Central High School. Although he has worked at many other schools, one of the most challenging positions he held was Superintendent at the New York State School for the Deaf. Working with hearing impaired students poses unique difficulties. Chapman learned sign language, and felt that the students appreciated being able to speak with him without interference. When he started at the School for the Deaf, there was a student population of 250 students. When he retired, there were only 75 students enrolled. Chapman attributed this decline to medical advancements, and a recent move towards the integration of deaf students into primarily hearing high schools.

While a deaf school has its own difficulties, Chapman stressed that every school he has worked at has had its own challenges. Working in Hamilton and other Madison County districts poses distinct socioeconomic obstacles. Chapman described Hamilton’s community as being unique due to the presence of Colgate University. There is an emphasis on education in the Hamilton school district that is not seen in surrounding areas. Another difference between Hamilton and surrounding towns are the socioeconomic variatons. Clinton is a nearby town where Chapman has worked as an interim Principal. While Clinton also has a university in its community, there are much greater economic inequalities in Clinton compared to Hamilton. Another difference is that while Hamilton is a very rural and agricultural community, Clinton is not.

While each school district in Madison county has its distinctions, they all share one common attribute: size. Almost all of the schools that Chapman has worked at have been relatively tiny schools. Hamilton Central High School is so small that the elementary school and high school share the same building. He explained that a small school has definite benefits, but also experiences certain drawbacks. Chapman enjoyed working at small schools because of the relationships the staff are able to build with both the students and each other. Chapman explained that one of the challenges is that all the staff must hold many roles. The teachers serve as club leaders, organizers and coaches. As a principal of small schools, Chapman was able to spend time with very bright, gifted students, but a lot of his time was occupied by troubled students. Chapman found it most effective to discipline through patience. He strove to understand his students and help them redefine their choices in a productive manner.

Small schools foster unique social experiences. Two of Chapman’s former students who now work in the Colgate COVE were in attendance for his talk, and discussed how graduating with a class of only 55 people posed challenges. One former student said that at one point in her Hamilton Central High School career, she had six cousins, a grandma and an aunt either attending or working at the school together. Because the community is so small, families overlap in the school. The former student explained she felt that if a student attends a larger high school, they would be more equipped for college.

While each school faces its unique challenges, Chapman’s experiences in many different high schools around New York State have been invaluable to his teaching career.

Senior and co-leader of Hamilton Central Secondary Tutoring Emily Wong reflected on the importance of learning from established professionals in the community.

“Mr. Chapman provided a lot of wonderful anecdotes regarding the challenges and rewards of working in small schools in a rural community. I hope our tutors will be able to use his experiences to help better tailor their tutoring towards the needs of their students,” Wong said.