America as a Democracy: Siege on the Capitol 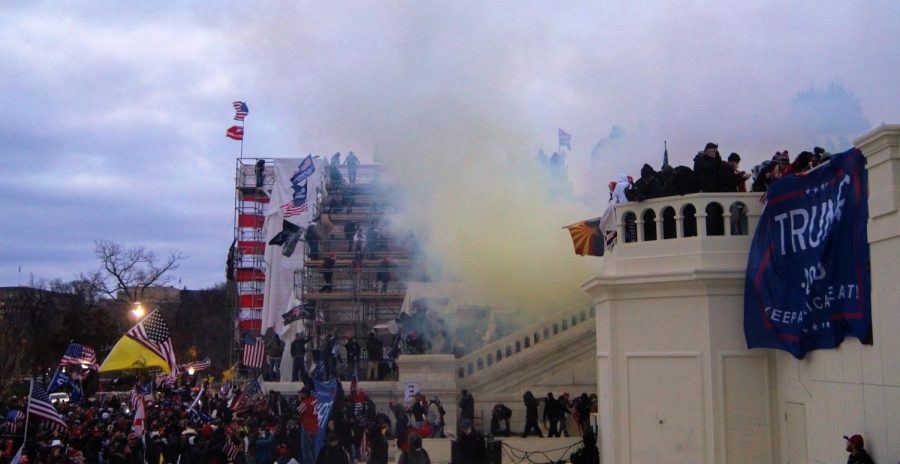 On Jan. 6, millions of Americans watched news coverage of the United States Capitol being sieged. Following a rally held by then-President Donal Trump, thousands of insurrectionists marched to the Capitol in protest, and many illegally entered the building, in a systematic and pre-planned attempt to try and stop the electoral count. The siege resulted in five deaths — a police officer beaten by the insurrectionists who succumbed to his injuries a day later, an Air Force veteran who participated in the insurrection and was shot by a Capitol Police officer while trying to enter the Speaker’s Lobby and three other people who died from medical emergencies. The insurrection at the Capitol was the culmination of months of prominent political figures like Trump, Texas Senator Ted Cruz and Missouri Senator Josh Hawley claiming a fraudulent and rigged 2020 presidential election. While these claims have been repeatedly debunked, some on social media channels continue to spread the misinformation, preying on public distrust of the general media.

“It’s hard to imagine that we would be at the place we are today without social media and without these specialized places where this type of misinformation is communicated… where QAnon thrives, places like 4chan and 8kun… these sources are something that I’m barely familiar with, the people who are, though, that’s where they get their media,” Assistant Professor of Political Science Matt Luttig, who specializes in American history and political psychology, said. “One of the things that we’ve seen happen — and this goes back to the ’70s and ’80s, with the rise of talk radio and Rush Limbaugh and Glenn Beck — is that these kinds of more ideological-types of news programs… opinion-oriented news journalists that don’t subscribe to kind of the ‘norms’ of journalism, one of the things that they’ve done is they’ve discredited traditional news organizations.”

Luttig went on to explain why the public have moved away from these traditional news avenues.

“In 1974, [journalist] Walter Cronkite was the most trusted person in America. There’s no one within the media today who has anything like the general credibility that the news media had back then. There’s a lot of reasons why trust in the media has declined, but one of the reasons is that these more opinion-oriented organizations have really successfully undermined [major media outlets] by criticizing the credibility of traditional organizations like the New York Times, CBS News, etc. For people who don’t trust those organizations, they have to find alternative sources they trust and social media has kind of opened up a whole venue of people who can act as opinion leaders. This is where Q comes into play and has generated, entirely through social media channels, a large number of followers,” Luttig said.

With numerous aspiring politicians attending Colgate, the student body has many ties to Capitol Hill and relationships with people there, which made the events of Jan. 6 all the more harrowing.

“My junior spring of high school I was selected to serve as a U.S. Senate page with 29 other juniors from across the country. We moved to D.C. for the semester, attending U.S. Page School in the basement of a Capitol building in the early morning and reporting for work on the Senate floor directly after,” junior Chloe Smith said.  “The Spring 2017 pages still have a groupchat we use almost daily. A page from my session was actually working on the floor when they were evacuated, so we were all messaging her making sure she, and everyone else, was okay. I was also messaging some older floor staffers and stenographers I got to know while I was working there to confirm their safety. What astounded me the most, however, was each of their feverous commitment and desire to go back into the Chamber and finalize the Electoral College votes in the direct face of violent insurrection. The Senate and House floor staff are some of the most dutiful Americans I have ever met.”

Following the insurrection, which was reported to be at least partially planned on the social media app Parler and other online forums, the Federal Bureau of Investigation (FBI) began arresting participants. The charges so far have ranged from unlawful entry and violent entry to conspiracy. At least 137 people have been arrested as of Jan. 31, with 400 suspects identified altogether through the help of social media and tips from the public. Despite the arrests, experts fear that the events of the Capitol will be seen differently depending on one’s political beliefs.

“People’s views about [Jan. 6th] are going to be very different depending on people’s partisan proclivities. Democrats are going to view it as a terrorist attack [and] some Republicans, not all Republicans but a lot of Republicans, are going to view it as a legitimate response to what they perceive as a stolen election,” Luttig said. “I think we have a very serious crisis of legitimacy, crisis of trust, that Trump and his minions really… kind of saw the fuel and lit a fire that is going to be very hard to extinguish.”

Politicians, athletes and celebrities alike have pointed out the double-standard in the policing of Black Lives Matter protests and the illegal infiltration of one of the largest symbols of American Democracy. During and following the events at the Capitol of Jan. 6, multiple photos emerged on social media that appeared to portray Capitol police officers helping and — at least one officer — taking a selfie with the infiltrators. Whereas the BLM protests that occurred following the death of George Floyd were met with large police presences, National Guard troops, tear gas and immediate mass arrests, despite the majority of protestors remaining peaceful, the hundreds of people who stormed the Capitol under false pretenses of a “stolen” election were met with a visibly small police force despite reported claims that the FBI provided warnings, albeit these purported warnings contradict earlier statements.

“No one can tell me that if it had been a group of Black Lives Matter protesting yesterday… they would have been treated very, very differently than a mob of thugs that stormed the Capitol,” then-President-elect Joe Biden said, according to AP News. “We all know that’s true. And it is unacceptable.”

The fear induced by the events at the Capitol has not been restricted to politicians and experts, though, as it has echoed and spread throughout D.C. and the country.

“I’m from Mclean, VA, like 15 minutes outside [Washington], D.C.  I was at home doing a virtual internship [when] my mom asked me to come down and turn the TV on for her, and I found out [what was happening in the Capitol] from the news,” senior Jared Lampal said. “I was shocked and a little worried given how close I live to the city.”

The insurrection at the U.S. Capitol and the response to it has made not just everyday people, but experts as well, disillusioned about the future and present of American democracy.

“I don’t think [American democracy] is stable [right now]. I think that we’re in a very precarious situation. The two parties are very polarized… not just on policy issues, there’s a real level of hatred for people of the other party, right now… we cannot take for granted these peaceful transitions of power — I mean, the willingness to overturn elections has been demonstrated. I think we need to, as a country, make a strong commitment to securing those dimensions of our democracy.”

However, securing the future democracy of America is easier said that done given the current political climate.

“Even though Biden is really pressing for unity, there continue to be Republican senators with a powerful voice like Rand Paul trying to still raise questions about the legitimacy of the election. Part of the reason he’s doing that, it seems to me, as well as Cruz and Hawley, is because they’re trying to position themselves for 2024. They know that there’s a huge part of the Republican base who sees the election as illegitimate and they’re trying to increase their standing among that critical group of Republican voters. I think that the tensions are very real, and that the stability of our democracy has to be considered fragile, right now,” Luttig said. “Once the legitimacy of election results is kind of called into question to the extent it has, it becomes even easier to call future [questions] into elections.”