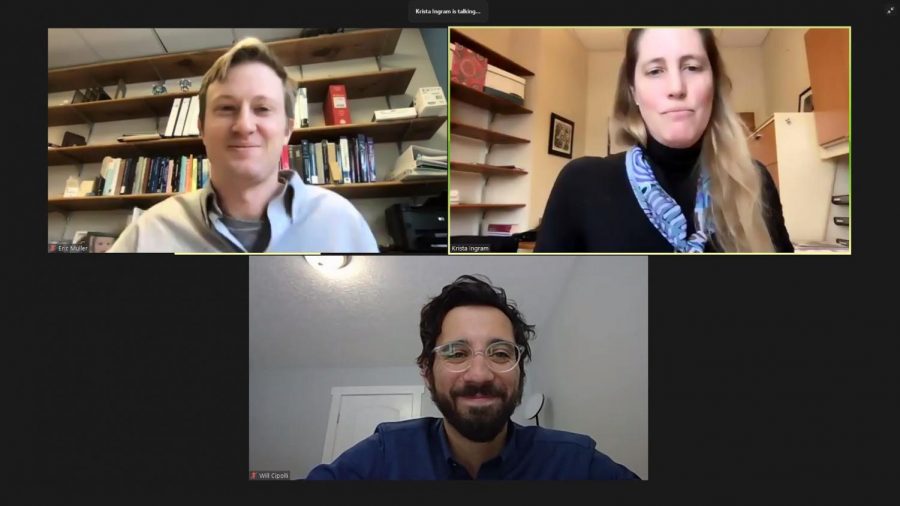 When you hear the word “scientist,” who do you see? On Feb. 5, 2021, the Division of Natural Sciences and Mathematics Department and the Center for Learning, Teaching and Research (CLTR) hosted a virtual Natural Science and Mathematics (NASC) Colloquium where they held a private screening of the documentary Picture A Scientist. Over 100 students watched the Tribeca Film Festival’s 2020 selection which highlighted the discrimination and harassment female scientists have endured for over a century.

There is no question that the Science, Technology, Engineering and Mathematics (STEM) field is dominated by men, with women making up less than one third of working scientists and women of color making up an even smaller percentage of that population. The popular term coined for this large gap is “the leaky pipeline.” As the film describes, there has been a large push for female involvement in the STEM field at the late high school level, which has been shown to be working as there has been an increase of women applying for STEM majors in universities across the country. However, the number of women that continue pursuing STEM decreases dramatically through their undergraduate years with a fraction graduating with a degree in the sciences and even less continuing to graduate school. Where are these leaks coming from and what causes them? President of Wellesley College, Paula Johnson M.PH, M.D., has a theory.

“Fifty-five percent of women faculty and staff experience sexual harassment, and those numbers have not really shifted overtime,” Johnson said. She continues to point out areas of academia that foster harassment. The current system in place is built upon dependence, where trainees depend on their mentors and students rely on faculty to secure their future. This creates a problematic dynamic that leads to an environment that facilitates harassment.

Jane Willenbring, Ph.D. was a victim of this dynamic. As a graduate student, she had the opportunity to study deglaciation in Antarctica under Dave Marchant, who was a well-renowned person in the field and even had a glacier named after him. Her dream opportunity quickly became a nightmare as her mentor began harassing her, from name-calling to pushing her down rocky hills and throwing stones at her as she used the facilities. This behavior continued for months. Because of his authority over her and her future career, she felt trapped, wanting to turn him in but pushing it off in fear of retaliation. This is just one example of the mistreatment she and many other women in science endure.

According to Kathryn Clancy, Ph.D., sexual forms of sexual harassment are the rarest forms of sexual harassment women endure from colleagues of other genders in academia. Behaviors like those that Willenbring endured, which are meant to be “put downs,”’ make up more than 90 percent of these cases. Throughout the film, a metaphor of an iceberg is used to illustrate the harassment women face, with subtle coercion being the tip of the iceberg, followed by exclusion from emails and meetings, denial of lab facilities and being mistaken for a “secretary.” The fact that women have to deal with this discrimination every day creates “leaks” in the pipeline, especially when institutions are unwilling to support them and correct for these behaviors. How can we change the culture to help stop these “leaks”?

The film shows how, step-by-step, change is attainable. Willenbring, after years of “putting off” reporting Marchant, filed a Title IX complaint with the University. However, Marchant was only suspended for a short period of time before allowed to resume his duties. In the early 2000s, women professors in the natural sciences went to the administration of the Massachusetts Institute of Technology (MIT) and had a formal meeting in which they discussed all of the discrimination they faced. The University then enacted policy changes to help protect the rights of female professors. But the question remains, will this be enough? Though slow at first, through repeated action, protest, and awareness of the inequality in the STEM field, there will hopefully be a time where science can be a place of discovery instead of a place of discouragement. So when you think of a scientist, who do you picture?