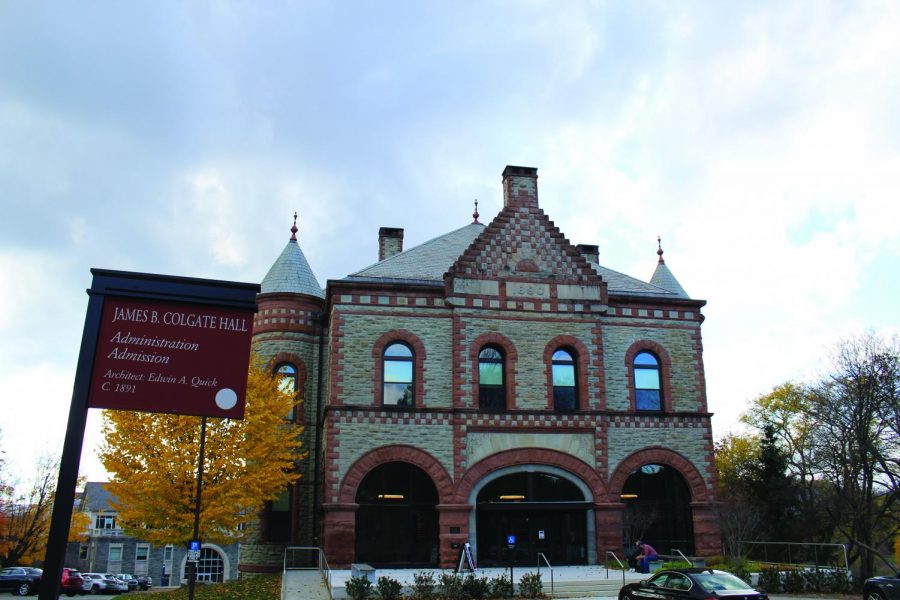 The University received a record 17,000 applications for the class of 2025, a 102 percent increase from last year and close to double the previous record set in 2019 for the class of 2023. Within the history-making applicant pool, applications from Black, Latinx and first-generation students more than doubled, according to University President Brian Casey. While these increases in applications and a more diverse pool are largely consistent with a national trend among selective institutions this year, which many attribute to widespread test-optional policies due to the COVID-19 pandemic, Colgate’s over 100 percent increase is far above that of its peer institutions.

“I don’t think anyone in Admission ever dreamed of seeing a year-over-year application increase of greater than 100 percent,” Jones and Wood Family Vice President for Admission and Financial Aid Gary Ross said.

Ross attributed the increase to a convergence of many factors including the test-optional policy, as well as efforts to increase outreach to potential students and media attention for Colgate’s reopening plan in the fall.

“Admission has undergone a number of changes in the past two years to increase the number of students we are reaching out to early in the college selection process, and we are more thoughtful about how we engage with them once they have expressed an interest in Colgate. Our move to a test-optional pilot, as a result of the pandemic, has clearly had an impact. It certainly has created greater access,” Ross said.

Casey said while the precise impact of Colgate’s three-year test-optional pilot on the applicant pool is difficult to determine, the increase in average Grade Point Average’s (GPA) among applicants leads him to believe the historic pool is academically stronger than in previous years.

“It’s hard to measure what [the test-optional policy] might do to the data because if you have high test scores, you would have submitted them; if you had low [scores], you didn’t,” Casey said. “The factor that cuts through that is the GPA is higher so that makes me think that the pool is more talented.”

Casey said while he attributes many factors to the massive influx of applications, much of it has been the result of a decisive effort in the Office of Admission over recent years to target students more strategically, particularly after hiring Dean of Admission Tara Bubble, who previously worked at Cornell University.

“We used to buy a lot of names from lots of companies and she said, no, what we need to do is build a funnel of students for whom this is the right form of education and we should throw the net radically wider… reach out to schools we’ve never talked to before,” Casey said. “It doesn’t sound like a big deal, but all the communication pieces, the viewbooks, the postcards, the emails — all were completely redone in the last two years, top to bottom.”

Julia Lombardo, a member of the class of 2025 accepted early decision (ED), stressed the role of the national attention Colgate has received in drawing students like herself, who were completing the college search process amid the pandemic.

“Colgate has also gotten a lot of national recognition for how they have handled the virus with the different services and processes they have implemented to maintain on campus classes, keep everyone safe and limit cases. The commitment and money the school has put into keeping the student body safe definitely appeals to potential applicants and their families,” Lombardo said.

Lombardo joined the class of 2025 as part of the 324 ED applicants admitted in December. Even with ED applications up over six percent from last year, the 61 percent early decision acceptance rate will likely be much higher than for regular decision applicants. Casey said the incoming class will not be bigger than in other years despite the rise in applications. However, Ross ensured that the application review process remains largely unchanged from previous years.

“At its core, the increase in applications will not change our admission review process,” Ross said. “Each application will receive a holistic review by our admission team, which we are in the process of doing right now.”

Notably, the early decision class saw a 32 percent increase in students of color accepted, and early evidence shows a similar trend in the ongoing regular decision round, according to the announcement on the University website which noted major growth in applications from international students, students of color and Southeastern domestic students.

“Attracting a diverse and talented class of students of increasing promise and achievement is a core principle of The Third-Century Plan,” Dean of Admission Tara Bubble said. “While the magnitude of Colgate’s application increase was unexpected, expanding Colgate’s reach was intentional.”

“[It’s] not just saying ‘Okay, we need to go out and recruit and build the numbers of students who are from diverse circumstances in our student body,’ but [it’s] also that we’re going to provide an established support system and resources in the foundation of our community to make sure those students can thrive. It’s not just one [thing], it’s really looking at the entire picture,” Abney said, noting, however, that “Those things don’t happen overnight, unfortunately.”

The class of 2025 was the first to apply under Colgate’s three-year pilot of test-optional admissions, a move many of Colgate’s peer institutions made amid the pandemic. As for the longevity of the pilot, Ross said it’s too early to say if it will be instituted permanently, pending a review of the pilot at the end of its three years. Bubble said that with the application review process underway, all indicators point to the strong academic merit of applications, even without testing requirements.

The class of 2025 is also the first to include Questbridge scholars, high-achieving low-income students matched with top universities from Questbridge’s partner schools and attend with full-ride scholarships. Casey attributed the large increase in applications from first-generation and Black, Indigenous and People of Color (BIPOC) students in part to the partnership, which brought 15 scholars who matched with Colgate through Questbridge’s college match into the class of 2025 last year. According to Ross, the partnership aids Colgate in “[reaching] an even larger number of students from underrepresented backgrounds.”

“[Questbridge] is a very elite group,” Casey said, who noted that over 1,100 Questbridge students applied to join Colgate’s class of 2025, more than three times their highest estimate. “A group of Stanford economists realized that incredibly talented Black and [first-generation] students weren’t even applying to elite schools because they didn’t think it was even available to them, so they said, ‘We’re gonna find them and we’re gonna tell them they can get into these schools; we’re gonna help them.’ But they only wanted to work with a small group of schools, so we were the most recent addition to this group.”

Along with Questbridge, Abney said the Office of Admission partnered in recent years with many national, regional and local community-based organizations that assist low income, first-generation and students of color in accessing college.

Along with other factors, Bubble attributed the rise in applications to Colgate’s no-loan initiative, which launched in fall 2020, that eliminates federal loans from the financial aid packages of any students with family incomes under $125,000.

“While Colgate has a long-standing tradition of supporting accepted students by providing full need-based aid, I think the adoption of the No-Loan Initiative… has put the University on the map for many [who] may have otherwise thought they could not afford a Colgate education,” Bubble said.

Across the country, many elite colleges and universities have seen dramatic application increases this year. According to CNBC, Middlebury College saw a 30 percent increase in applications, while Haverford College, Villanova University and a variety of other institutions, including the Ivy League, also saw notable spikes, but seemingly none as high as Colgate’s increase. Like Colgate, some peer institutions also saw a rise in applications from first-generation, low income and students of color, according to University Business. Additionally, the number of students accepted to the class of 2024 but who opted to defer enrollment to Fall 2021 increased by over 100 percent at Colgate, occupying 28 spots in the class of 2025, a trend seen at other institutions amid the uncertainty of in-person education.

While elite colleges and universities have seen a dramatic rise in applications, the general population of students applying to college is sharply declining. CNBC cited that overall applications fell two percent, a sharp decrease from application volumes in recent years.

As the Office of Admission reviews an applicant pool significantly larger than expected, the Ivy League announced that due to application spikes, their traditional late-March decision date will be pushed to April 6. Bubble said it’s likely Colgate may follow suit.

“It is too soon to say how the volume of applications will impact our decision date, but I do think it will be moved back a bit, perhaps by a week or so,” Bubble said.