ALANA’s MLK Programming Highlights the Vested Responsibility of His Dream 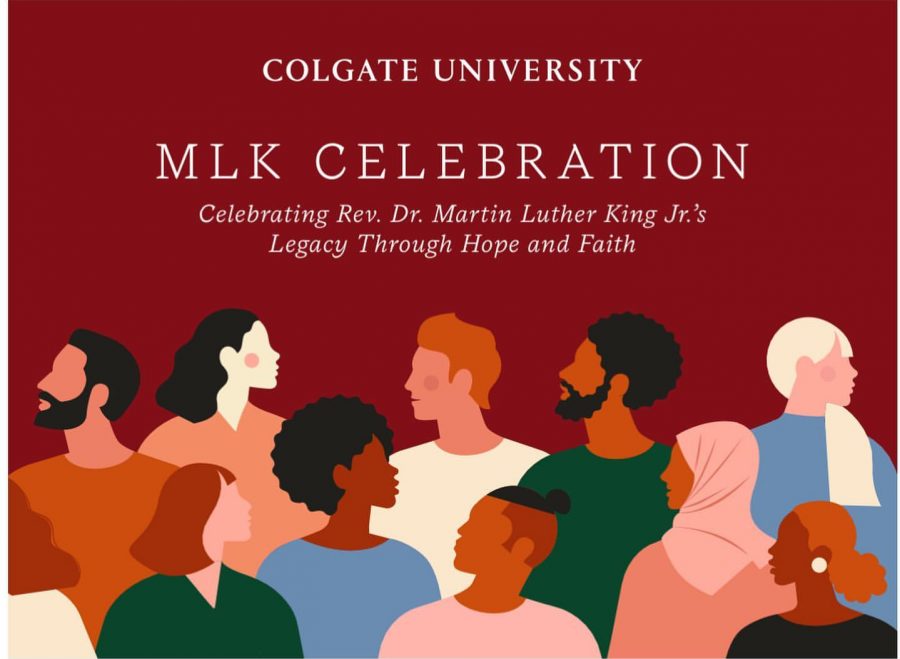 For the annual Martin Luther King Jr. speaker series, held virtually this year, ALANA amplified many voices to both define the obstacles imposed by structural racism, and offer paths to solutions, bringing speakers from across the country while also highlighting the experiences of the Colgate student body. One such event was, “A Journey Through the Lens of Race, Class, and Culture” which was moderated by junior Keilani Blas and first-year Elannah De La O, and featured a panel of seven current students. Each panelist introduced themselves by sharing their racial and ethnic identities, and the conversation moved from there to a discussion of how these identities were changed by coming to Colgate. Junior Sophia Beresford shared that on the bus from New York City to Colgate she saw a confederate flag flying for the first time in her life. It was not just the rural surroundings that evoked culture shock among the panelists. Junior Germain Tchuinkam, who is an immigrant from Cameroon, explained that where he lives in New York City there was a distinction between African Americans and African immigrants, but after coming to Colgate, it was so refreshing to see another Black person or person of color on campus that the importance of this distinction dissolved.

Both sophomore Juny Ardon and junior Flora Zhang described considering their relation to whiteness in a new way after coming to Colgate.

Zhang asked “Am I considered a person of color?” after moving to Colgate from San Francisco, and Ardon said, “I didn’t even know I was this not white!” when describing her transition from LA to Hamilton.

These identity transformations impacted the panelists’ lives in the classroom as well as in social situations, and it seemed like every panelist and many members of the audience had their own story of being in the classroom while other students debated the validity of their identities. However, despite these experiences, the panelists also agreed that they found strength in resisting the temptation to conform.

“Conforming is enticing,” Ardon explained, “But are you going to present your real self or the person you’ve created out of necessity?” All over the screen, panelists and audience members nodded enthusiastically.

One audience member, sophomore Mahi Gurram, unmuted her audio to express her gratitude for the Zoom call. “This [panel discussion] creates such a safe space. I am not alone. I was texting my friend who’s also here — she is not alone.”

The panel ended with a call for more safe spaces like this on campus, or as junior Jen Trujillo put it, “It’s not about having the same interests as much as carefully creating an inclusive infrastructure and a place for radical love.”

Other events offered audience members the tools with which to create these types of spaces. Specifically, Reverend William H. Lamar IV, who spoke at the invitation of the Heretics Club, and Dr. Angela Davis, who was ALANA’s keynote speaker, both focused on the how of social justice activism in their respective lectures.

Reverend Lamar theorized, “A new world is waiting to be born amid the rubble of this world. The rubble of fascism, authoritarianism, anarchy, white supremacy and kleptocratic capitalism. We are standing in a liminal space between what is and what can be, but the future is fragile and requires midwives. We must stay in the birthing suite, and stay in the rubble [in order to bring about change].”

Reverend Lamar is well acquainted with this rubble. As recently as December 2020, he was in the news in response to Proud Boys destroying the Black Lives Matter signs that hung from the Metropolitan African Methodist Episcopal church, where he serves as pastor. Dr. Davis, celebrated activist and catalyst for social revolution, has seen her a lifetime of the rubble described by Reverend Lamar, but she has continued undeterred to speak and educate.

During her conversation with students, Dr. Davis answered junior Nicole Weiss’ question about how she has kept her drive and determination despite a lack of results and backlash.

“As the beneficiaries of centuries of movement for radical change, we have to imagine our own long term impacts. Our temporalities are often confined to the lifetime of one person and that’s not how it works. Activists have to have a very active imagination … Ideologies of capitalism make it hard to imagine life beyond our own life, so we need to have conversations that urge people to think about what it means to live in a community,” said Dr. Davis.

Dr. Davis also encouraged the audience to stop thinking about activism as a separate activity. She said, “When we do this work we have to love doing it, so try to find something that really moves you. We don’t all have to be an activist in the same way … I have enjoyed doing this work, and looking back I see my struggles as a gift. The lesson is to try to find something that is going to be fulfilling to you as an individual.”

The professionals who hosted the Museum Conversation on “Lessons Learned from African American Community Members” described themselves as starting this process. The Longyear Museum of Anthropology curator, Rebecca Mendelsohn, introduced the first lesson: the relationship between activism and museums does not have to be adversarial. She then explored, along with the Picker Art Gallery curator Nick West and Blas who serves as the curatorial intern for the Longyear, ways in which museums can engage in activism and welcome activists. This idea that institutions should be responsible for the environment they are creating was echoed in many talks.

One event focused instead on how to navigate institutions that do not prioritize political correctness. The Paralympian and best-selling author, Bonnie St. John, presented her six-step program for “courageous humility” in situations of identity collision. She defined an identity collision as any situation in which one feels attacked or criticized for their identity, and urged the audience to take a moment to de-escalate in moments like these, and probe what their own role in this discourse might be. She also argued that political correctness does little to address the underlying causes of these identity collisions, and framed these moments as opportunities to foster a better understanding. When audience members pushed back on this idea, she clarified that these steps are only useful when one values the relationship more than they value being right.

Although MLK week events have finished, conversations like these will continue throughout the semester at ALANA and through ALANA clubs.

“I was really surprised by the consistent, large turnout of Colgate students at so many events. The support and turnout to is a small (but noted) change in behavior since before the ‘racial awakening’ last summer. I hope the Colgate community continues to support and attend events led by ALANA Cultural Center in support and in celebration of marginalized identities,” Blas said.