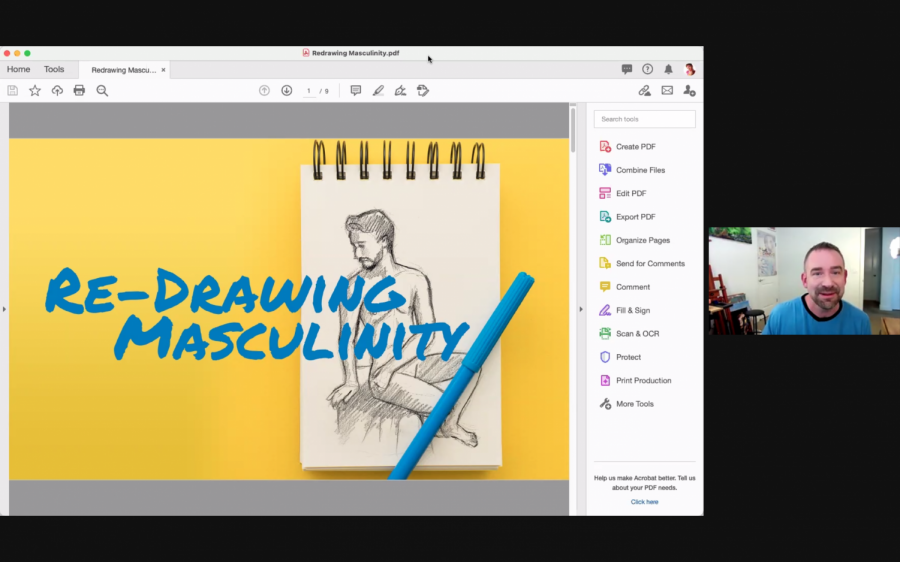 35 members of the Colgate community spent a rather unconventional Wednesday evening this week drawing male figures in various levels of nudity over Zoom. Redrawing Masculinity, a two-hour workshop sponsored by the Colgate Arts Council, commenced at 6 p.m. on Feb. 10 with an introduction from Associate Professor of LGBTQ Studies Danny Barreto. The three artists leading the workshop were Briden Schueren, Paul Richmond and James Allen. In addition to providing technical advice and conversation points, the artists in turn also served as the models for the participants to sketch.

The organizers and leaders of the event repeatedly emphasized the workshop’s inclusivity, survivor-centrism and presence as a safe space for compassionate discussion. A representative from Haven was on hand and made available for private messaging should the need arise.

The workshop began with brief introductions by each artist, followed by basic instructions for how to draw the human form, ensuring that even the most inexperienced of participants could follow along. The easy banter and abundant laughter between the three artists immediately revealed to the participants the deep level of friendship between the three men. The participants themselves were made up of students, faculty, alumni and members of the local and nationwide Colgate community.

Senior Jake Gomez reflected on the unique nature of the workshop.

“You would think that drawing three men posing nude, live on Zoom, would be awkward and uncomfortable. It wasn’t. The way that the workshop was paced and delivered created such a relaxing, safe and welcoming environment,” Gomez said. “As we proceeded through the different phases of sketching the three men posing, they would carry along a conversation about how societal expectations concerning masculinity have affected them in their lives…because what was centered was the conversation, the fact that the three of them were posing nude was not jarring or uncomfortable.”

“Everybody’s drawings are valid, it’s all good, even if you make us look ridiculous we still love you, and in my case, you’re probably accurate anyway,” joked Paul Richmond. A long-time resident of Monterey, Calif., Richmond is an internationally recognized visual artist and the Associate Art Director for Dreamspinner Press.

The discussion revolved primarily around the artists’ experiences as members of the LGBTQ community. The artists shared stories from their childhood about coming to terms with their sexuality, their experiences coming out and the various times they’ve encountered moments of conflict with their masculinity.

Richmond opened up the conversation to participants, inviting anyone to share their own experiences of conflict with their gender or sexuality.

“If you’ve been made to feel like you didn’t measure up to any particular societal standard that would be a perfectly good story to share,” Richmond said.

Many participants felt comfortable sharing their own experiences of friction with gender and sexuality, ranging from childhood memories to on-campus stories. The conversation even covered the notorious gendered floor division in Colgate’s own Trudy Fitness Center.

In the workshop’s final 30 minutes, participants were invited into three breakout rooms in order to continue discussions with the artists on a more personal and intimate level. By the end of the session, closer bonds had been formed between everyone on the Zoom call and any preliminary hesitations or discomfort about the subject matter had almost certainly been quenched.

Sophomore Lucy Bischof was especially appreciative of the workshop experience:

“I really loved how open Paul, Bridon and James were with sharing their experiences, and the discussion aspect of the workshop was super interesting. As someone with little art experience, I didn’t feel behind and it was a very welcoming space.”