Hamilton Center for the Arts Presents Local Artist’s “Living in Limbo: Portraits from the Border” 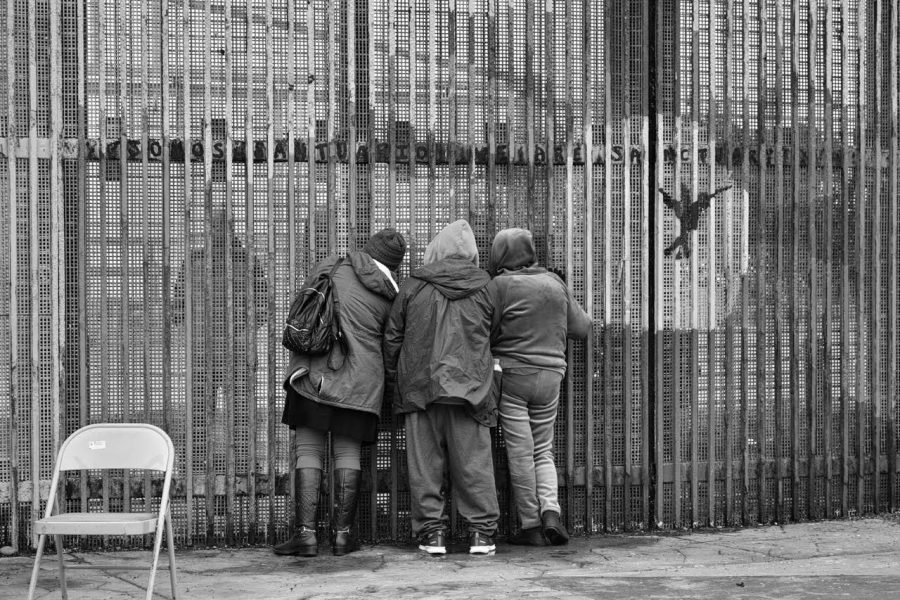 At the Hamilton Center for the Arts, local nature artist Bill McLaughlin’s “Living in Limbo: Portraits from the Border” exhibition provides an achingly poignant glimpse into the plight of migrants stranded at the border due to the Trump administration’s “Remain in Mexico” policy, which demands that asylum seekers at the U.S.-Mexico border be returned to Mexico to wait for the duration of their immigration proceedings. The profits from the exhibit, which director Kathy Herold states has been extended to February 20, will go directly to the non-profit migrant aid group Border Angels. In December 2019, McLaughlin traveled to Tijuana, Mexico, where he spent several weeks working with Hugo Castro of Border Angels to visit shelters, meet migrants, listen to their stories and ask permission to include them in his collection of retratos con dignidad — portraits with dignity.

As portraits, these photographs are intended to reflect the strength and power of the migrants, rather than simply photographing human suffering for documentation purposes. The portraits are arranged such that as you make your way through the winding corridor to the back of the gallery, the faces look out at you from all sides, creating a crowd of migrants around you as if to place you in Tijuana with them. All of the photographs are black and white, underpinning the collection with sophistication and significance. A myriad of faces looked upon the viewers from the walls — solemn-faced young couples, smiling, hopeful children, a mustached young man with his chin lifted in pride and a bundled-up trio huddled in anguish by the gates closed to them. Looking at these migrants, one experiences the depth and spectrum of what it means to be human.

“I hope that they will come away recognizing themselves in these photographs. It’s really that simple. They have risked their lives and sacrificed everything to make this journey. If we can see ourselves — our hopes, our dreams, our fears — in them, then this project will have been a success,” McLaughlin said of his goal for viewers’ connection to his work.

A significant source of inspiration for the exhibition was the severity of this border crisis and how migrants are portrayed in the media. McLaughlin, a longtime activist for environmental and human rights issues, applied his artistic abilities to his activist passions to create this exhibition. His work intentionally presents the migrant experience in a raw, dignified and empathetic manner to connect us to the people victimized by the “Return to Mexico” policy. He simultaneously strives to strip away and criticize politics. The portraits allow us to view the migrants in a more intimate way than an average photograph, and that sense of closeness forces us to consider the political decisions that led to the migrants’ current position in Tijuana. Migrants were too often “otherized” and painted as a threat by the Trump administration’s rhetoric. McLaughlin says that during his time in Tijuana, he experienced kindness from the migrants that is starkly at odds with the harsh, narrow-minded depiction of them in the media. They shared meals with him, made sure he had a blanket in his tent, invited him to chat over a cup of coffee and shared their personal stories. McLaughlin encountered many migrants who traversed over a thousand miles of treacherous terrain to flee brutal gang violence, suffocating poverty and rampant political corruption. These migrants have risked everything for the small chance of survival and success in the United States and are resigned to prolonging the danger of their journey — yet they still have the capacity to be hopeful and kind.

“This is a humanitarian crisis created not by hurricanes or earthquakes, but by the callous stroke of a pen. And now, made exponentially worse, by a deadly pandemic,” McLaughlin declared.

Because of the perils they fled in their home countries, especially gang violence in crime-ridden cities like Tijuana, there are many more migrants who did not consent to being photographed. However, those who did want to be photographed were eager. The children, noted McLaughlin, were so excited for their portraits that they dressed up as best they could and struck dramatic poses. Their bright faces and boundless, youthful energy was at odds with the desperate, exhausted conditions surrounding them.

It was the image of a child that finally pushed McLaughlin to go to Tijuana. He saw the harrowing photograph of 32-month-old Angie Valeria and her father Oscar Alberto Martínez Ramírez, both of them drowned and lying face down in the Rio Grande after trying to enter the United States. They, like the migrants photographed for “Living in Limbo,” took the risk of that journey because they believed so strongly that the lives they left behind were more dangerous than the uncertain future in front of them. They believed that their families could and should have more than the lives they were born into, and seeking asylum here presented a chance to fulfill that truly American dream.