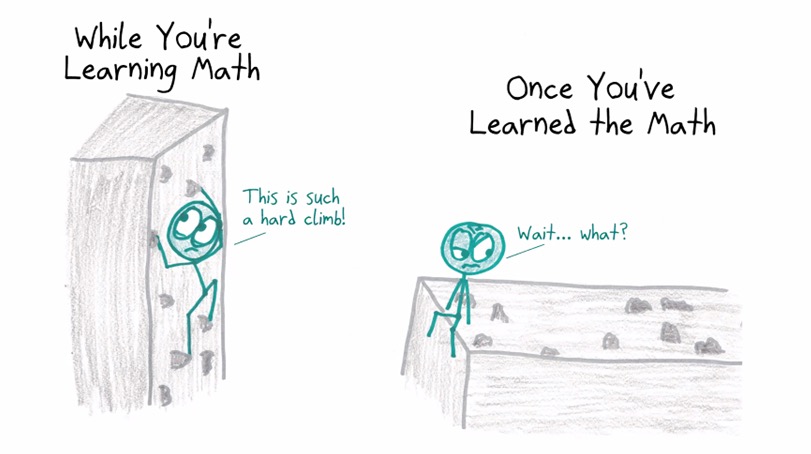 Colgate’s Math Club and Math Department eagerly welcomed author, teacher and avid math enthusiast Ben Orlin this past Tuesday, Feb. 9, who emphasized the importance of creating an inviting environment within which students can learn mathematics. He also discussed demystifying the subject’s reputation as dark magic and the resident storm cloud in the curriculum.

Orlin began his lecture by explaining how adults and children alike tend to shun math after they encounter a topic that is difficult to understand right away because it makes them feel brainless. He went on to argue that intelligence is only one of the thousands of factors that goes into excelling in math: the time you devote to it, your background and other contextual factors also contribute.

Throughout the lecture, Orlin encouraged attendees to open the virtual chat to share stories of times they felt particularly vulnerable learning something new and challenging. Both math majors and professors divulged stories of prior and current math battles that made them feel inadequate.

“Some of my professors chimed in and talked about how they’d had moments or taken classes where math made them feel stupid or unconfident in themselves. It seems obvious in a way — of course, everyone has had a hard time somewhere along the way, but I thought it was really nice to share that with each other. It was reassuring to hear that others had similar experiences — having some hard times with math and still carrying an enthusiasm and love for it,” junior Emma Hart said.

Holding onto that enthusiasm and love, math popularizers like Ben Orlin and well-known Youtuber 3Blue1Brown show millions how helpful math can be and how innately beautiful it is. Through passive media such as books and videos as well as active work like puzzle-solving, these math mavens work to engender joy and intrigue and expunge shame and fear in students of any age.

Splitting his time as a writer and a teacher, Orlin discussed how he modulates between different techniques to effectively inspire learners depending on the setting. Speaking about his writing, (he notably published his text Math With Bad Drawings in 2018), Orlin highlighted his painstaking efforts to correctly punctuate his sentences and cartoon dialogues so as to create the optimal experience for readers. As a teacher, he fluidly refashions his plans to respond to that particular set of students’ struggles and adapt to their needs.

“If I had to talk to a young student struggling with math, I would tell them that A) math gets way more fun as you go along and feels way more meaningful, and B) that it’s a difficult subject and taking a second to understand something is totally okay. I would also recommend that they consider what they like about math. For me, it was the word problems and games, but I had to seek that stuff out on my own,” Vice President of the Math Club Isabelle Sapountzis said.

Orlin also found that students are often not responsive to textbook problems because they do not reflect math in real life. Now, as one solution, the big projects that he assigns are based on problems that are present in the real world, which allows for students to get creative and inspired about the messiness of math’s art and science.

“I think our math majors are well aware of this — math is a lively subject and can be approached and appreciated in many different ways. It does involve a lot of active learning and by that, I mean struggling with problems and discovering the ultimate truths. This is true for both pure and applied math. Some of the best moments come after the truth dawns upon you. What Ben described in his talk would not surprise our math majors too much, but it can be a refreshing perspective for other people. Judging from his books I think he has succeeded in conveying that passion to the masses,” Assistant Professor of Mathematics Joe Po-Chou Chen says.

Orlin continues to uplift people through his talks and teachings by asserting that students’ struggles are not contingent on their intelligence and, with patience and effort, answers will come. He explains that there is no defined milestone in one’s math career where complexity falls away and clarity shines through unwaveringly because the beauty of mathematics lies in problem-solving. It is important to simply enjoy the process and celebrate the little victories.

“I think my favorite thing about Ben Orlin’s book was when I understood the joke. I would never imagine in my freshman year of high school laughing at a math joke because I thought I was really bad at math. Understanding these jokes gave me a bit of satisfaction because I felt like my years in math finally paid off.  When a high schooler asks ‘what’s the point of pre-calculus,’ I can tell them ‘to understand some of Ben Orlin’s jokes’,” first-year Alina Vu said.