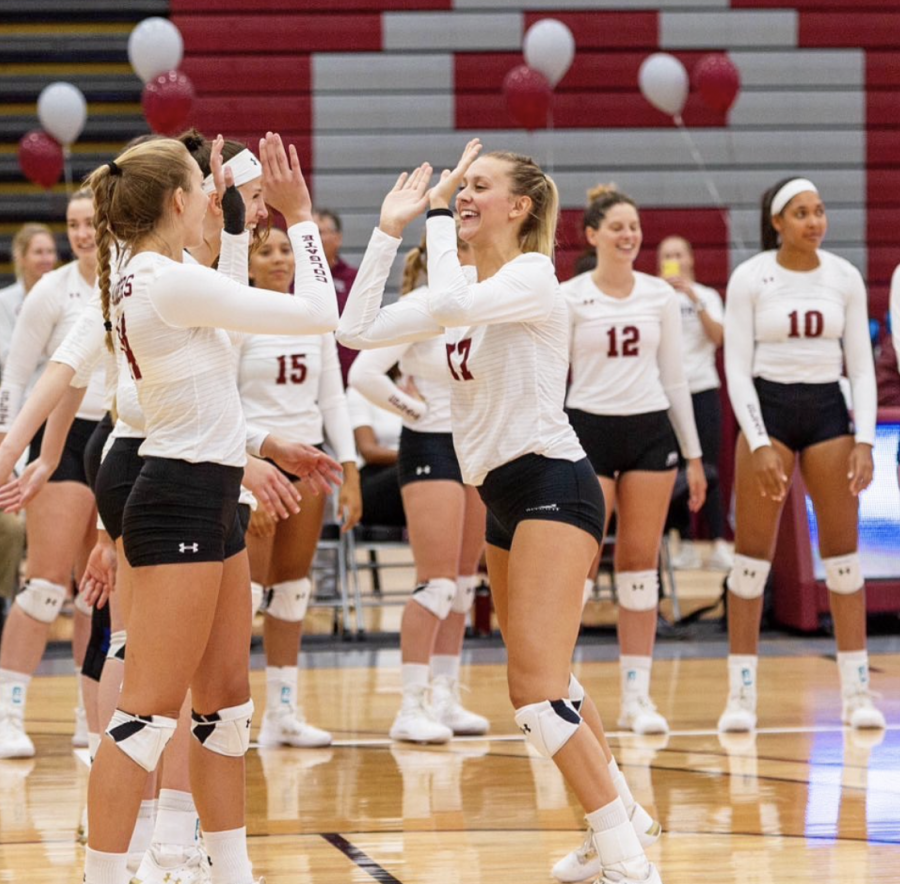 The Colgate Women’s Volleyball team will begin its schedule on Feb. 19 with a match against Army. The team was ranked as the second-best in the Patriot League preseason poll, behind only American University. Led by Head Coach Ryan Baker, the Raiders are poised to make a serious run in the Patriot League tournament and perhaps even walk away with a championship banner.

The Raiders have a healthy mix of young talent and decorated veterans. The team’s returning players include senior outside hitter Alli Lowe, who was both Patriot League Player of the Year in 2020 as well as Preseason Player of the Year for this season. But the team is far from senior-heavy. When asked about the current construction of the team, Coach Baker noted how he continues to be impressed by not only his starting seniors, but the improvement of sophomores and juniors from last season as well. Additionally, the team’s contributions from their freshman have greatly exceeded his expectations. Coach Baker went on to mention that he was really encouraged by the way that the team has come together, and that he is shocked by how quickly his newer players have adjusted to the team’s culture and being a student-athlete in general.

But clearly, this season will be very different from any of the previous Coach Baker has led. As with any program or event, athletic or otherwise, this season will be greatly impacted by the Covid-19 pandemic. The Patriot League has placed each team in a division with other opponents that are closer geographically, as overnight trips have been banned. As a result, Colgate will only be permitted to play Army, Lehigh, Holy Cross, Lafayette, Bucknell and they may not be able to test their skills against some other top Patriot League schools. For instance, American and Navy were ranked first and fourth respectively in the preseason poll, and the Raiders would only be able to play them in the Patriot League tournament.

Coach Baker noted how these kinds of scheduling alterations could be a kind of double-edged sword for the Raiders.

“Not seeing [other top teams] in the regular season could be good or bad. The good side is it may help us in seeding for the Patriot League tournament, but you also lose the opportunity to play some high-level teams during the season,”  he said.

The new scheduling guidelines are also especially awkward for the Colgate team because it is the most remote University that plays Patriot League Volleyball. Coach Baker even joked that, as a result of the new rules, teams may be more tired playing Colgate when they travel to Hamilton but everything evens out as his team might be more tired when traveling to away games.

All of these factors make the season trickier, but it certainly does not make Coach Baker any less excited about his team, nor does it make him less thrilled to even have the opportunity to play at all. Many other institutions were forced to cancel their seasons altogether, but the Patriot League is moving forward with their season, giving the Raiders a chance to play and hopefully win. For that, Coach Baker and his team are extremely lucky and grateful.

“For any collegiate student to have some sense of normalcy during a pandemic is incredibly challenging,” Baker said. “I’m so proud of Colgate and the Colgate students and the whole Colgate community.”

With that opportunity to practice and play, Colgate hopes to compete for a championship this year and Baker clearly believes that his team is more than capable of accomplishing their goal.

“I think we have a program that can certainly battle for a championship. The question is do we have a program that can handle the ebbs and flows of a pandemic, the ebbs and flows of the uncontrollable. I think that [any] team that can manage all of the uncontrollables this season has a fighting chance. I think this program and this group of women can certainly be one of the best this year,” Baker said.