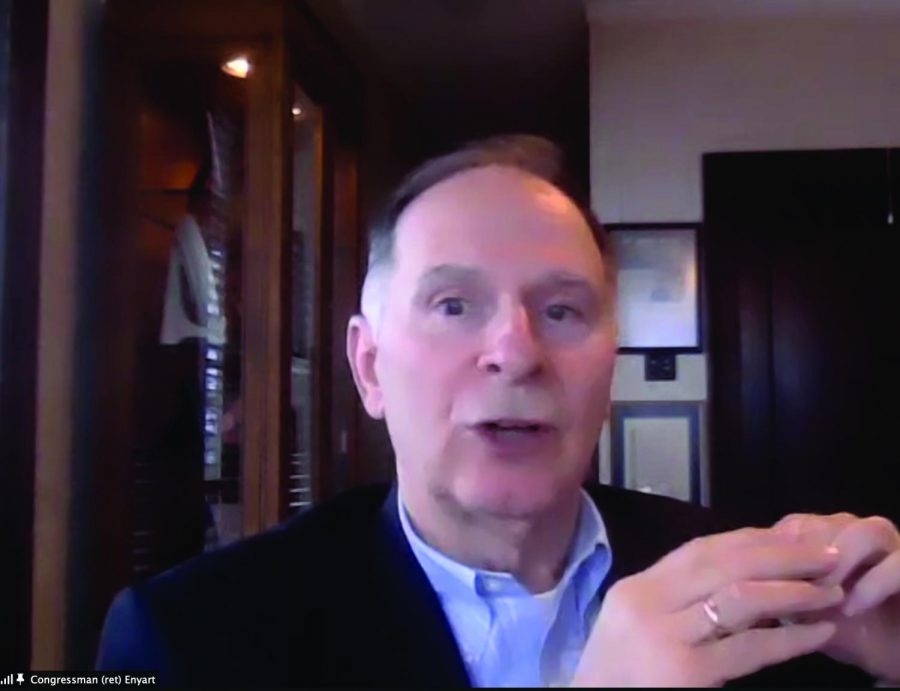 Two former congressmen joined members of the Colgate Vote Project during a Congress to Campus Community Forum on Feb. 8 to discuss their experience campaigning and navigating partisanship in the U.S. House of Representatives.

The bipartisan discussion featured former Republican representative from Vermont Dr. Peter Smith and former Democratic representative from Illinois Major General (ret) William L. Enyart. The event was hosted over Zoom by the Colgate Vote Project, with the help of the Stennis Center for Public Service and The United States Association of Former Members of Congress.

Co-Leaders of the Colgate Vote Project and juniors Eliza Lloyd and Samuel Adgie moderated the discussion, which was originally scheduled to take place over the course of three days during the Spring 2020 semester, but had to be rescheduled due to COVID-19.

“This event makes government a lot more personal, and I think that will really help students become more involved in the voting process. In relation to the election, this event is important to help navigate the issue of partisanship, which has become so obvious in our political process to the point where it’s nearly impossible to ignore it,” Lloyd said.

Colgate Vote Project member and first-year Brenna McConnell explained that the event is important to inform students about Congress’ responsibilities.

“There is generally an over-emphasis on the presidential election, but Congress is honestly just as important, if not more, in terms of passing policy that directly affects us as U.S. citizens and residents. After the results of this past election, serving as a sort of reset back to normal for the U.S., resolving political partisanship within Congress should be our focus and a concern of the average American,” McConnell said.

The former congressmen both discussed the significance of the event in terms of its bipartisan nature. Smith stated the event symbolizes the “inclusive[ness] of perspectives.” Enyart expanded on this idea, stating “it also contains the message that we can disagree over policy without being disagreeable.”

Responses to the forum were overwhelmingly positive from both students and staff. COVE Director and Staff Advisor Jeremy Wattles  stated that the discussion was “lively and in-depth.”

“[I enjoyed] hearing how [the representatives] rose the ranks,” first-year Nate Biller said.

Dean of the College Paul McLoughlin said he thought that the representatives were not the most memorable part, but rather the student organizers and student’s questions.

“It was the care with which both the student organizers and our guests demonstrated sincere respect for one another that stuck with me,” McLoughlin said.

The positive feedback for the forum was met with a desire for more bipartisan events with politicians at Colgate. McLoughlin highlighted the importance of these events on academic campuses specifically.

“We have to support bipartisan conversations if we are to appreciate and learn from multiple viewpoints. It is our civic responsibility to listen, to learn (rather than influence or change) and to connect with others across differences as part of a healthy academic community,” McLoughlin said.