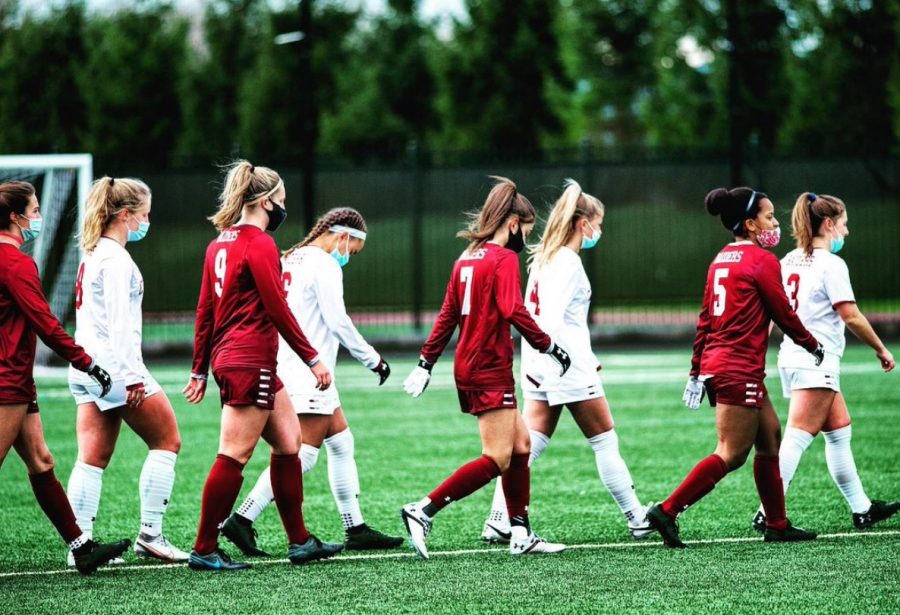 After the devastating cancellation of their regularly scheduled Fall season, the Colgate Women’s Soccer team starts their 2021 season on Friday, Feb. 26 when they will travel to West Point, NY to play their Patriot League rival Army. Their Spring schedule will only have games against other Patriot League schools Holy Cross, Boston University (BU), Lafayette, Navy and Bucknell.

The Women’s Soccer team, like many other teams this year, faced many emotional and physical hurdles due to COVID-19 interfering with the regularity of a normal season. Junior midfielder Emily Amano, a key player for the Raiders, elaborated on how her team handled the news of their fall 2020 season getting canceled.

“The cancellation of the 2020 season was very difficult to process,” Amano said. “With the state that the country was in, we all knew in the back of our minds that the season would likely be canceled… for some of us, it meant maybe never playing soccer competitively again.”

Even though Amano and her teammates were crushed by their season getting canceled, they found ways to stay connected and stay optimistic that a spring season would still happen. Players who were remote during the Fall 2020 semester, like Sophomore forward Jennifer Bartlett, still found themselves feeling very much a part of the team even if they were hundreds of miles apart from each other.

“There were a lot of Zoom calls that occurred, which helped a lot in keeping everyone connected,” Bartlett said. “I personally was remote all of the Fall semester and I was still able to feel connected to the team… the coaches and my teammates still made me feel like I had a place on the team, which was a great feeling.”

The players who were on campus in the Fall were lucky enough to be able to train, even if that meant they had to follow strict protocols.

“We spent this time working to find our identity as a group together on the field both technically and tactically,” Amano said. “Without outside competition, we created a competitive atmosphere at each practice and pushed each other to get better each day.”

With regard to the upcoming and abbreviated season, Bartlett said that her team is “controlling the controllables.” The Raiders have prioritized an optimistic outlook on the season and are grateful for every practice and game they have.

“We are extremely lucky to have the opportunity to play together,” Amano said. “We recognize how quickly things can change, and have adopted a mindset through which we are going to compete no matter what the situation is. Our team motto this year is ‘adapt and achieve.’ This means adapting to schedule changes, weather changes, occupancy in the locker room, increased testing for COVID-19 and more.”

In anticipation of the Raiders’ first game against the Black Knights, emotions and adrenaline are high. The players have been waiting patiently for months to see if all their training and hard work will pay off.

“We plan to go into it with a positive gung ho mindset and take them on and bring home the win,” Bartlett said.

Amano commented on the fact that the first-years have yet to play their first collegiate game, and that she is looking forward to seeing how they can contribute to their team’s success. Furthermore, she explained how her team’s motivation this season is to go all the way and win the league championship.

“We are very excited to see what the freshmen can bring for us come game day,” Amano said. “We are grateful for the opportunity to play this spring and we will do what it takes to hopefully win the Patriot League Championship and achieve our ultimate goal.”