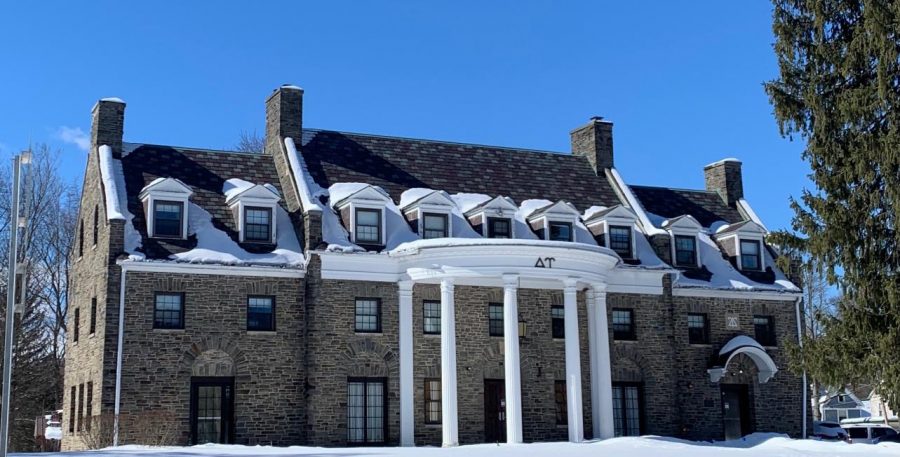 A student-run movement calling for the abolition of Greek life on campus has sparked conversation about the historical inequity of fraternities and sororities at Colgate. The movement, run primarily through Instagram, is part of the nationwide Abolish Greek Life (AGL) movement that emerged last summer amid protests against racial injustice, which now includes chapters at over 50 colleges and universities. It has gained significant traction at campuses including Northwestern, Vanderbilt and Richmond, all of which have seen large waves of students disaffiliate from their organizations following the establishment of AGL.

Co-founder of Colgate’s AGL movement sophomore Dora Mendelson explained that the movement is deeply rooted in American college culture that dates back to the Civil Rights Movement in the 1960s, with student movements aimed at dismantling Greek life for its racist and exclusionary practices.

Mendelson started Colgate’s AGL movement along with a small group of students in September 2020 after completing a form on the national AGL movement’s website during Colgate’s fraternity and sorority recruitment weeks.

“[We] were the only people within our social circles that weren’t rushing. We were watching people really struggle through the process of rush. People were deeply anxious. It was really hard to see from an outside perspective … and to witness such an intense social pressure to join Greek life,” Mendelson said. “It doesn’t need to be this way, and [the system] is really marginalizing for students who don’t want to be a part of it, as well as students who can’t be a part of it.”

“Racism, classism, heteronormativity, rape culture and other harmful systems are all characteristic of the broader Colgate and even American culture,” Langan said. “Greek life further perpetuates, supports and makes space for these oppressive and violent elements. Of course, abolishing Greek life will not end oppressive culture at Colgate, but it will make a major difference and free up space for students to connect across boundaries.”

While Mendelson doesn’t see the abolition of Greek life on campus as a reality in her time at Colgate, she said she hopes the movement serves as a vehicle for inclusivity and social growth on campus and creates community on campus for unaffiliated students.

“We know that the abolition of Greek life will realistically be a long process,” Mendelson said. “Alumni of [Greek life] at Colgate have kind of a monopoly on the school, board and administration… Where we want to start is building community outside of Greek life and create social spaces for students that don’t exist within fraternity and sorority houses.”

Dean of the College Paul McLoughlin echoed Mendelson’s sentiments that discussions of inequity in Greek life are not new, but he’s not certain they will make more pervasive impacts than past movements have.

“While I do see new conversations taking place about structural inequities and an awareness of implicit and explicit bias, I do not know if these new conversations will have a longer-term impact on memberships than earlier conversations. As long as there are students interested in joining a recognized organization, I think they will exist,” McLoughlin said.

McLoughlin said campus patterns show that removing organizations doesn’t remove students’ desire to join them, and thus, he believes that creating more equitable recruitment practices, more diverse memberships and other efforts to transparently reform would be more productive than the abolition of Greek life altogether.

“If one looks at organizations that are underground, elsewhere or at Colgate, this illustrates that official recognition is not necessary for some students to continue to affiliate. Rather than expending energy in the binary of here or not here, fraternities and sororities at Colgate and elsewhere would be well served by reviewing the policies and practices that can create animosity or feelings of exclusion,” McLoughlin said.

Director of Colgate’s Office of Fraternity and Sorority Advising Amber Decker echoed similar sentiments about the roots of Greek life but said she believes in its potential for change through the networks, friendship and community it affords students who participate, similar to other student organizations.

McLoughlin said that while organizations have expanded efforts for diversity, equity and inclusion (DEI) in recent years, including efforts that led to the creation of Sexual Violence Prevention and Support (SAPAS) chairs to address widespread sexual violence in Greek life, he believes far more needs to be done.

“Sustained, transformative and sincere efforts are more effective than campaigns that do not outlive the current leadership,” McLoughlin said. “During my first year, I saw significant progress in peer-to-peer education and prevention efforts, within fraternities and sororities, to end sexual violence…however, for these efforts to be effective at eliminating sexual violence, those early efforts must have sustained commitment by all members.”

Working on such reforms as the DEI chair for Phi Delta Theta, junior Sam Brotmann said that despite his participation in Greek life, he sympathizes with the aims of the AGL movement.

“Greek life was founded as an exclusionary institution that was meant for elite, white men. If the movement is successful and the school is able to replace Greek life with a good social alternative I would support it in theory,” Brotmann said.

Brotmann spoke about the movement’s goal of providing more social outlets to students who want them, commenting that he himself has felt limited by Colgate’s restrictive social scene when he was a younger student.

“If there had been other social alternatives, I might not have joined Greek life,” Brotmann said. “There are probably a lot of people who are involved in Greek life at Colgate and feel the same way, who would’ve been open to an alternative but did not find one that presented itself.”

Mendelson said that while organizations may be working internally on reform efforts, direct communication and collaboration with campus GLOs is not a priority of the movement.

“We’re a group that wants to de-center Greek life, so it makes more sense for us to take a grassroots model and communicate to people who are marginalized by Greek life or not interested in that system,” Mendelson said.

For many, Greek life poses a large financial barrier, which sophomore Sarah Traenkle, who disaffiliated from Gamma Phi Beta this semester, felt misled by.

“It feels like a giant pyramid scheme,” Traenkle said. “Greek life is really freaking expensive. We just give them money; I don’t know what it goes to. They don’t offer any scholarships for pledges and we can’t help anyone financially to be in the sorority. It’s completely cut off for anyone who can’t afford to be in it.”

Traenkle, who was a member of her sorority’s DEI committee, said reform efforts lacked support from the system, a similar sentiment expressed by senior Ali Altman, who disaffiliated from Gamma Phi Beta prior to the Fall 2020 semester. Altman said the inability to reform Greek life’s systemic problems led her to the decision.

“The Black Lives Matter movement over the summer really stirred this sort of feeling that my personal gain and the privilege of being in the system doesn’t outweigh the harm that it has caused,” Altman said. “I was really believing that I could reform the system from the inside. But I was continuously hitting all these administrative barriers and understanding that the system is designed to maintain itself and protect these exclusionary, racist practices. It really can’t be reformed. I didn’t want to be a complicit part of that system anymore.”

Altman argued that Greek life acts as a microcosm of broader issues of inequity at Colgate.

“Regardless of what systems are in place, we see the replication of things like white supremacy and racism and homophobia, and all of these discriminatory systems of oppression are just going to be reproduced in different ways unless we as a community actively commit to unlearning those,” Altman said.