Fantasy Football Studs and Duds: Injuries Give Rise to Unexpected Fantasy Leaders at QB and RB 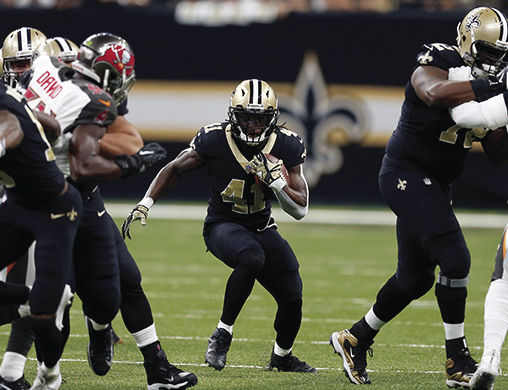 The New Orleans Saints, currently on a seven-game win streak, have received valuable support from Alvin Kamara. The rookie running back is leading the league in yards per carry and is developing as a top target for Drew Brees.

As the midway point of the 2017 NFL season passes, it is time to evaluate which players have thrived thus far and which ones have not.

New Orleans Saints rookie tailback Alvin Kamara has emerged as an unlikely fantasy standout through the first half of the NFL season.  Averaging a league-leading 6.0 yards per rushing attempt, Kamara definitely knows how to make the most of his opportunities as Mark Ingram’s backup.

Kamara is second in targets (48), catches (37) and touchdowns (5) in the Saints high-octane offense, and it is only a matter of time until Ingram’s annual injury occurs, opening the door for Kamara to be the offensive centerpiece for New Orleans.  Kamara has been a top-ten back so far this season, and fantasy owners should be able to confidently deploy him in lineups as the Saints make their playoff push down the stretch.

Alex Smith has been the savior that Kansas City has needed this season.  After losing key players like Eric Berry and Spencer Ware to injuries early on, the Chiefs’ 2017 Super Bowl hopes were in doubt.

Smith, rather than crumbling under the pressure, stepped up in a big way for his team and for fantasy owners, leading the NFL with an insane 113.9 passer rating and an 18-1 touchdown-to-intersection ratio. It is no secret that the Chiefs are stacked with plenty of weapons on offense, from rookie phenom Kareem Hunt to experienced pass-catchers like Tyreek Hill and Travis Kelce, giving Smith tons of great options to throw to after Kansas City comes out of its Week 9 bye.

Smith has been consistent thus far and, barring any major injuries, should continue to perform steadily for owners as the season continues.

Coming off a breakout season with Cleveland a year ago, Pryor was signed by the Washington Redskins with Pro Bowl expectations. Pryor has the tools to be an excellent receiver; he is tall, strong and has breakaway speed. Unfortunately, those hopes are virtually nonexistent at this point.

He has simply not been able to get anything going this season.  After a team-leading 11 targets in his first game, Pryor has not eclipsed more than five targets or 100 yards in any game since, and has only one touchdown over that span.

Head coach Jay Gruden has already suggested that Jamison Crowder and Josh Doctson have passed Pryor on the wide receiver depth chart, so Pryor’s fantasy stock is in a seemingly irreversible downward spiral.

Bryant was cleared to return over the summer after being suspended for all of last season, and he was expected to produce immediately in Pittsburgh’s high-powered offense. Those expectations, however, proved to be too high as Martavis has not scored since week 2 and has not surpassed five catches in any games this season.

Add in a diminishing share of targets due to JuJu Smith-Schuster’s emergence, a social media tirade and several trade requests, and you have the quintessential dud fantasy receiver who warrants little-to-no roster consideration unless big changes happen within the Steelers’ passing game plan.