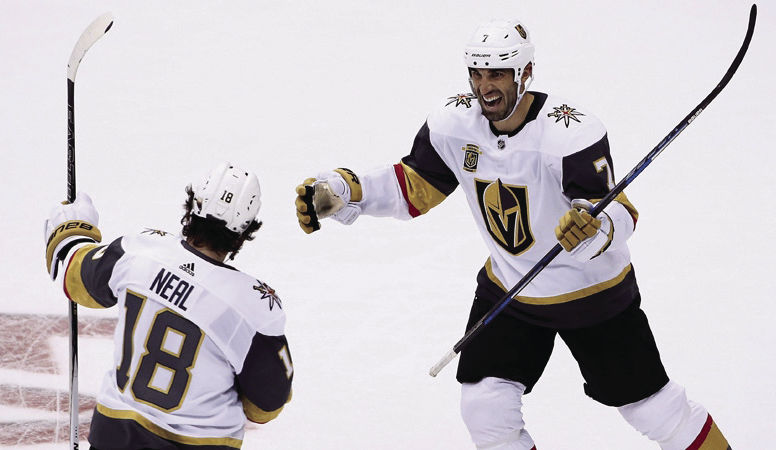 The Vegas Golden Knights have taken advantage of home ice to start the season, winning six of seven games. Now, the Knights will be tested on the road during their six game east coast trip.

James Neal became a Vegas Golden Knight legend only one game into the franchise’s existence. Having scored both goals in a thrilling 2-1 win over the Dallas Stars, Neal gave the people of Las Vegas a reason to smile just five days after the shooting that killed 58 and injured over 500.

Maybe the Knights have been motivated all season to prove they belong in the NHL, and maybe they rallied around a city in need of emotional relief; but either way, they have won a historic amount of games in the team’s first season ever. It has been a storybook start for the Knights, taking two points in eight of their first 10 games.

Neal, David Perron and Reilly Smith have been the scoring leaders so far on a team that ranks fourth in goals per game (3.7). The goaltending has also been superb, considering the Knights have used four goalies through their first 10 games and have allowed the NHL’s fourth least goals per game (2.5).

Knights goaltender Marc-Andre Fleury went down after winning three of four games, but goaltender Malcolm Subban (brother of Nashville Predators star P.K. Subban) stepped in and recorded the first two wins of his NHL career. After Subban went down, rookie Oscar Dansk stepped in and has posted a 1.35 Goals Against Average through the first three games of his career, all of which have resulted in wins. Unfortunately, Dansk went down in the second period against the New York Islanders on Monday, and Maxime Lagace came in relief to make his NHL debut. Islanders’ superstar John Tavares continued his scoring spree and exposed Lagace’s inexperience, putting two behind him and leading the Islanders against Vegas in their 6-3 win. With the exception of Lagace, each goaltender has done his job, and this may create difficulties in the coach’s office once Fleury and Subban return to full health.

The Knights have taken advantage of the schedule they were assigned, winning six of the seven home games to start the season following two away wins that preceded the homestretch. Vegas kicked off a six-game road trip on the east coast in New York on October 30, suffering the franchise’s first ever road-loss to the Islanders in Brooklyn. They will end the trip in Montreal’s Bell Centre before returning home to face the Winnipeg Jets.

Vegas Coach Gerard Gallant, formerly with the Florida Panthers, has done an incredible job with the talent on the roster. Though the Knights do not have a standout all-star like many other teams around the league do, the team has embraced the mantra that any skater can make the difference on any given (k)night. Gallant is known to value work ethic over pure talent, and this message has been received by the entire team. These players are pushing night in and night out for each other and the numbers have shown it. Goals have come from 16 different players, and while the Knights rank last in shots per game, they own a league-high 13.1 percent shooting percentage.

Chasing history, the Knights have already claimed their spot in some record books. However, it is only the beginning of November, and playoff spots are not secured in the first 10 games of a season. While the Knights have enjoyed early success, sustaining it will be difficult. I won’t write the Knights off and say their record is only an indication of beginners (and puck) luck, but this upcoming road trip will be a good measuring stick for the young, blossoming franchise.