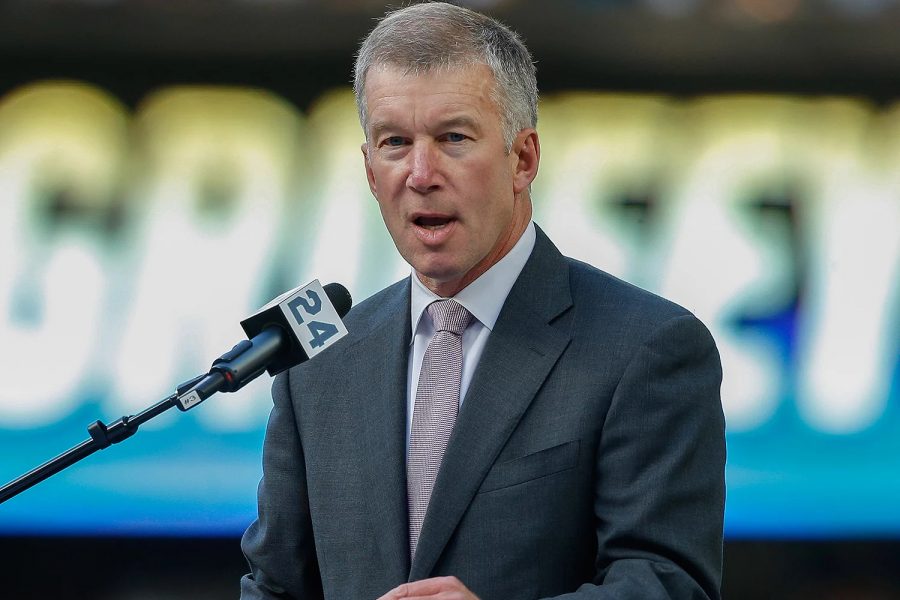 In the MLB, service time, one of the rules of baseball never discussed but always manipulated, starts when a player gets called up from the minor leagues to the majors. Once the player is promoted, a clock starts where that player is under contract for six years. The first three years are considered a standard contract, which pays the player a set salary. The remaining three years are contracted through arbitration negotiations between the team and the player. It’s a strategy used by every organization but teams repeatedly take advantage of this process. Clubs wait until the player gets older — around 24 or 25 — to maintain control of a player’s rights during their prime. While this is standard practice for most MLB teams, if discussed, it can result in a grievance from the MLB Players Association (MLBPA). However, when Seattle Mariners CEO Kevin Mather met over Zoom with Seattle’s Bellevue Breakfast Rotary Club on Feb. 5, he spilled the beans about service time and other negotiating tactics. When the conversation was posted on YouTube and discovered by the rest of the world, Mather was forced to resign by the Mariners.

Mather was excessively forthcoming at this breakfast conversation, sharing many of the Mariners’ strategies and secrets. He told the residents that no matter what, the young prospects in the Mariners organization were not going to appear at T-Mobile Park during the shortened 2020 MLB season, even stating that he’d play left field himself before putting his prospects out there. The first prospect he mentioned was Logan Gilbert, a great young pitcher who, according to Mather, won’t be called up for Opening Day on April 1, but will be called up later in the season so it does not affect his service time. Mather is just handing Gilbert the money from the grievance Gilbert will eventually win.

Last year, the Mariners offered outfielder Jared Kelenic a six-year deal with team options to make it a nine-year deal. Kelenic quickly declined, willing to bet that he could do better after those first six years. Now the Mariners won’t call him up which, to fans, seems like retribution for his refusal to sign the extension. Mather confirmed this for all to hear on YouTube, and Kelenic, the fourth-best prospect in baseball, took note of it, immediately filing a grievance with the team.

Mather also discussed Julio Rodriguez, the fifth-best prospect in baseball, who is anxious to get his well-deserved playing time in the MLB. For a team that needs to fill in the corners of their outfield around 2020 AL Rookie of the Year Kyle Lewis, Kelenic and Rodriguez fit the bill perfectly. Yet, Mather admitted to the Rotary Club that he will not play Rodriguez until 2022; this keeps him under the Mariners control until he is 29 years old. These comments were supplemented by some rather uncomfortable admissions that Mather made about his team, including the mistreatment of employees, extremely one-sided TV deals, players he wants off the team (sorry, Kyle Seager) and refusing to pay for translators for non-English speaking players.

The city of Seattle has a long, distorted history with the sport of baseball that keeps getting more complicated. The Mariners are also the only MLB team that has never played in a World Series and are currently riding the longest playoff drought of any team in any of the four major professional sports: 19 years. In 2001, the Mariners seemed to be heading in the right direction, setting an MLB record with 116 regular-season wins. But in one of the postseason’s biggest disappointments, they lost to the Yankees in the ALCS in just five games. Historically, Seattle has been home to some of baseball’s biggest superstars — Ken Griffey Jr., Alex Rodriguez, Edgar Martinez, Randy Johnson, Ichiro Suzuki and others. Between Martinez (designated hitter), Griffey Jr. (outfielder), Rodriguez (shortstop) and Johnson (pitcher), it could be argued that the Mariners had four of the best position players to ever play the game: all at the same time on the same team.

Mather’s comments and resignation adds another layer to this long, convoluted history of the Seattle Mariners. A team with this much potential and talent should be able to get its act together and win a World Series. Yet organizational incompetence, as clearly evidenced by Mather’s blunders, has defined this winless team. Will any of this change? Will the Mather-less Mariners take risks with their young talent and put together a competent, competitive MLB roster? The Mariners are writing a new page in their story and anything is possible.