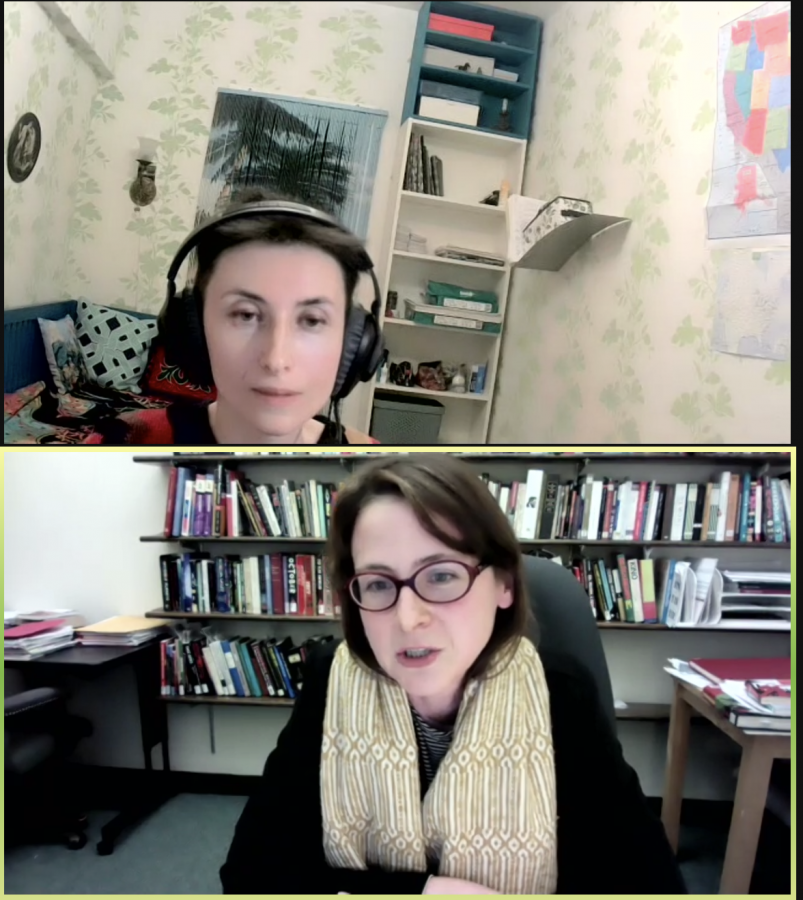 On Wednesday, Feb. 24, the Russian and Eurasian Studies Department in collaboration with Women’s Studies and the Art and Art History Departments held a webinar showcasing Victoria Lomasko and her book Other Russias, which tells the story of the different and diverse experiences of Russians whose stories would otherwise be invisible to the world.

Lomasko is a graduate of Moscow State University where she studied graphic arts. She uses her artistic skills to explore contemporary Russian society and subcultures such as LGBTQ+ activists, migrant workers, sex workers and others. Much of Lomasko’s work is based on her methodology of finding hidden narratives from the Russian people.

Lomasko centers her work around the quote, “the majority of citizens in Russia were and are and continue to be invisible.”

Her books and art are a way to bring visibility to those people, giving them shape and color. She focuses on catching fleeting moments that would otherwise be lost. Lomasko does not consider herself to be a political artist; she does not want to be an activist to change societies. She is more interested in telling stories.

One example of the stories she tells is when she was invited to teach art classes in a juvenile prison for a month-long period. There is very little reported about these prisons and even less that is allowed to be shown. Lomasko saw this as an opportunity for art to work around restrictions and share the different perspectives and experiences of those individuals in the prison.

In another project, Lomasko traveled to rural schools to depict what lives were like in isolated areas of Russia. She used her art to show the very stark divide between living in Moscow and living in the country. Some of the students reportedly did not know what Moscow was. Their isolation was so complete they had no knowledge of the outside world.

The lecture focused heavily on the ongoing protests in Russia that erupted in response to the arrest of opposition leader Alexei Navalny. The protests are the largest to have taken place in the past decade. Lomasko walked participants through her involvement in these protests and how she viewed them from an artist’s perspective and as a Russian citizen.

“At first, we were all viewers of all these exciting events. But after the release of the video, Alexei Navalny called for everyone to go out in the streets against Putin’s regime. So each of us once again found ourselves in a situation where we cannot just live our lives as usual but have to make a choice: whether we go out to the streets and have our voices heard or just stay home,” Lomasko said. “I asked people who I know and were planning to go to the rally why they will go. Participating in rallies in Russia can easily end in injury, receiving a large fine, losing of [a] job or even going to prison. The majority answered that they felt a historical event will take place, and therefore it’s impossible not to take part.”

Lomasko said that she did not attend one of the first protests because she felt the risk was too great, but went to subsequent events in order to capture the moments in art. “My main challenge now is to figure out how to tell stories when all public events are forbidden, and it is impossible to draw under police batons,” Lomasko said.

At these events, Lomasko created real-time pieces which reflected the experiences of the protestors as well as the danger they placed on themselves. These narratives that Lomasko recorded were another way of memorializing the narratives of ordinary Russian citizens and their personal narratives.

Junior Celia Meyer offered her perception of Lomasko going to these protests and taking an active role.

“I was most impressed and completely in awe of the fact that Victoria actually went to the events (protests, etc.) and did live illustrations of the happenings, political or not, at these events,” Meyer said. “I have done art and taken art classes my entire life and think that what she is doing is so incredibly impressive. Her illustrations are extremely informative and hold just the right amount of detail to get her strong messages across.”