After an Unprecedented Winning Streak, Men’s Soccer Falls to Louisville 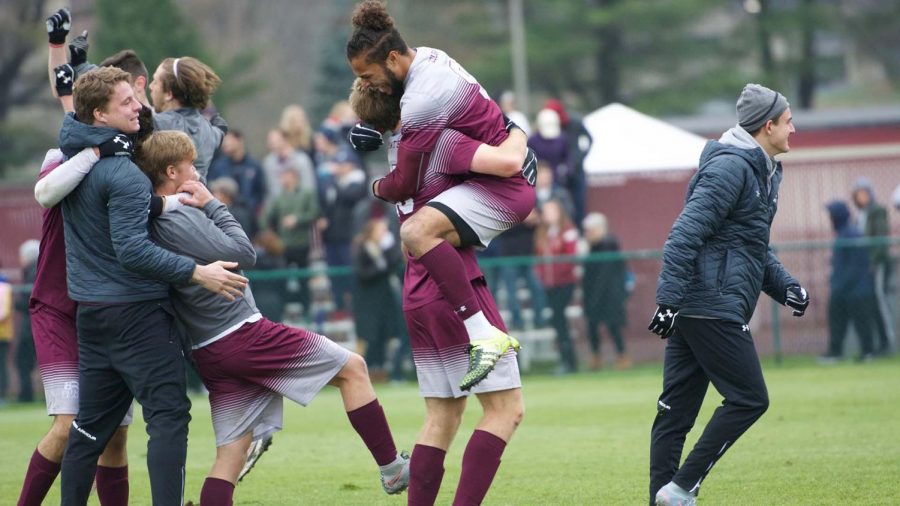 The men's soccer team made it through the first two rounds of the NCAA Division-I tournament beating UMass and UMichigan, but fell to No. 4 Louisville in the third round.

The Colgate men’s soccer team’s “Cinderella” NCAA tournament run came to an end on Sunday night as the Raiders fell 2-0 to the fourth-seeded University of Louisville Cardinals in Louisville. The Raiders, coming off a 3-2 come-from-behind win over the University of Michigan the previous weekend, came into the third-round game as one of the hottest teams in the country with seven straight wins, including the program’s first two NCAA tournament victories.

Colgate’s speed up top and through the middle gave the Raiders a couple opportunities early in the first half, but they were only able to muster a single shot on goal. The Cardinals controlled possession and kept the ball in its attacking half, however, failed to create significant opportunities as the Raiders were able to lock down on defense and disrupt passing lanes into the box. The pace of the game picked up after twenty minutes of play as Louisville moved the ball with more authority and Colgate used the team’s speed to create opportunities. Neither had much luck putting shots on goal as the Cardinals consistently misread passes and sent the ball straight to into Colgate’s defense, and the Raiders received two offsides calls against them in a 10-minute period.

That changed in the 30th minute, when Louisville midfielder Tim Kubel’s strike went just north of the crossbar. Kubel was able to get another chance just two minutes later when he took a strike and fired a laser from just inside the left corner of the box. However, Colgate’s sophomore goalkeeper Jacob Harris was able to make a diving save and wrap the ball up to keep the game scoreless. Kubel’s luck changed in the 35th minute when he sent a corner kick from the right to the top of the six-yard box and forward Tate Schmitt headed the ball into the near corner of the net to give the Cardinals a 1-0 lead. The Cardinals were able to double its lead six minutes later when defender Ziyad Fekri sent a long ball inside the six-yard box that found the shoulder of midfielder Walker Androit who deflected it in to give the Cardinals a 2-0 lead. Colgate would not be silenced though and was able to apply pressure in the final minutes of the half. With under a minute left, senior midfielder Jared Stroud intercepted a clearing pass from the Louisville defense, and made a run up the field before sending a through ball to Kentaro Morrison. Morrison’s shot beat Cardinals keeper Will Meyer but sailed just inches past the post.

To begin the second half, Louisville was able to maintain pressure and possession as well as create opportunities with runs into Colgate’s box. However, Harris was able to make a couple saves to keep the game within reach. Colgate’s best opportunity to cut into the Cardinals’ lead came in the 70th minute, when Stroud sent a corner kick into the box. In a play reminiscent of the prior week’s game winning goal, junior defender Aram Ouligian got his head on it, but sent it over the crossbar. Both teams continued to make probing runs, but neither was able to put a shot on goal for the remainder of the game and Louisville ran out the clock to win 2-0.

“I believe that this is going to motivate our young men and this program to greater heights. I’m so proud of these players and this program. I thank the alumni and the Colgate community for all of their support throughout this incredible journey. The response and support that we got was outstanding. I feel so much pride for this program and this institution and I know this is a sign of great things to come,” head coach Erik Ronning said.

The Raiders finished out the season with an overall record of 12-11-1. This season saw a number of historic successes for the team, including their second consecutive and seventh overall Patriot League title. The team also became the first-ever No. 6 seed to win a Patriot League tournament, and notched their first-ever victory in the NCAA tournament when they upset UMass in the first round. Additionally, the Raiders are the first Patriot League team to reach to Sweet 16 since 2006, and accrued the longest winning streak the team has seen (seven games) since 1968.