Around the Hill: Who is the Midseason NFL MVP? 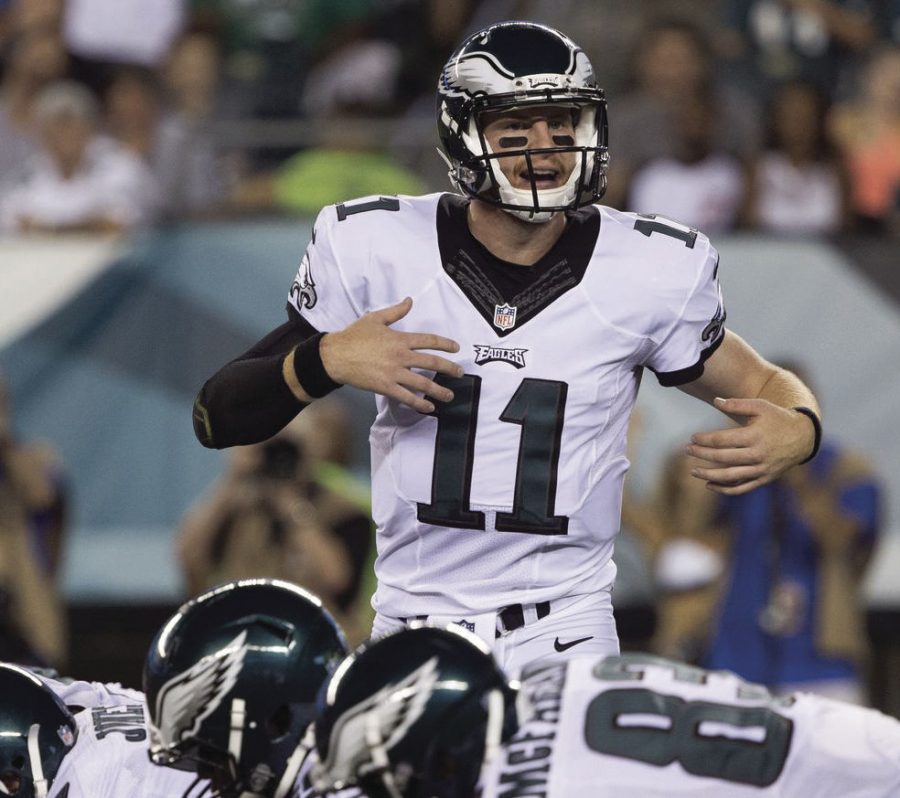 At the season’s halfway point, Philadelphia Eagles’ QB Carson Wentz is in the center of the MVP discussion.

Question of the Week: Who is the Midseason NFL MVP?

As much as it pains me to say this, the likely midseason MVP for this 2017-2018 NFL season has got to be Carson Wentz, quarterback for the Philadelphia Eagles. He is putting up historic numbers in only his sophomore season and is leading the Eagles to the best record in the NFC. There is nothing I hate more than to see the Eagles succeed, but with Wentz at the helm, their future is bright. Now, mind you, this is a fairly popular opinion. There is a borderline consensus among sports’ most prominent talking heads that Wentz is the early favorite for Most Valuable Player. If you know me, you know that I am all about the hot takes. I posit that Wentz is a product of his system; it is hard to fail with his tremendous offensive line, elite defense, Doug Pederson’s erudite coaching and the talented backfield/receiving core.

The midseason MVP therefore, in the spirit of hot takes, is Alex Smith of the Kansas City Chiefs. He has led his team to the third best record in the AFC despite a truly flawed defense. Their defense has allowed a dismal 390 yards per game so far this season, the third worst in the NFL. Why am I talking about their defense? Because as it should be obvious to anyone who has watched the Chiefs this year, their porous defense couldn’t stop a drunk underclassman streaking across Whitnall Field. For this team to be a top contender and an early playoff favorite means that something or someone is doing exceptionally well. That someone is Alex Smith, who is playing near perfect football and leading his team to victory. The MVP is not the person who puts up the best stats; it is the person whose team, without this individual, would suffer the greatest.

As a lifelong New York Giants fan, you can understand when I say that this season has been a major disappointment. On top of the disastrous season for my favorite team, the only team I root against is leading their division and on a five game win streak … yes, the New England Patriots. And this success is all thanks to … yes, Tom Brady. Despite my bitter sentiment towards this dynasty, as a sports fan, I must respect the unrelenting dominance Brady and the Pats have displayed year after year. This season, Brady is carrying an especially heavy load of the Patriot’s offense and has handled excellently just as anyone expected. The 7-2 record Brady has carried the Patriots to is why he is my midseason MVP.

So far in 2017, Brady leads the NFL in passing attempts, passing completions, and passing yards. He is averaging over 30 yards more per game than any other quarterback in the league and is tied for the fewest interceptions. The lofty expectations that many casual NFL fans have attached to Brady skew these dominating stats to seem normal. These expectations greatly hinder Brady in these discussions as his extraordinary value to the Patriots’ offense is made to seem more ordinary.

Many people might pick Carson Wentz as their midseason MVP; I can explain this by the same expectation argument. Wentz is backing up a great rookie season with a better sophomore season, which is rare among quarterbacks. Not only that, he has also led his Philadelphia Eagles to a league-best 8-1. However, do not let this breakout season for the Eagles boost Wentz’s value on the field. To compare with the numbers I listed for Brady earlier, Wentz ranks 14th in attempts per game, 16th in completions and 12th in yards per game (more than 50 yards less than Brady). In comparison, it is difficult to argue that Brady is not playing a larger role in his team’s success than any other player in the league.

The best argument for an MVP performance is how truly important a certain player is to his team’s survival. That’s why I like the baseball sabermetric wins-above-replacement so much. Alas, football straggles behind in that area of insight, but I don’t: Russell Wilson is the NFL’s MVP so far.

Pretty hot take, I know. Using common logic, Carson Wentz totally deserves this half-honor. He’s been so clutch and so important for Philly, but what’s the fun in picking the most obvious choice? Russell Wilson has, this season and these past six seasons, been the paragon of stability for Seattle. The team has been mired in its classic offensive line and backfield confusion in 2017. Wilson, getting the hang of this thing, has put up some of his career’s best numbers at the midseason mark. He is currently second in passing yards with 2,543 (over 300 more than Wentz), 2nd in passing touchdowns with 19, 2nd in game-winning drives and 1st in comebacks. Not to mention, he has tallied 291 rushing yards, eclipsing his entire rushing total from last season in merely nine games.

Wilson is always under duress. Each time he steps back in the pocket their porous offensive line makes him sprint backward for his life, evade significantly taller defenders and pull off something miraculous. That’s what he’s been for Seattle this season: miraculous. With more key players falling prey to the injury epidemic, let’s see if Wilson can keep his play up and contend with Wentz for the MVP crown.