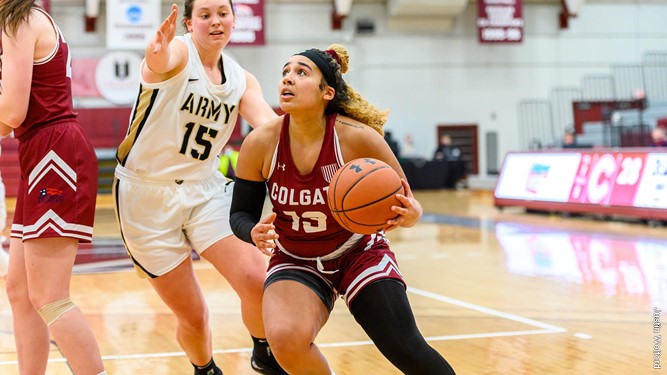 Women’s Basketball player senior Keelah Dixon is Colgate’s student representative on the newly formed Patriot League Anti-Racism Commission. The Maroon-News sat down with her to discuss her role and goals for the group.

Q: How did you get involved with the Commission, and what was the whole process like?

A: Over the summer, with all the activism going on, it became a conversation that something needed to happen on the league level. First, the women’s basketball teams in the Patriot League were getting together and trying to start some initiatives, and then eventually the Patriot League said we should do it as a whole, with every university and every sport. Athletic Director Nicki Moore called me over the summer and asked me if I wanted to be the student representative, and I was excited to get involved.

Q: What does the Commission do on a general level, and how are you involved?

A: We have bi-weekly meetings, and we have smaller group sections — I’m in [sections on the] league and NCAA policies. I chose this group because I wanted to learn more on how to act on issues of racism and prejudice on the highest level. From the top down, how do we change policies and address these issues? I’ve been fortunate to learn about what is actually talked about at the top of the Patriot League. My major contribution is the creation of the Student Athletes of Color Leadership Council (SACLC). What’s great about the commission is that there’s a student-athlete perspective in it, but that students didn’t necessarily have to be a student of color. I wanted to unite students of color across the Patriot League together to have some solidarity and unifying goals. I felt like it was important to hear the experiences of student-athletes of color across the league.

Q: In hearing different stories from student-athletes of color, and through understanding different league policies, what has been the biggest thing you’ve noticed and want to change?

A: The major thing I’ve noticed is that it is flat-out hard. There is always so much pushback to change, despite how valid we feel these movements are. We’ve come to understand that we need certain initiatives that we really need to push for versus having an abundance. But it’s been wonderful to hear different experiences. There have been a lot of a-ha moments — there have been a lot of unifying experiences where we’ve said ‘oh, that happens at your school too?’ But at the same time, I’ve also learned that student-athletes of color have very different experiences as well. That’s why creating the SACLC was so important — to highlight that and also to bring that to administrations at the league and institutional levels, and to let them know what we actually need.

Q:  What are some policies that the council is pushing for? And what are some larger goals that you have for the Patriot League and the NCAA?

A: Most of the policies so far have been about hiring practices. At the end of the day, we need people of color in these conversations, and right now they’re not. We just need more representation — that’s the best way to have a closer connection to these issues. When I’ve met with student leaders and department heads within the Patriot League, it has simply not been as diverse as it needs to be. So that’s our major goal overall right now. The SACLC recently met to confirm our mission statement, to decide what we’re going to be and what we’re going to continue to push for. A lot of times when you create groups like this, the Patriot League will reach out and say “can you guys send videos or pictures?” so they can “media-cize” us and say that these are our student-athletes of color. Of course, it is great, but at a certain point it was beginning to get overwhelming, and we wanted to ensure that we weren’t just a group that meets and were only here to be put on Instagram or Twitter. We’re fine with this as long as we are getting the support that we need in terms of attention and funding — to have a budget to do a speaker series or hold events.

Q: What has been your personal experience with the group so far, and what do you hope to bring to it?

A: I was genuinely just excited to see some other students of color when it started. That first Zoom that we had was definitely a bit nerve-wracking to lead, but it was just awesome to hear and see faces that look like you that were all unified under this role as being athletes in the Patriot League. It was just so important to me to be able to have that connection to people, to be able to help and support each other. Obviously, being a senior, I won’t be here to lead it next year, so a major focus of mine is how I can leave this legacy and make sure this is something that can be sustainable. We have leaders coming up, and I want to be the best leader I can be so they can shadow that and then take those action steps. When I’m no longer a student, I still want to see this group support each other and hold the Patriot League accountable for the Anti-Racism coalition they’ve created and this group we’ve created as an extension of it.