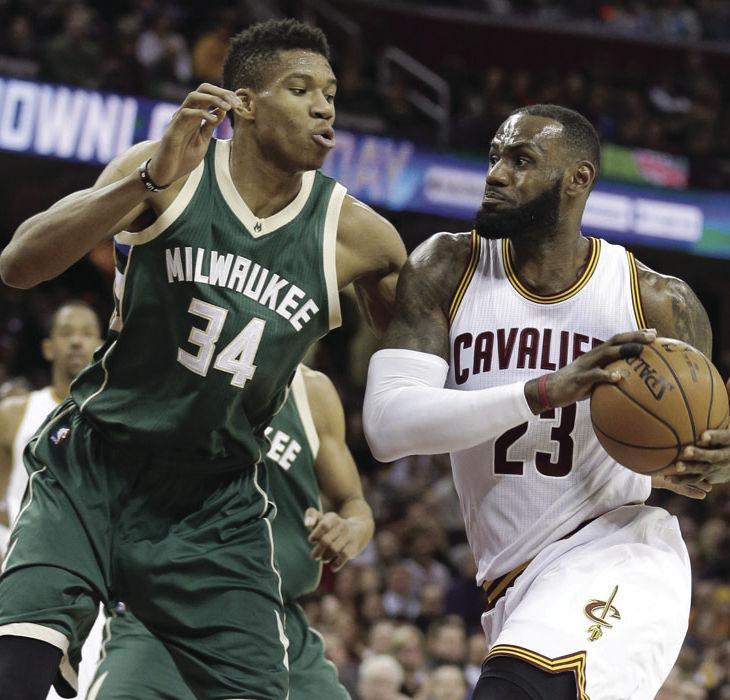 Giannis Antetokounmpo is emerging as the latest NBA superstar and is looking to capture his first MVP Award.

Question of the Week: Who Will Win the 2018 NBA MVP Award?

The 2018 NBA MVP is one of the toughest awards to predict. The NBA is a league of stars, and there are at least 10 superstars who have a chance. LeBron James, Steph Curry and defending MVP Russell Westbrook all will have great seasons and be in consideration. But I predict that the real 2018 NBA MVP will once again be Kevin Durant’s mom.

To clarify, his mom isn’t going to actually be voted MVP, but the man behind the mom will win the honor. KD can do it all. He’s the basketball equivalent of a one-man band: he can do it all. But the special thing is that KD doesn’t have to do it all. He’s surrounded by other superstars, so opposing defences can’t just focus on him. After averaging 35 points and eight rebounds on his way to being named Finals MVP, Durant is poised to dominate.

The haters might say that because KD is on the Golden State Warriors, he’s not going to stand out and won’t have the numbers for MVP. After all, the Oklahoma City “Russell Westbrooks” were carried by one guy, and he put up huge numbers en route to his MVP victory. I argue that KD will put up huge numbers in spite of having to share the ball around to his extremely talented teammates, which makes it all the more impressive.

The 2018 MVP race will be an interesting one, as there is no clear favorite as there was last year. Reigning MVP Russell Westbrook will most likely not be able to repeat last year’s absurd numbers due to the addition of perennial all-stars Carmelo Anthony and Paul George to the OKC Thunder. One person who always has, and always will, come up in the MVP conversation is four-time winner Lebron James. His age and focus on team basketball will not allow him to produce the numbers of his past, and he will not win his fifth MVP award. James Harden was the runner-up last year, but his tenure at point guard is over with the Rockets’ addition of Chris Paul. Harden will likely have a tremendous season, but the talent around him will detract from MVP conversation. I can safely count out anyone on the Warriors for MVP, as their team-minded basketball strategy will prevent one player (Curry or Durant) from taking home the honors.

The MVP of the 2017-2018 NBA season will be Giannis Antetokounmpo. The Greek Freak, a five-position player for the Milwaukee Bucks, has already demonstrated his leadership abilities despite being only a bit older than Colgate seniors. His playmaking ability and aptitude to take over the court will put him in the conversation, but it’s the lack of talent around him that will allow him to take home the trophy. The Milwaukee Bucks will make the playoffs, maybe as the seventh or eigth seed, but Antetokounmpo will be seen for the leader he is. The young and rising star has a rare combination: the athleticism of a young Lebron, the basketball IQ of Steve Nash and Kobe’s drive to be a champion – the “Mamba Mentality.”

Last season’s MVP race was as exhilarating and heated as an NBA fan can hope for and there’s no reason to expect any less out of this year’s. In today’s NBA with more and more superstars joining forces, predicting this sort of race becomes increasingly difficult. There is no player destined for a vengeful 30-10-10 season that we saw out of Russell Westbrook. The top vote-getters last year, Westbrook and Harden, both had new all-stars join their teams this offseason which will certainly take some time to get used to. With such an impactful offseason that will certainly alter the landscape of the league, there is one player I can always remain confident in: LeBron James. LeBron is my pick for MVP this season because of his proven consistency for greatness and the extreme importance of his role for the Cavs this season.

The main concern with LeBron is his age as many of the other contenders are younger and closer to the peak of their prime years. However, even in his 15th season, it would be foolish to expect any regression from the King. With his veteran experience, LeBron has continued to develop his all around impact on the court, proven by his career highs last year in both assists and rebounds. With the swapping of Kyrie Irving for Isaiah Thomas (who will be out due to his hip injury), LeBron’s value will inevitably increase as he will keep growing as a playmaker and leader of the Cavs on both ends. There will be no adjustment period for LeBron as he remains in his system and, with the reuniting of his banana-boat pal Dwyane Wade, he will be as comfortable as ever.

Also, from a legacy standpoint, this may be one of the last years LeBron can seriously expect himself to be at the top of the MVP race. If he can secure another MVP award, it will only add to his already undeniably stacked career accomplishments.