Performing Virtually During a Pandemic 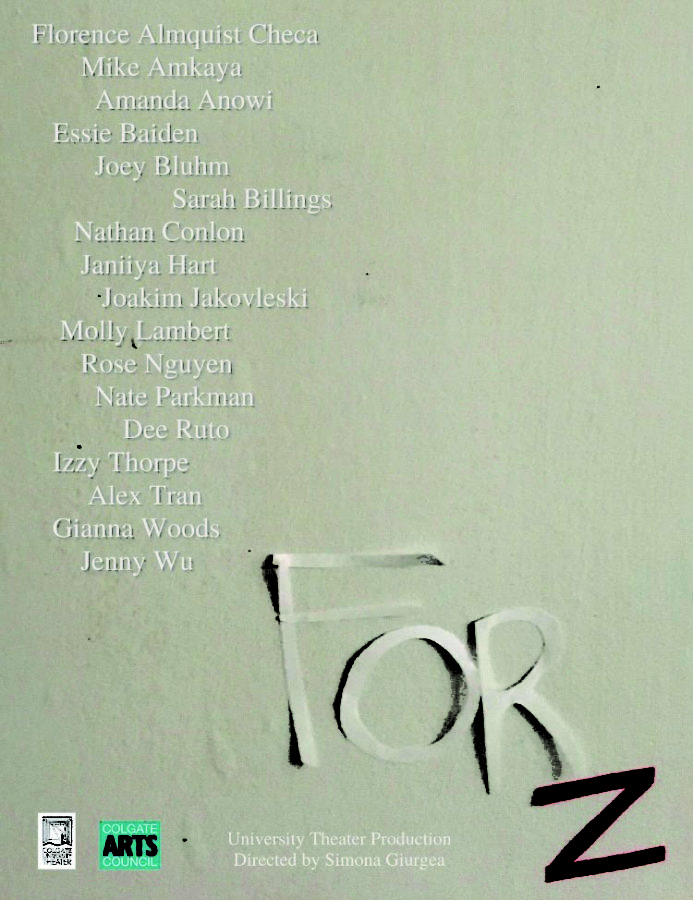 In light of the coronavirus pandemic, students at Colgate enhanced their conventional theater knowledge to perform the play “For Z,” requiring them to use novel problem-solving skills to present it to the rest of the Colgate community Dec 7-9 of last semester. Junior Sarah Billings explained the concept of the performance in addition to the meaning behind its title.

“‘For Z,’ as we called it, represents us, Generation Z, and all the amazing but complicated aspects of our lives that we’re encountering right now. All the different monologues were inspired by the life of each member in the cast and what they wanted to communicate to the world,” Billings said.

“Set in the real geopolitical climate of global warming and racial violence, of political polarization, of international conflict and of the COVID-19 pandemic, we ask the question of what theater meant in this time, either a ‘spectacle of the world’ or ‘interior spaces of our being,’” Tran said.

Although coming from all different backgrounds and concentrations, many of the students including stage manager Gianna Woods, actors Isabelle Thorpe, Tran, and Billings regarded Senior Lecturer of University Theater Simona Giurgea with high esteem, exclaiming that she was a motivating factor for their participation. Because the nature of the performance was centered around this generation’s experiences in the present moment, there was a lot more flexibility in its production, and Giurgea worked closely with students to include their own input throughout the process.

“Normally, actors get assigned their role and work to understand everything about a character that already exists. In this play, we took the first two weeks of rehearsals just to brainstorm the kind of character we wanted and what we wanted our part to look like,” Billings said. “This actually made it easier to manifest on Zoom, I think, because we could mold it in the way we wanted — more one-on-one scenes, more intimate, more casual.”

Tran also felt that this performance gave him the opportunity to explore creativity more.

“Writing to me is looking inward to look outward. This play has given me the opportunity to connect to myself and branch out to the world in ways I would never have in other classes,” said Tran. “[My] favorite part [was] definitely building my own character, transcending boundaries of reality and ethereal fantasy, of my own body and of the binary of gender.”

However, some of the cast said they also faced challenges rehearing over Zoom and understanding how to act in a virtual environment.

“Losing those in-person interactions can make everything seem a little more awkward and a little less real, which held up in trying to bond as a cast and do our scenes together. At one point, we spent about 30 minutes of rehearsal just trying to figure out who was next to who on our screens so we could make it seem like we were handing something to each other…  safe to say it was not as easy as it might seem,” Billings said.

“I found the virtual format of this production to be quite difficult. I didn’t know how to do my monologues without looking weird at my camera, and I felt like I was stagnant on the screen. I felt like being a part of this production was also really hard because it required a lot of extra time on the computer on top of virtual classes,” Thorpe added.

“I think when doing a performance, there’s always that feeling right up till the end where you feel like ‘I could have done more, I could have done better.’ This felt even more so like that because we had filmed ourselves; it wasn’t even live where you can find comfort in the fact that you aren’t able to go back and redo it. I’m also not used to watching myself so up close and personal, so it was difficult for me to not be too critical,” Billings said.

Woods also felt that the completion of “For Z” did not quite give her the same adrenaline rush as a live performance would have.

“I still felt accomplished and proud, but it just wasn’t the same. All the work was done and there was no performance to cross my fingers through or call cues for,” Woods said.

While pre-recording was difficult and less climactic, it opened up new doors for how this performance could be filmed, which members agreed enhanced its quality.

“My favorite part throughout the process was recording the last scenes in the Grey Room. We did this in the actual theater with a videographer/light designer/sound designer, and it was a completely new experience to me. I loved being able to interact with the camera. We were in a room that was a projection on all four walls, and the images were amazing,” Thorpe said.

“This would have never happened if we were allowed to have an audience in the theater, so that made it really cool to enhance the performance,” Billings added.

The performance’s challenges, creative solutions and novel experiences have left the cast with a different appreciation for theatre.

“I think that it has prepared me to work in a unique environment only a few have been accustomed to. It allowed me to gain and practice skills I would not have been able to in a normal semester,” Woods said.

Not only has the cast gained useful and unique skills, it also gave them a sense of normalcy and accomplishment in the era of the pandemic.

“What really made this experience unique was [that] we just went for it. This was our first semester dealing with COVID-19 restrictions and we had no idea what to expect for the rest of the semester. It really made me appreciate the Theater Department, how hard working everyone is and why it’s so important to make the most out of your situation,” Billings said. “I hope anyone who had a difficult time last semester or is still struggling this semester to have fun during the pandemic, remember that there’s still things going on! Now can be the time to try something creative, explore your skills and not let the restrictions overtake your college experience.”