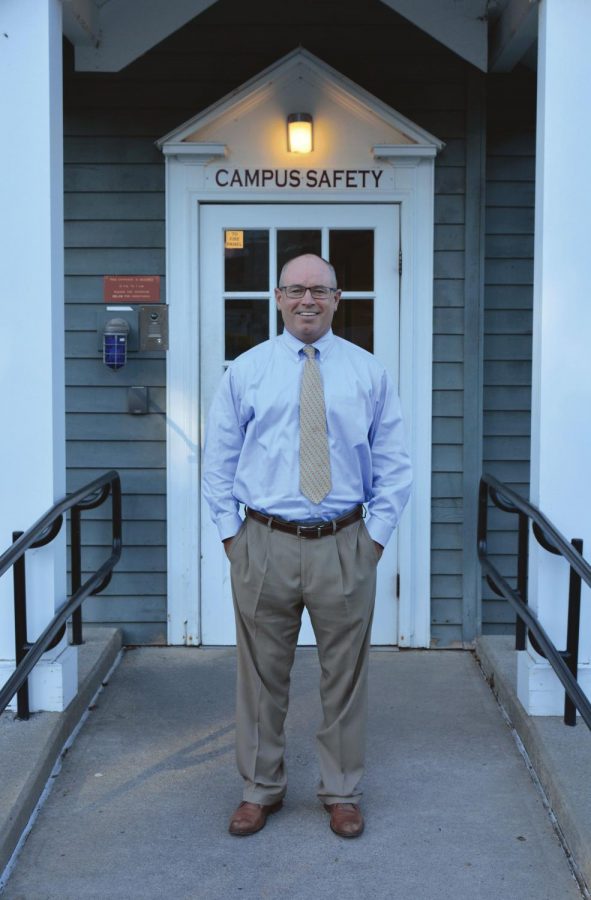 Dan Gough, pictured above, currently oversees the Department of Campus Safety. Gough’s goal is to build trust with the Colgate community and create a more student-centered approach.

Dan Gough, Colgate’s former Campus Safety Director, has returned to Colgate this year and is ushering in changes and improvements to Colgate’s emergency response system and Campus Safety protocols. Gough was the Director of Campus Safety at Colgate for more than five years. Last year, Gough spent the school year at University of California, San Diego, but returned to Hamilton in August to resume his positions. Gough spoke with The Colgate Maroon-News to reflect on Campus Safety improvements, emergency organizations and the glue gun incident that occurred last year, in which a student of color was wrongfully accused of possessing a weapon, leading to a campus-wide lockdown that lasted for several hours.

Gough oversees the Department of Campus Safety, the Department of Environmental Health and Safety, and the Emergency Management Program. He has a Bachelor’s degree in Psychology from Brown University, a Master’s degree in Emergency Management and served 11 years in the military. His first project this year was bringing together all three of his departments under one umbrella. By combining the departments and more closely managing them, he hopes to facilitate greater coordination between the departments that are primarily responsible for safety and security on campus.

The departments were also switched from the University’s Division of Business and Finance to be included in the Dean of the College Division. Gough explained that this will create a “more student-oriented approach to management of those programs.”

“It’s a closer tie to the students and student affairs,” he said.

The second project that Gough has spearheaded this year is increasing outreach to students, faculty and staff to both further educate them about Campus Safety’s role on campus, and collect feedback on how they are doing. Gough explains that outreach to hear feedback is imperative to “developing a strategic plan for continued improvement in our departments and program.”

Another portion of Gough’s outreach program is educating the campus community about Colgate’s Emergency Management Program.

“The Emergency Management Program, while Campus Safety is certainly involved and plays a role in it, is also managed … by the Emergency Operation Center, which is made up of professionals and experts from all across the university,” he said.

When an emergency occurs on campus, the Emergency Operation Center is activated and about 80 staff members from across the university congregate and help support the response team.

“And then that executive group makes policy decisions and mission guidance during an emergency,” Gough said.

Gough also stressed the deliberation and collaboration that goes into responding to Colgate emergencies.

“It’s important for people to understand that and not think that campus safety is the only one that’s responsible for responding to an incident. There’s a whole system behind that,” he said.

Other institutional changes that Gough has completed include increasing staff training, and creating a “more customer-oriented approach and business model” to Campus Safety. This will be completed by renovating the current Campus Safety building, to make it more accommodating to both the Campus Safety officers working there and the Colgate community seeking assistance.

“In the past when you’d come into Campus Safety, it’s probably been really crowded in our little space,” Gough said.

The renovations will create one reception desk for purely administrative matters like lost gate cards and parking tickets, and a separate space for officer dispatch and emergencies.

“You’ll get quicker service, better service, and the other thing that does is it frees up the dispatcher to concentrate on the safety and security … on campus as opposed to the administrative matters, so it’s a win-win for us and our customers,” Gough said.

Gough explained that one of the reasons that he came back to Colgate was the May 1, 2017 incident involving the activation of the alert system for what was believed to be an active shooter, but turned out to be a student with a glue gun. The mistake resulted in a campus lockdown for multiple hours.

“It’s one of the reasons I came back because I care so much about this community. And I assume ownership to a large degree in the development of our Emergency Management Program at Colgate, since returning I’ve certainly done a lot of research on the incident,” Gough said.

He explained that the staff had thorough internal and external reviews of the Emergency Management Program’s protocols, along with increased training and a “hazard vulnerability assessment on 46 different areas on hazards or threats.”

Gough hopes that the changes that have been made along with the continued improvements to their systems can help solve the problems that contributed to last year’s mistakes.

“Our goal is building stronger relationships with university community members which starts with building trust. We need to build trust after last years incident,” Gough said.

He also wants to emphasize the difference between law enforcement and Campus Safety on campus.

Gough believes that the mistaken association between the two leads to mistrust and negatively affects the relationship between Campus Safety and the university community.

“So when I hear someone say ‘Campo’ I respectfully correct them – we’re not Campus Police, we’re Campus Safety. I make sure they understand that,” Gough said.

Gough is pleased with the direction that Campus Safety and the rest of his departments are headed, and hopes that the improvements will continue.

“We are excited about all the progress and improvements we’re making and we want to make sure the students and the rest of the university community is aware” he said.