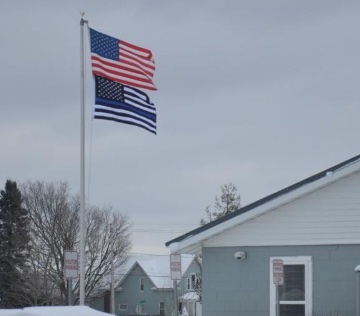 The Hamilton Area Anti-Racism Coalition (HAARC) continues to demand the removal of the controversial thin blue line flag hanging outside the Madison County Jail and Sheriff’s Office, citing the flag’s reminders of anarchy, racism and division as reasons for removal.

The black-and-white American flag with a single blue line meant to represent police solidarity, according to its supporters, has also been tied to white supremacy, as reported by The Marshall Project.

HAARC members, including John Bailey, see the flag as a pushback against the Black Lives Matter movement and a symbol of nationwide division associated with the Jan. 6 attack on the Capitol.

“When we saw that flag flying at the Capitol on Jan. 6, we wrote a letter to the board of supervisors asking for its removal from the county buildings. No matter what the original intent was this symbol is now divisive. It’s confrontational and political. It is now and forever will be a part of the worst days in American history,” Bailey said in an interview with CNY Central TV.

Chairman of the Madison County Board of Supervisors John M. Becker expressed frustration following the HAARC’s request to take the flag down.

“We at Madison County take offense to HAARC’s demand to remove the Thin Blue Line flag from our County complexes,” Becker’s Jan. 19 letter to the HAARC stated.

In response to Becker’s letter dismissing the demands of the HAARC, Martha Moore, a friend of Bailey’s, created a petition entitled “Remove the Thin Blue Line From Madison County Offices.” As of Monday, March 15, the petition has accumulated 13,840 signatures, just under its 14,000-person goal.

The Madison County Board of Supervisors voted on Mar. 9 in favor of keeping the thin blue line flag up. The vote was two to remove, 16 to remain, and one absent.

Colgate senior Genevieve McCarthy shared her opinion on the flag remaining up.

“The Board of Supervisors should see that it sends a threatening message to Black members of the community to be waving what is referred to as a ‘thin blue line’ flag but is really a Police Lives Matter/All Lives Matter flag,” McCarthy said.

In the same meeting, the board approved the HAARC’s Police Reform Plan. The plan included new measures such as 911 call coordination with mobile mental health services, increased crisis intervention training and a request for a better data collection system. The board also included a statement about not tolerating racism in the department in the final plan.

According to his previous interview with the Maroon-News, Bailey first noticed the flag when arriving at the Madison County Jail to hand-deliver the results of the HAARC survey on policing efforts.

“They also included in the final [Madison County Police Reform] plan, a statement about not tolerating racism in the department,” Bailey said. “This, maybe a nod to us, was the only mention of racism even though the whole process was supposed to be about racism! It did include some of HAARC’s recommendations specifically — one on the complaint process and another on better sources of cultural diversity and bias training. I think we made a small difference.”

Following the decision, Bailey spoke in a public comment portion of the meeting.

“On the flag resolution — I would like to thank the Chairman and the Board for using the democratic process. Although I do not agree with the outcome, as a citizen of Madison County, I respect the process which produced the decision. Going forward, may we all strive to have meaningful discussions, listen to all sides and have respect for everyone,” Bailey said.

Bailey also responded to the decision on the Police Reform Plan and its flaws.

“This plan does not go far enough to address and prevent the underlying racism that is the cause of so many ongoing horrific incidents where people of color are abused and sometimes killed by police, which was the reason for the executive order in the first place,” Bailey said.

“The police do need our support, but that support should not contribute to our divisions. It symbolizes a divide. An us-versus-them mentality,” Bailey said.

Volunteers in the HAARC responded to Becker’s letter, addressing their continued fight to remove the flag.

“Madison County has a proud history of being one of the centers of the abolition movement of the 19th century. We all, individuals and government officials, have the opportunity to continue that tradition of racial justice. We ask you again to remove the ‘thin blue line’ flag from our county offices. HAARC is committed to supporting Madison County becoming a better, more just, community for all of its residents,” the HAARC organization said in a letter posted on their website.