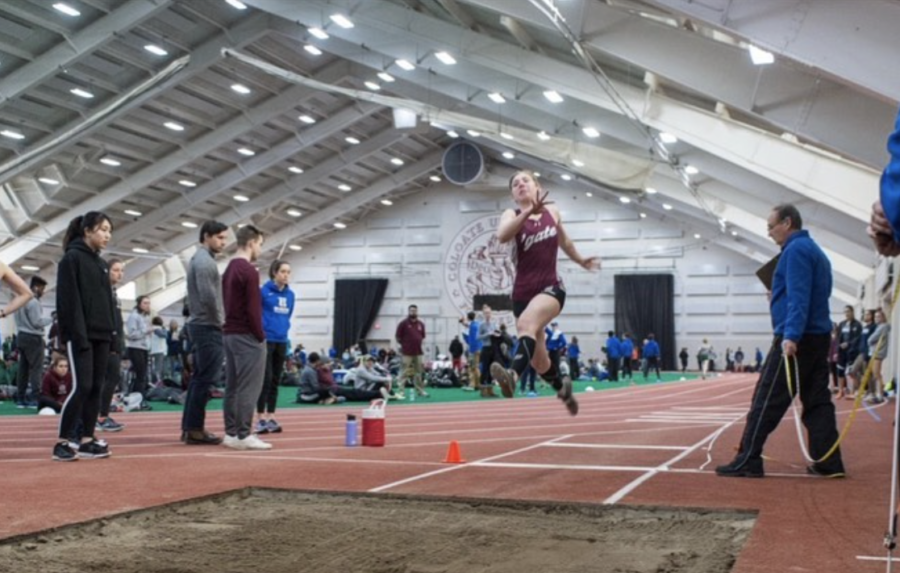 “I jumped 11.75 and then 11.81 and then 11.94 and fouled one. Those were kinda my progression of jumps and the record I broke was Marina Reilly’s record. She graduated in 2019, and she jumped 11.67 meters,” Schaaf said. “It was really nice to have that experience of working with her during that time,” Schaaf said.

Schaaf said she went into every practice as if they were meets and took them as seriously as possible. She worked heavily with Coach Zach Brown, a new addition to Track’s coaching staff this year, prior to the Pod meet, and he focused on controlling her adrenaline and overall technique.

The junior jumper had been dreaming of breaking that record since she was a first-year and now that she has, she’s been living on cloud nine. Schaaf mentioned that by having the Spring 2020 track season canceled due to the ongoing pandemic, it allowed for her and her teammates to build momentum for their 2021 season.

“You never know when track is going to be taken away from you,” Schaaf said. “It’s made us work harder and I know we’ve all been stronger and have this fire that we really want to compete and we really want to get better. Seeing if we can push it even further, Regionals, maybe even an NCAA championship. That is the absolute dream,” Schaaf said.

Track and Field is one of Colgate’s largest teams and Schaaf said that having so many of her supportive teammates and coaches around her made it that much more of an incredible experience. Schaaf described track as an individual sport where one’s own success can be considered as a team’s success. She said she was grateful to have her teammates and coaches go through this career accomplishment with her.

“I really did want to thank Coach Meaders for really getting in some great coaches for us since we’ve had a good amount of turnover. Bringing in Coach Pickett and Coach Brown this year I think has really helped turn the program around,” Schaaf said. “My teammates have been so supportive through all of this, during the meet and after the meet. They have just been awesome and I love them. Go ‘Gate!”

Schaaf’s track career is far from over and she still has over a year to break more school records. Her goal is to try to beat her own record and jump over 12 meters. Most triple jumpers aspire to reach that 12 meter benchmark in their jumping careers.

“I would really like to qualify for post Patriot meets,” Schaaf said, “I did actually for the ECAC championship with that jump. I’m really hoping that I continue to help my team succeed.”