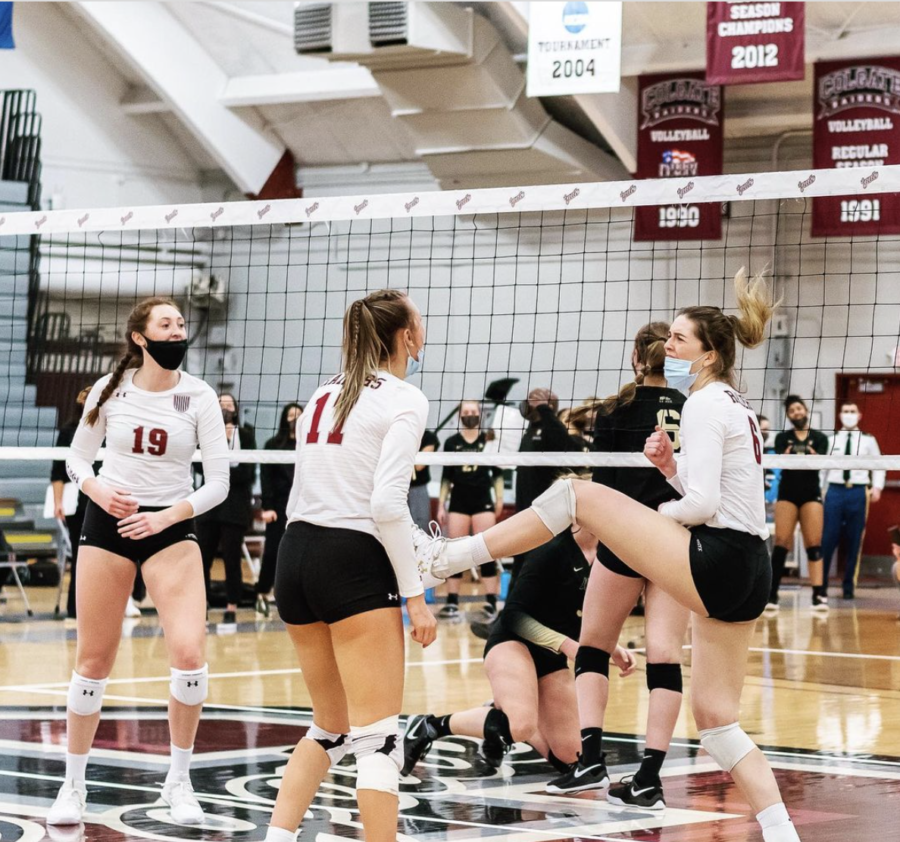 The Colgate Volleyball team capped off their season with a six-game win streak before their final two games were cancelled. With a record of 8-1, they have guaranteed themselves the top seed heading into the Patriot League Tournament, meaning that any opponents they face will have to beat them on Cotterell Court. Their first tournament game will take place on Friday, April 2.

The Raiders lead the Patriot League in almost every meaningful statistical category. Coach Ryan Baker highlighted that Kills (K) in particular, a statistic awarded when an attack is unreturnable, is especially important in determining wins and losses. The Raiders have led the league in that category for the majority of the season.

The team’s success is a product of a year-long commitment they made in the Spring of 2020, where they established a new set of regulations to help foster a winning environment for the team.

“Last Spring we worked really hard to make a new manual. We tried to build a culture within that. We made rules so the team could come together and unite as one,” senior Bridget Kolsky said.

After COVID-19 pushed back the season from the Fall to the Spring, the team’s new culture was put to the test.

“The two hours that we play our matches are the only times that we’re not thinking about COVID[-19]. All you can do off the court is follow protocols to protect yourself,” Coach Baker said.

Because of the pandemic, the team has had to adapt to several new policies. For example, they all agreed to forgo indoor dining for the semester in order to protect themselves and their teammates. Through it all, they were able to stay healthy and were rewarded with a dominant season.

Coach Baker also highlighted the team’s number of talented players who played off the bench in addition to their starters as a key to the season’s success.

“We have tremendous depth this year. When we got stuck in a couple matches or sets we could change the lineup and get back into the games,” he said.

He even said that many times he struggled to decide who should start and who should come off the bench. Kolsky agreed with her Coach’s assessment of the team’s depth, highlighting in particular the first-year players on the team who fit right into the team and played excellently all year.

“Our freshmen really stepped up. They did a great job coming into this culture that we established. We have more talent this year than we’ve ever had and everybody has made the sacrifices they need to make to be successful,” she said. “I’m so proud of everyone this year.”

Going forward, the team will have new challenges in the tournament. Their limited schedule prevented them from seeing teams they will have to play in the tournament, likely in the early rounds. When asked about the challenge of potentially playing opponents his team has not faced this year Baker replied, “When you know the other team on the other side of the net, you feel a little bit better about knowing what you have to do to stop the other team and what they’re going to do to try and stop you. On the other hand, it is nice to see some new faces and face new competition.”

Whoever they play, the Raiders look primed to contend for a Championship on their home court. But whatever happens in the tournament, they already have a superb record to be proud of and as Kolsky highlighted, the team is thankful they got to play at all.

“[The tournament] will be a hard competition for sure, but we’re just so grateful to be playing at all,” Kolsky said. “All we can do is play our hearts out.”