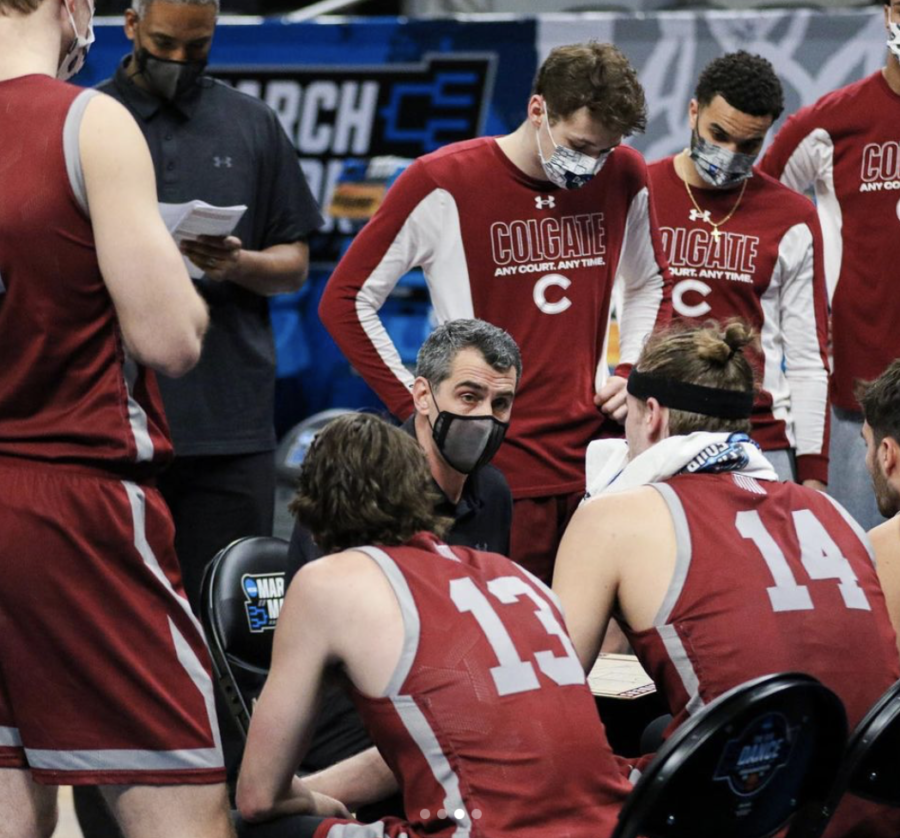 The Colgate Raiders Men’s Basketball team finished the season with their fourth March Madness appearance in school history. As a 14-seed in the 2021 tournament in Indianapolis, the Raiders lost to a high-powered Arkansas Razorbacks team in the first round, 85-68.

The Raiders had a very impressive 2021 campaign. They finished the regular season 11-1, playing an unconventional schedule due to COVID-19 in which they played against three opponents: Boston University, Army and Holy Cross. “In the year that we faced, everything was new and strange,” Head Coach Matt Langel said. “So we really just talked about not getting hung up on the circumstances of the season. We wanted to focus on whatever the next opportunity was.” Langel emphasized the strong mentality and focus of his players, despite the challenges of the pandemic.

“We just wanted to play,” sophomore Keegan Records added. “We played with the cards we were dealt.”

The 2021 Raiders were an elite team. Senior Jordan Burns had a very impressive season yet again, earning himself the Men’s Basketball Patriot League Player of the Year award and a first team all-Patriot League nod. Burns is the second player in Colgate history to achieve both honors in the same season. The guard averaged 16.8 points, 5.3 assists, 4.3 rebounds and a 1.5 steals a game. Langel had very high praise for Burns. “Jordan and I have been through a lot together. The four years he’s had here, it’s been a storybook type career.”

Alongside Burns, juniors Nelly Cummings and Tucker Richardson earned second and third team all-Patriot League respectively, and freshman Jeff Woodward earned a spot on the All-Rookie team. Senior Jack Ferguson was fifth in the nation in three point percentage, shooting 50.7% from beyond the arc. He was also 10th in the country from the free throw line, shooting 90% from the line. This team had a lot of great individual performances this year and they put up some incredible statistics.

Entering the tournament, this Colgate men’s basketball team was one of the most efficient teams in America. At the end of the regular season, they ranked ninth in the NCAA’s NET rankings, which uses a combination of factors such as winning percentage, strength of schedule, game location, efficiency and the quality of wins and losses to measure teams.

Colgate ranked in the top ten in the nation in assist to turnover ratio, assists per game, scoring margin and defensive rebounds per game. To add on to that, they had the best three point defense in the country and were the second highest scoring team in the country, averaging 85.2 points per game. Not often do you see a Patriot league team with those impressive national rankings, and that shows you just how good this team was.

Colgate cruised through the Patriot League tournament as the two-seed in the conference. They got past BU with a combined 48 points from Burns, Richardson and Ferguson, dominated Bucknell by 30 with an impressive performance from Records (21 points, 8 rebounds) and handled a Loyola team that upset some of the other Patriot League favorites with a 17 point, 5 rebound and 4 assist performance from Tucker Richardson.

On Selection Sunday, the Raiders were put into the South region to face the number three-seed Arkansas Razorbacks with esteemed head coach Eric Musselman. The Raiders flew to the Indianapolis bubble right after their Patriot League Championship victory, as Langel and co. entered the quarantine. “It was weird,” Langel said. The team had a whole floor of the hotel to themselves and the quarantine was very serious, but there were no complaints from the team or staff.

“It was very unique,” Records said, “but overall, a great experience.”

The game between the Razorbacks and Raiders, which took place at 12:45 p.m. on Friday, March 19, started off slow with two of the highest scoring teams in the country showing their initial March Madness jitters. This was the first game all season where Colgate had fans, and it was certainly felt. Attendance was around four thousand at Bankers Life Fieldhouse, “but it felt like 20,000” Records said. “Raider nation’s presence was certainly felt in Indy.”

Colgate got out to a 33-19 lead in the first half with three Jack Ferguson threes and some impressive post play from freshman Jeff Woodward. “I thought we got a lot of good shots [during that run],” Langel said. “We were sharing the ball and moving well and kind of executing what we thought would happen.”

Unfortunately after that, it was all Arkansas. The Razorbacks made some personnel changes, going with a smaller lineup, and they began to press Colgate. This led to a 17-0 scoring run to end the half. Arkansas got more athletic, better with the ball, penetrated and ramped up the intensity of the game.

Colgate did climb back into the game in the second half with a trio of threes from Jordan Burns, Nelly Cummings and Tucker Richardson, but it wasn’t enough for the Raiders as they turned the ball over 22 times. Arkansas showed off their athleticism and talent and ran away with it, finishing Colgate off with a 35-14 run to end the game. It was an impressive battle by the Raiders with some huge threes by Ferguson and impressive performances from Cummings and big men Keegan Records and Jeff Woodward.

When asked what he can take away from this game, Langel said, “For me, I just learned how good this team can be.” This performance certainly showed that Colgate can hang with some of the best teams in the country.

The Raiders will look to continue their Patriot League dominance next year. Colgate will lose their top two scorers in Burns and Ferguson, but will return key players from this year’s team: Nelly Cummings, Tucker Richardson, Keegan Records and Jeff Woodward. Their young frontcourt will be one of the best in the Patriot League next year with Records and Woodward, and Richardson and Cummings will smoothly fill the hole that Burns and Ferguson leave behind.

Although it will be a different team, Coach Langel is up for the task. “I’m incredibly excited as we start to think about next year’s roster, and I think the program and the team are in good hands.” Although Colgate has dominated the Patriot League, nothing is guaranteed in college basketball. “You’ve got to start it all over next year,” Langel said. “To me, it’s the best part about college athletics, when there are new opportunities for the next group of players.” Langel and the Colgate Raiders will look for another Patriot League Championship in 2022 and another bid to the NCAA Tournament.