The Artist Next Door: Bonnie Chin 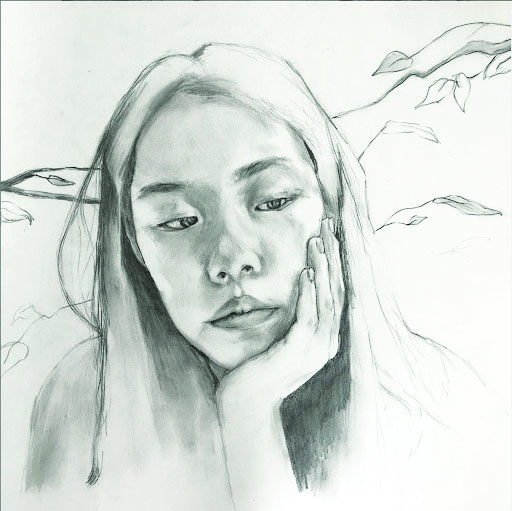 Printed with Permission of Bonnie Chin

Curious about artists on campus? Bonnie Chin brings a variety of artistic mediums to her viewers’ fingertips with her Instagram account @bonnie.chin. This account has received a considerable amount of support with 11.1k followers and counting. Her posts largely consist of portraits and feature pen and pencil drawings, paintings and the occasional piece of digital artwork.

“I started exploring the different mediums and I became obsessed with drawing portraits, people in particular which you’ll notice are on my account a lot. I really like how with art, even though we experience the world through all of our senses, you are only communicating visually to your viewers. I really like two-dimensional art. I think it gives people an experience that you can’t fully explain. The medium I prefer the most is watercolor or oil painting,” Chin said.

Although Chin prefers more physical forms of drawing and painting, she has also explored the digital world of art. She uses Procreate, a painting app on her iPad, to capture her chosen subject through a digital lens. Her Apple Pencil takes the place of her paintbrush, allowing her a chance to master different forms and perspectives.

“[Digital art] is very convenient because there’s no pressure because you’re not wasting materials. But I prefer traditional art because I like textures and being able to feel, a big part of art is what paper you use. Textures vary with paper and different mediums react with textures differently,” she shared.

Chin started her popular art account in 2015 with posts that mainly showcased hand drawn portraits. She noted the initial, gradual increase in followers at the start of her account and the dramatic influx of attention and support she received after posting a portrait of a celebrity. This post depicted Lorde in a hand drawn portrait that was painted with watercolors. Reposted by Lorde, this painting directed more attention to Chin’s work and social media platform. When asked if the popularity of her account is a source of pressure to her stylistic choices, Chin discussed the role this plays in her personal artistic process.

“I’ve always posted whatever I feel like and whenever I feel like because it is for me to document and share it with other people,” Chin said. “I have been really fortunate that early on I grew relatively fast with a few [posts] that kind of went viral. I’ve been lucky in the sense that I post something and hope people like it. I don’t really draw what other people want, I just kind of do whatever.”

Committed to sharing her art in a variety of ways, Chin also works on commissioned pieces. Although she pursues her stylistic interests on her Instagram account, she is more conscious of outside influences when working on a commissioned piece. Bonnie described the public preference for realistic depictions of subjects, which differs from her personal preferences but largely shapes her approach while creating these commissions.

As a busy student, Chin schedules time for her art, but she has recognized a difference in her routine this year due to the effects of the pandemic. In previous years, after an active day around campus, Chin was able to sit down and focus on her art during scheduled times. However, due to the sedentary nature of everyone’s current world, she often finds herself distracted by various tabs on her computer, a familiar feeling to almost every student. Although her usual routine has been disrupted this year, she still finds time for her art.

“This year it has been sort of hard because ever since COVID-19 there’s always something you can find to do on your laptop. When I do art, it’s very meditative so I can get lost in time. I have a rule for myself that I can’t draw at night because once it’s 9:00 or 10:00 if I start drawing, I will never go to bed. It’s gotten harder now that we’re in a pandemic. For me, it’s also a form of self-care,” she said.

Chin is currently concentrating in computer science and economics and has drawn parallels between her artwork and other areas of study. Although the two subjects seemingly occupy spaces at opposite ends of the academic spectrum, her experience with art has largely shaped the way she conceptualizes her classes and has encouraged her to apply a wide array of perspectives to problems.

“I landed into econ and comp-sci because all the theories help you understand the world in so many different ways you didn’t think about before,” Chin said. “Comp-sci is creative problem solving. I use a lot of my artistic abilities to look at the world around me and communicate with people.”

Chin hopes to integrate her love of art into her future, with many goals populating her vision for it.

“I have an impossible list,” she said. “One of the things I put on it was that I want to own a gallery.”