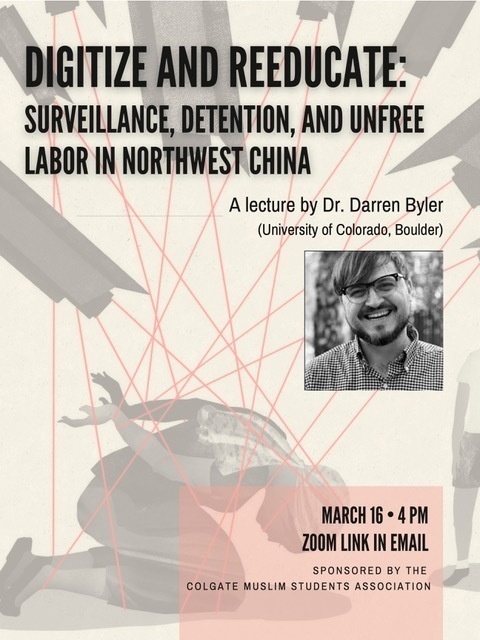 On Tuesday, March 16 at 4:00 p.m., Dr. Darren Byler spoke for Colgate students and staff in a virtual lecture, sponsored by the Muslim Students Association, titled “Digitize and Reeducate: Surveillance, Detention and Unfree Labor in Northwest China.” Byler’s presentation was followed by a question and answer session from students and faculty in attendance. Dr. Byler is a postdoctoral fellow at the Center for Asian Studies at the University of Colorado, Boulder. His first book project, titled “Terror Capitalism: Uyghur Dispossession and Masculine Violence in a Chinese City,” will be released this fall and its topics were discussed throughout the lecture. Byler explained how two groups of Muslims, Uyghurs and Kazakhs, currently reside in the People’s Republic of China but at one point had their own recognized homelands in the mid 20th century. The talk specifically focused on the Uyghur experience in China, particularly how their religion is viewed by the government of China and how they are manipulated by the government.

Byler then discussed the use of social media and virtual networking platforms, such as WeChat, by Uyghur Muslims (who are mostly Sunni Muslims). Byler noted that WeChat allows people to break through the censorship in China, especially for Uyghurs. Since messaging in mosques was censored by the Chinese government, Byler explained that “real Islam” was happening on cell phones, where Uyghurs were able to find their place in the Muslim community after being isolated in Asia for so long. Because of the use of social media, there was a piety movement among the Uyghur population; women started dressing differently, men started growing beards and people became more in touch with Islam. The Chinese government became concerned about this movement, conflating piety with violence, especially after an instance where Uyghurs attacked Han Chinese people. While the response was not proportionate to the crime, certain types of clothing and religious behavior became censored and China developed a digital enclosure system, which is used to track and monitor Uyghurs, essentially breaking the autonomy of the Uyghur internet. Additionally, the Chinese government sees certain behaviors as indicators of a dangerous person. These behaviors are synonymous with being Muslim: going to the mosque regularly, wearing a hijab and having a beard while under the age of 55.

Byler also discussed the construction of camps in China, called “training centers” or “reeducation centers,” where people are locked in cells, threatened with police carrying non-lethal weapons, kept under surveillance and transported in shackles. Byler compared these centers to “medium-level security prisons.” People in the camps are told to watch videos on the Chinese language/politics and sing patriotic songs to earn their meals but many reported not actually learning anything in the camp.

When asked about what he found to be the most disturbing aspect of the treatment of Uyghurs, Corey MacPherson, the advisor of the Muslim Students Association, said

“One of the most shocking aspects of the treatment of Uyghurs is the forced separation of families, which includes newborns being sent to orphanages.”

Byler later pointed out the broader effects on Uyghur society that has occured as a result of the Chinese government’s actions, including a rapid increase in kindergartens and boarding/residential schools that aim to raise Uyghur children in a non-Muslim environment. This process separates children from their parents for long periods of time and is comparable to the schools used for Native American children in U.S. history. There has also been a halting of Uyghur language publications in China in an attempt to reduce the use of Arabic script.

When asked what the biggest misconception about the situation of the Uyghurs was, Byler noted that those on the left who are suspicious of the United States and see this as an effort to get back at China, are just doing it for strategic purposes. Byler noted that his work is showing that what is happening in China is an echo of what has happened elsewhere in terms of Islamaphobia and racialization. He encouraged people in the west to push back against Islamaphobia and the war on terror, which can help end this “slow-moving genocide.”

When asked what he wishes Colgate students understood about the situation in China, MacPherson commented, “Educating ourselves of the injustices in our world is essential for everyone to know so that we might help, even in small ways, and so that we never allow such abuse of power to happen in our realms of influence.”