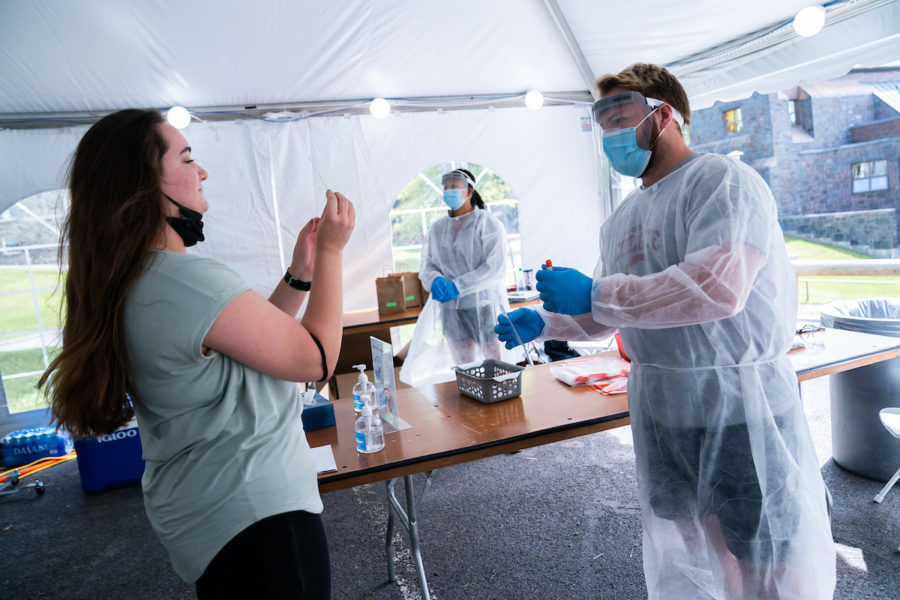 Despite being implemented quite recently, Gough stated that he has already noticed positive change coming from the implementation of the system.

“[The system was created] to make things easier for us,” Gough said. “We were managing [the scheduling] in-house through a Qualtrics survey, and that took a lot of staff hours to do each week. [The new testing system is now being used for] both the test site and for surveillance testing of any on-campus student and employee.”

The biggest  changes resulting from implementing the new testing system is the way in which the student body receives text, email and calendar alerts for the date and time of their scheduled tests, which aimed to mitigate issues that arose early in the semester of students missing required testing appointments.

“Our old system didn’t have a confirmation email, because it was done manually; this has an automated confirmation once you book your appointment and sends you a reminder for the surveillance testing that you’re due,” Gough said.

As a result, Gough said the compliance rates among the student body have increased.

“It’s a short window of time, it’s only been a week and a half I think, but compliance for testing has gone up and I think it is due to [that] confirmation email and the reminder that you have an appointment,” Gough said. “That’s really made a difference.”

Students and faculty expressed mixed feelings about the impacts of the new alert system. Junior Julia Birdsall, who works at Colgate’s testing center at 113 Broad St., said that while she’s seen a negatice change in student attitude with the increased frequency of testing this semester, she hasn’t observed a significant difference in the on-campus testing process since the implementation of the new system.

“I have worked at the testing center since the beginning of last semester when it was at the football stadium until now at 113, and have definitely seen some changes, especially in students attitudes towards testing,” Birdsall said. “With the new biweekly testing schedule the school has implemented this semester, I have heard a lot more complaints from students about the inconvenience of getting tested and the harsh repercussions if you miss a test.

However, other students spoke positively of the changes made regarding their testing schedules on campus. Junior Rose Corcoran has found the automated testing reminders helpful.

“Having automatic reminders for my appointment is really helpful,” Corcoran said. “This semester is so chaotic, so something as quick as routine testing could easily slip my mind without this reminder.”

She added that she believes the changes made to the system have helped across the student body.

“I think since the beginning of the semester when there were issues with communication and people missing appointments, there has been a significant improvement in holding students accountable to the testing schedule after they began sending reminders,” Corcoran said.

Junior Katherine Watt added that the testing process is more “seamless” with the University’s implementation of email reminders.

“I always tend to forget when my appointment time is especially when I have so many other things going on, but the email telling me when [my test] is is really helpful for me,” Watt said. “Not only does it help me remember when I need to go, but helps me organize my own schedule around my appointment time.”