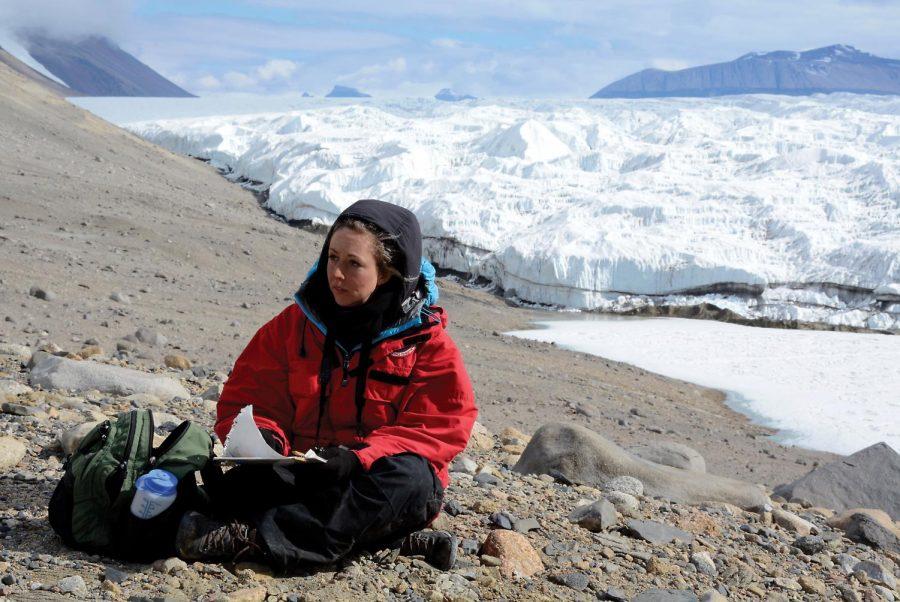 Artist Lily Simonson (pictured above in Antarctica) travels around the world for her art projects, many of which feature themes of nature and climate change.

Outside Room 243 of the Robert H. N. Ho Science Center hangs an oil painting created by artist Lily Simonson titled “Between the Ice Sheets No. 3,” the newest addition to the building’s art-through-science collection. Assistant Professor of Geology Joseph Levy’s permafrost research comes to life through the work of Simonson. In 2012, Levy and Simonson traveled together to the site of a melting glacier, buried under a thin layer of sediment in the Garwood Valley of Antarctica. In recent years, intense solar radiation has heated the dry layers covering the ice, resulting in substantial deterioration of the glacier – the subject of the painting.

The melting of the Garwood Glacier signifies one of the first instances of melting ice in the Antarctic region, similar to current melting of the Arctic permafrost. Levy shared the importance of this transformation from a geologic standpoint.

“This part of Antarctica was super stable for the last 20 or 30 years. It was in a slow cooling trend locally, and all of a sudden, the heat just turned on. [The melting] is happening very quickly, but it is also part of a much longer multi-decade process,” Levy said. “We are going to lose a lot of these important landforms and ice deposits that are used to reconstruct the past.”

Through her artwork, Simonson has helped to increase the visibility of Levy’s research.

“Joe and I serendipitously found each other at an Antarctic conference in 2012. While I had previously focused on biological subjects, his geology research really captivated me. Once I began painting the subjects of his research, we realized that my paintings could serve as an access point for audiences who might not otherwise be exposed to Joe’s work,” Simonson said.

Working in tandem with the National Science Foundation’s expedition, Simonson captured the rapidly changing glacial landscape through her artwork. She uses ultraviolet-illuminated paints to evoke this transformation by focusing on the beauty and destructive abilities of light and heat. Simonson displayed multiple paintings from this trip in a 2014 exhibit titled, “On Ice,” at the Los Angeles CB1 Gallery.

Through her artwork, Simonson preserved aspects of the Garwood Valley that no longer exist today. The Garwood Valley Glacier is about 10 km long and 3 km wide. The team consisted of six individuals, the only people working in a 50-60 mile area. That summer, there were around 5,000 cubic meters of ice  and snow melt.

Levy reflected on his experience working with an artist while conducting research of his own.

“Lily worked closely with my field team, so she visited all the climate change hot spots we were working in. That means that she’s painted sites that no longer exist – places where ten thousand years of glacier history has been turned into mud in the space of an afternoon or a summer,” Levy said. “When the field team got to a site, we’d all pull out notebooks and start describing or measuring the landscape, but each in different ways. Comparing notes at the end of the day, each of us – scientist or artist – spotted many of the same things, but were drawn to them for different reasons; one for their beauty or distinctiveness, and the other for the clues they offer about how the glacial history of the site evolved and how it is now melting away.”

As a geology major, junior Mark LaPan sees a benefit in looking at geology from a different perspective.

“Using art as a medium can help geologists understand geological formations in a new way. For example, it helps us represent 3-dimensional objects in a 2-dimensional medium,” LaPan said.

Simonson’s passion lies in traveling to remote ecosystems to explore nature and paint directly from life. Simonson has traveled to Antarctica twice and several other locations for her work.

“I have also been on several oceanographic expeditions in the past few years – to the hydrothermal vents of the East Pacific Rise, a submarine volcano in the Caribbean, and to chemosynthetic cold seeps near Costa Rica (which included me diving to 1,000 meters in the human operated sub, Alvin),” Simonson said.

With experience, Simonson has adapted her  painting methodology.

“I used oil paint almost exclusively for many years, but have found that acrylic paint, which dries faster and is less toxic, is much more conducive to working in the field and on ships. So I mostly paint with acrylic now,” she said.

Simonson donated her painting to Colgate as a means of further connecting students to remote ecosystems that they may not have access to.

“Art and science have a long history of overlap, from Da Vinci to Audubon, and I am interested in contributing to that lineage. I think that a dialogue between the two fields is especially important in a world that is undergoing extraordinary human-induced shifts,” she said. “I try to capture what it feels like to be in these places, and to spark a dialogue about what scientists, like Joe, are learning. I think college students especially might find evidence that interdisciplinary collaborations are not only possible, but valuable. And that no matter what your background is, science and art can be accessible,” she said.

“Scientific research and art both share the same foundational process. The artist looks to previous artists for influence, while the scientist looks to previous research. Then they form their own ideas and styles. Both art and science require the combination of previous work with a good dose of creativity,” Kidd said.

This year marks the first-year of Levy’s teaching position at Colgate. Levy believes that the addition of this painting to the Ho will encourage intertextuality between painting and scholarship.

“Whether it’s looking at the Canary Project prints in the atrium, or feeling the heft of the infinity sculpture across the way, or being totally immersed in an alien world up in the Vis Lab, there’s always some new way to experience science here at Colgate. My hope is that by hanging the painting right outside the sediments and surface processes classroom, we might spark some new questions – Why is all this ice here? Where did it come from? What is happening to it? Why does it matter for people in Hamilton, NY? – and that folks might come into the classroom to explore the answers to these questions,” Levy said.

Simonson’s artwork can be found on her website, lilysimonson.com.