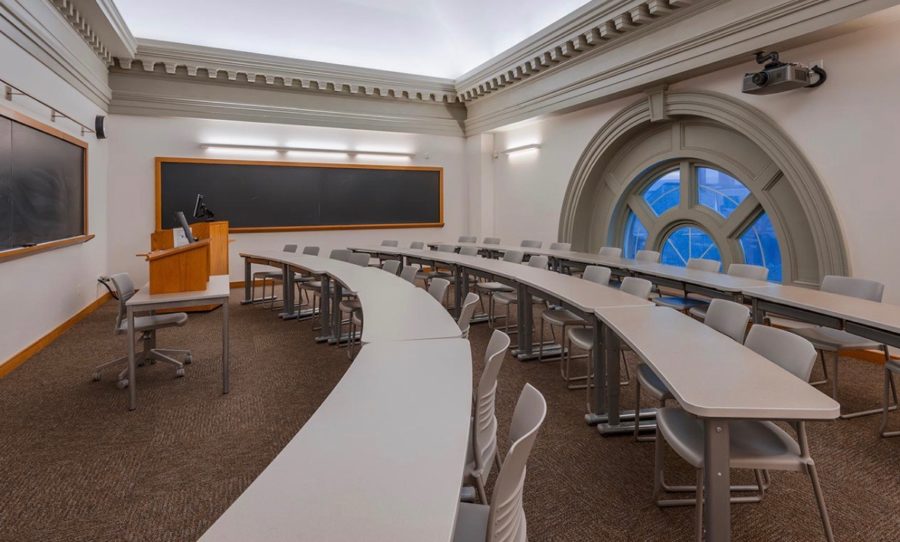 After months of deliberation among faculty members, the Core Revision Committee (CRC) fell short by four votes to confirm changes to the Core curriculum. Possible revisions included a new course requirement addressing social inequity, climate change, or both. Feelings of confusion and frustration have led the Dean’s Advisory Council, in consultation with the University Professors, to take over the revision process. The new proposal will be presented no later than June 1, 2021, with faculty re-voting on the Core revision in the Fall.

Composed of the Director of the Division of University Studies Padma Kaimal, four elected faculty members and five appointed professors, the CRC began the consultation and planning process in 2018 by studying Core Revision documents, holding faculty-wide conversations and hosting student groups before drafting their revisions.

According to the Colgate University website, the Core curriculum is a required course load that “develops fundamental skills and habits of mind that are essential for success in college and beyond,” which currently consists of Legacies of the Ancient World, Challenges of Modernity, one course in Communities and Identities, one course in Scientific Perspectives on the World and one course in Global Engagements. Since the Core Curriculum’s beginning in the 1930s, the University has assessed and revised the Core every ten years.

Kaimal first assumed the role of Chair in July 2020 after inheriting the work of previous CRC Chair Nancy Ries. According to Kaimal, the Committee substantially altered the proposed revision document after receiving feedback from retreats and department meetings. In faculty meetings, staff can discuss revisions, ask questions and vote on amendments. In most recent discussions, faculty debated adding a third clause to a newly proposed course requirement called Current Crises: Social Inequity and Climate Change. The course tag was included after numerous faculty members expressed interest in its addition. Several students, such as junior Christine King, have similarly called for classes that address contemporary issues.

“While [Legacies of the Ancient World] and [Challenges of Modernity] have allowed students to engage with materials that have been socially impactful in their respective era and have also proven to be applicable to many contemporary themes such as race, class, gender, etc., the materials themselves are pretty dated. The professors make a great effort to make connections between the materials and modern times, but most of those connections are either superficial or a reach, which in a way makes critical thinking on current issues a bit retrospective,” King said. “ I think there would be greater value in [using recent sources] than looking at materials from the mid-20th century to understand current issues.”

Although Current Crises: Social Inequity and Climate Change would not become a specific course, such as Legacies of the Ancient World, students would be able to fulfill the Current Crises requirement through courses that already address social inequity, climate change or both in a significant capacity. The controversial amendment proposed adding “Threat to Democracy” or “Disinformation” to the course description. However, the addition was voted down by faculty who felt the third item might distract from social inequity and climate change.

“[Current Crises: Social Inequity and Climate Change] had not been in the July draft, so there was a lot of conversation about it and a lot of questions about it. We had done some quick calculations about whether there were enough courses for it since it wouldn’t be a particular course,” Kaimal said. “People felt different ways about it; some people really wanted [Threat to Democracy, or Disinformation] added, but the side that prevailed still feels that Social Inequity and Climate Change are so important that they don’t want anything else to take away from that. There was questioning after the vote, whether maybe if we changed that, it would have gotten us the four more votes that we needed.”

Sophomore Lucy Khaner agreed with King, expressing excitement over the possibility of a new Core requirement.

“I think the course would be a great addition to what’s already required. I’d love to see even more ties to current issues. The majority of the books I read in class were historical instead of modern, and I think we focused on analyzing the meaning of the texts instead of the implications they had on the real world,” Khaner said.

According to Kaimal, the CRC proposed a margin of 67 percent approval for the revision process to move forward. The CRC did so with the hopes of building community among faculty. Chair of the Faculty Affairs Committee Alan Cooper said he admired the decision, which would enable the CRC to create a program that excited the most faculty possible.

“I thought the two-thirds majority threshold was the absolute right decision by [the CRC]. I thought that was a really generous and correct thing for them to do. We need to build a broad consensus around this. The Core cannot function if it’s only got half the faculty prepared to work with it,” Cooper said.

“That 35 percent could not be less homogenous, and they come from all sorts of different points of view. Some of the people have what I can only call ideological objections to the Core that they don’t like. Other people have questions about the curricular design, how it’s put together and how it’s going to work for all of us over the next few years in terms of advising students,” Cooper said. “So those are very different kinds of objection to the proposal, but you can only vote yes or no.”

Kaimal echoed similar sentiments, explaining that little consensus exists among those opposed to the proposal, which she considers to be a “complex” and “carefully balanced” document. While some amendments were agreed upon, others sparked debate and opposition among faculty members.

“To tweak any one thing threatened to put a lot of other things out of balance. And every piece also represented a kind of balance among many constituencies across the institution that don’t agree with each other. So every time they tried to tweak something, it was my job to point out, ‘Okay, well, here’s what you’re throwing out of balance.’ And I think that’s why, ultimately, the most substantive amendments did not pass,” Kaimal said.

In an email to the faculty on Monday, March 29, President Brian Casey outlined the University’s next steps following the voting fallout, which fell short of approval by 1.2 percent. According to Casey, the Dean’s Advisory Council, in consultation with the University Professors and the Curriculum Committee, will continue to obtain the thoughts and recommendation of faculty through meetings with academic departments and programs. Similar to Kaimal, Casey hopes that the Core program can bring faculty together and build the community further. Following faculty discussion, the Core revision proposal and framework for faculty engagement is expected to be presented to Casey and the Faculty Affairs Committee no later than June 1, 2021.

“It is important that we continue our work now. This date aligns with an institutional effort to encourage faculty and staff to take a much-needed break after many months of intense work undertaken in trying circumstances,” Casey said. “June 1 can surely be considered a reasonable deadline as these faculty colleagues will not begin their work from a blank piece of paper. They will have these past several years of work, deliberation, surveys and discussion to draw on.”

The White Eagle Retreat for faculty, now taking place on Aug. 17 and 18, will allow for staff members to consider the revised Core proposal and discuss its framework. Voting among faculty will again occur in the fall.

“I have enormous trust and faith in President Brian Casey, who has been really supportive and calm and fair throughout the whole process. And so I’m relieved that he’s the person whose hands all of this is in right now,” Kaimal said.