Student Athletes Give Insight Into Sports Without Fans 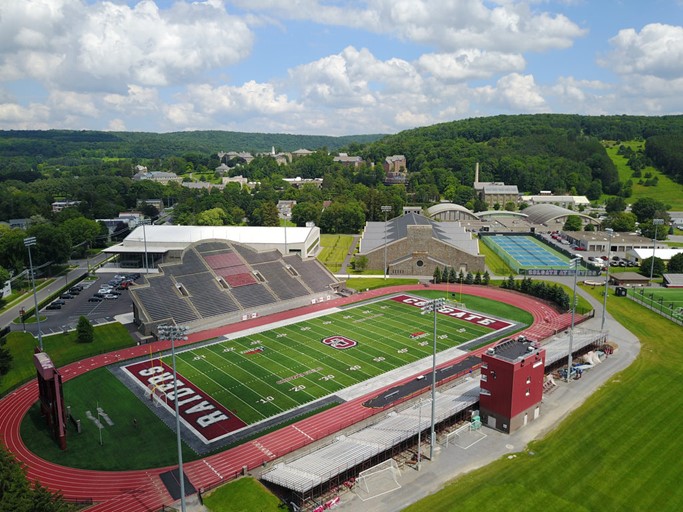 As Colgate’s Division I athletic teams have returned to competition this semester, all teams, regardless of if they are traditionally spring sports, have had opportunities to compete. However, the effects of COVID-19 provide a particular challenge for athletes this season: competing without fans. To understand how student-athletes have adapted to this new normal, the Maroon-News asked a series of questions to senior lacrosse midfielder Annelise Kotz (AK), senior soccer midfielder Mia Ciardiello (MC), junior hockey forward Jeff Stewart (JS) and senior lacrosse attack Mike Hawkins (MH) for their insight on playing without fans.

How has the lack of fans changed the game for you personally?

MC: It’s definitely been an adjustment without fans. I’ve taken for granted the moments when I would look to the crowd to see my biggest supporters. I feed off the positive energy around me, and the Women’s Soccer Team has amazing support from our community, so gameday doesn’t feel quite the same in Hamilton anymore.

AK: For me, not having fans means not seeing my friends and family at games, which was something I always looked forward to. Since it’s my senior year, it’s sad to think my parents may never be able to see me play again.

JS: I wouldn’t say it has changed too much for me personally. I definitely notice the lack of fans during the pregame warmups, but once the puck is dropped it’s game-time.

MH: It’s a great feeling having your family in the stands watching you play. Your parents are with you every step of the way, so having them watch you play in college is a special feeling. Not having my family has been tough because you want to share the experience with the people that helped you get to where you are.

What are some potential advantages of not having fans?

MC: Without fans, there are very few distractions. The potential rowdiness of a crowd is one of the uncontrollable aspects of the game we’ve been conditioned to ignore, especially at away games.

AK: I find myself more focused in the game and what’s happening on the field instead of looking for parents and friends in the stands.

JS: One advantage to not having fans is not having the emotion of the opposing fanbase. This could be the cheers they have, or the roar of the crowd when the opposing team scores. However, the experience of battling against your opponents, as well as the crowd, is a really cool experience and one I’d prefer to have.

MH: I wouldn’t say there are any huge advantages that come with not having fans. Sometimes having fans can add pressure to the games, especially in big moments, but that’s something most players enjoy.

What does the lack of fans take away from your sport?

MC: Not having fans takes away from the overall experience of being a college athlete. We play to represent our university, and sometimes it feels hard to do so when no one is there to cheer us on.

AK: I think not allowing fans has impacted the culture of our team. After games, we used to have tailgates with everyone’s families. Those tailgates built a tight-knit, supportive community where all the parents got to know the players and vice versa.

JS: The main thing lost is the atmosphere. Being able to see familiar faces such as the season ticket holders, or your friends and family, is always going to be something special and cannot be replicated by cardboard cutouts. There is nothing better than scoring a goal and hearing the roar and support of the crowd behind you.

MH: The atmosphere of the game is just different without fans. We’ve almost become used to it at this point in the season, but those first few times walking into a stadium felt more like a practice environment than that of a game.

Do you think your team has been more successful without fans?

MC: Pre-pandemic, our team absolutely loved rallying big crowds to our home games. We have always seen it as a way for us to get more involved with those around us while also promoting athletics. It has been really tough this year without that aspect of our program. There are many factors influencing success, and I think having our fans behind us is definitely one of them.

AK: I don’t think prohibiting fans has significantly affected our success. I think in the beginning, everyone was really sad there would be no fans allowed. But considering all the changes in 2020 and 2021, we just feel lucky to be able to play at all and compete in the Patriot League!

JS: Overall, I would say yes. Once the game starts all minds are focused on winning and competing. However, there is a certain buzz in the air when there is a large crowd in the building that gives everyone a sudden jolt of energy, especially when playing in front of our home fanbase.

MH: I wouldn’t attribute our successes or failures this year to fans. At the end of the day, it’s our team vs. the opponent, plain and simple. That being said, we really do have some of the best fans imaginable so having them back would be an awesome boost for morale.