A Historical Look at Wolves and Rabies 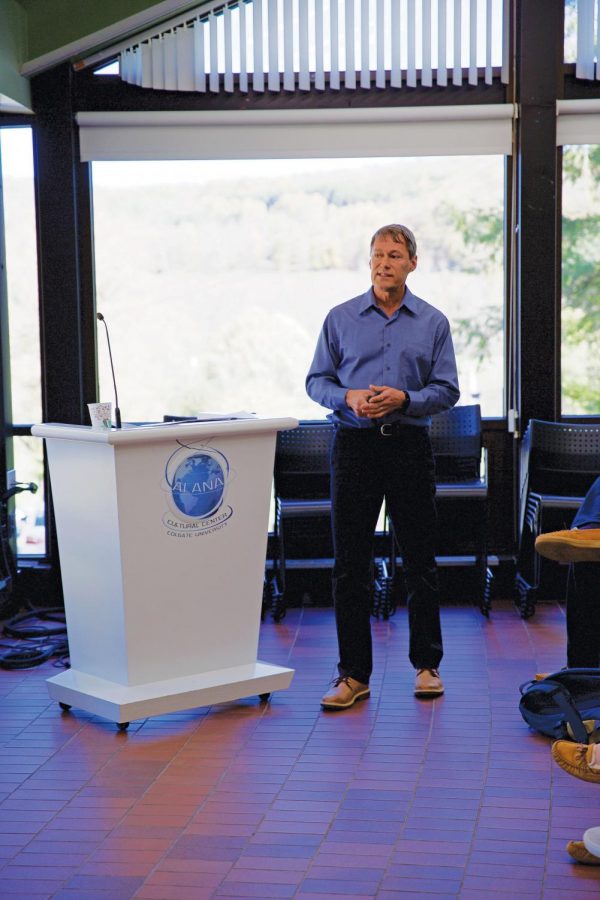 Helfant, pictured above, discusses rabies in his book, That Savage Gaze. Helfant visited Colgate on October 13 to speak on this topic.

On Friday, October 13, Associate Professor of Russian and Eurasian Studies and Environmental Studies Ian Helfant spoke on the historical and cultural importance of wolves and rabies in the Russian culture. This Brown Bag, held in the African, Latin American, Asian American and Native American (ALANA) Cultural Center, acted as a summary of Helfant’s first three chapters his book That Savage Gaze.

This upcoming release contains four primary sections, each focusing on a different aspect of the wolf in Russia’s culture and history. Helfant categorizes his book as both an ecocriticism, which studies the ways in which humanity views itself and its relationship with nature, and a human-animal study, which focuses on how humans have treated and portrayed animals throughout our history. As a whole, both studies are inherently interdisciplinary, congregating information from literature, artwork, journalism and the sciences.

The first chapter centers on the Russian practice of wolf hunting by the aristocracy. Helfant told the audience that the image of a man killing a wolf, either with a blade or even just biting with his teeth, is a strong symbol of masculinity within Russian society.

The second chapter covers the ways in which Russians combated the wolf population in their country. Hunting societies came to dominate the once-aristocratic wolf hunts, often promoting strict wolf control and the implementation of poison.

The fourth chapter focuses on the ways in which perspectives on wolves shifted within Russian culture. Humane societies established themselves against the common practice of wolf fights, where borzoi hunting hounds would attack a single wolf in arenas, similar to the Spanish tradition of bullfighting.

“It was difficult to justify the cruelty the wolves were subjected to in events like the borzois hunts, but the innate fear of wolves that was so ingrained in Russian culture provided an explanation as to why these events occurred,” Hogan said

However, the prime focus of Helfant’s presentation was the third chapter: “Chekhov’s ‘Hydrophobia,’ Kuzminskaya’s ‘The Rabid Wolf,’ and the Fear of Bestial Madness on the Eve of Pasteur’s Panacea. Helfant revealed that rabies, or in this case hydrophobia (named because many afflicted with the illness find themselves unable to swallow water), held as much of a place in Russian folklore as it did in medicine.

Helfant cited “A Horrific Event,” a 1862 newspaper article detailing an attack of a lone rabid wolf in a small Russian village, where the beast purportedly bit 63 peasants. This event provided insight into the politics behind the medical treatment available to rabies victims. There was great tension between the medical establishment, here embodied by Dr. Grabovsky and his arsenic-based rabies treatment, and “pagan” folk healers who utilized alternative methods of treatment, such as carving runes into bread.

The major issue with rabies treatments in 19th century Russia was that there was no reliable cure. Once a rabid wolf or dog bit a human, the victim held a 30 percent chance that they would contract rabies, and the time’s modern medicine was as much of a gamble as the folk healer’s spells.

Helfant referenced two pieces of literature surrounding rabid wolves: Anton Pavlovich Chekhov’s “Hydrophobia” and T. A. Kuzminskaya’s “The Rabid Wolf.” Both narratives describe a wolf attack and the way those involved dealt with the circumstances, but both in different ways. Chekhov’s story focuses on the paranoia surrounding the aftermath of the incident, where the main character struggles with the knowledge that he might have rabies, even if the symptoms do not show themselves. Kuzminskaya details the ways the main character had to deal with the medical establishment, who banished the main character and her son to a provincial madhouse.

Finally, the presentation shifted towards Louis Pasteur’s rabies vaccine. Louis Pasteur was a French scientist who developed a vaccine for rabies in the late 1800s. His most famous usage of his vaccine was with 18 rabies-infected peasants from Smolensk. These Russians were rushed to Paris, where Pasteur was presenting his findings to the scientific community. His vaccine worked wonders on the peasants, curing 15 of the 18 afflicted, and eventually led to the establishment of rabies centers across Russia.

In the end, Helfant’s presentation shined light on an aspect of history that not many students would find themselves studying. First-year Colton Boquist believed that Helfant took an in-depth view into a topic that is not often explored.

“Overall I thoroughly enjoyed it and look forward to his book,” Boquist said.