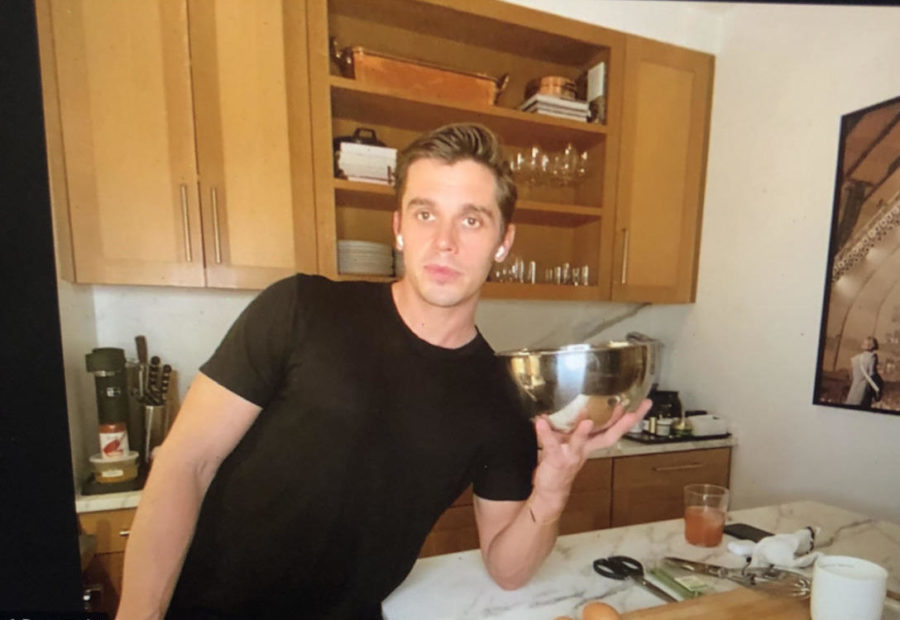 Among the five stars of “Queer Eye,” Porowski is renown for being a connoisseur of food and wine. The Polish-Canadian home cook is also a model, actor and author, with his book Antoni in the Kitchen appearing on the New York Times Best Seller list in 2019.

Zooming in from their respective kitchens, Junior Nathan Conlon hosted Porowski and followed along while the “Queer Eye” star demonstrated how to make eggs in both a soft scramble and omelette form.

“Eggs have been my obsession during quarantine. I’ve had a lot of extra time on my hands, especially sitting at home. I wanted to really perfect from the beginning how to make a perfect soft scramble because mine were always overcooked,” Porowski said. “With a soft scramble, they’re fully cooked through, but they’re still runny and creamy and you don’t have any gelatinous whites — everything is perfectly homogenized and mixed in together.”

After following Porowski’s instructions on how to cook the omelette and soft scramble, Conlon tasted his finished products, saying that he preferred the omelette. “I’m impressed,” Conlon remarked.

During the Q&A session, Porowski discussed the extent to which the COVID-19 pandemic has influenced his eating and cooking habits.

“I feel like I have the time to put more care into food… since [Queer Eye] started, I haven’t been able to have that focus,” Porowski said. “There’s more intention with the food I make, and that just gives me more of a sense of meaning and purpose.”

Porowski also expressed his solidarity for the hindrance college students who lack access to a kitchen face, giving advice as to how those with a penchant for cooking can still make healthy snacks in a dorm room setting.

“I wish I could tell you I had these awesome eating habits when I was in college, but honestly it was Subway and pizza four or five nights a week, just like survival mode procrastinating for exams,” Porowski said. “If there’s no heat to cook with or anything like that… I eat a lot of raw and marinated vegetables. For example, zucchinis or carrots that I like to make nice, dense vinaigrettes for… zucchini with olive oil, fresh garlic, and some pine nuts, and you let it sit in some lemon juice. It’s so good.”

As a student with a fondness for cooking, sophomore Serelle Carr, Co-President of the Spoon University team at Colgate, appreciated Porowski’s message about the reality of the situation many college student cooks are in.

“I thought that it was really important that he normalized not eating perfectly all the time in college, because it’s so different going from having full kitchen access at home to only being able to make food in a dorm room. I also thought that his note on raw produce was very good because that’s accessible and an easy snack,” Carr said.

During the Q&A session a student asked what advice Porowski would have for a younger LGBTQIA+ individual, prompting Porowski’s focus to shift from how to nourish oneself culinarily to tips on how to be mentally well-nourished too. Drawing upon his own experience with mental health, he ultimately urged students to take advantage of available resources.

“Whatever it is that you have going on, if you identify as under the umbrella of LGBTQIA+, or if you’re questioning, to have those questions alone in your head, that was when I felt the most lonely. What really shifted for me was when I started being more aware of my mental health and started seeing a therapist,” Porowski said. “I’m sure you guys have resources you can tap into, whether it’s social workers, psychologists, psychiatrists, and if for whatever reason that makes you uncomfortable, find a friend who’s non-judgmental.”

Porowski emphasized the importance of finding those in our lives whom we feel safe and comfortable talking to. “Mentorship is something that has really helped me, not only as a member of the LGBTQIA+ population, but just as a person.”

By the end of the virtual visit, it was clear that Porowski managed to not only leave the community with tips on food to eat, but also with food for thought.