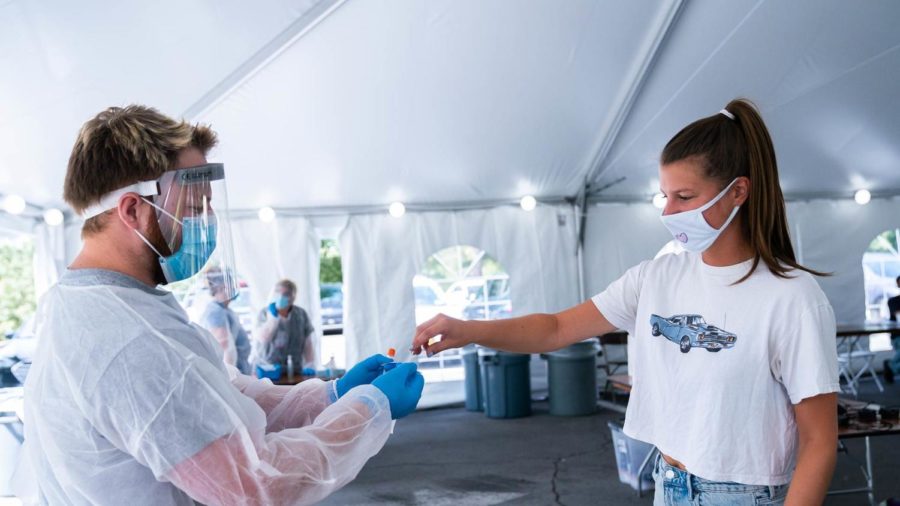 The coronavirus pandemic has fundamentally changed the protocols and processes for functions across campus and sports are no exception. Student-athletes have had to receive continuous testing in order to compete against nearby schools.

Most athletes get tested three times a week, on Monday, Wednesday and Friday, and feel as though the process is fairly quick and effective. Sophomore Katerina Atallah-Yunes, who plays for the Women’s Tennis team, shared her feelings about the testing.

“At first, the idea of getting tested three times a week seemed excessive. However, as we started to travel and compete against other schools that have a lot more cases than Colgate, it’s comforting to get results after matches,” she said.

She said the system is effective, especially considering other schools are held to the same standards.

“The tests are all rapid tests so you get a result within 15 minutes of taking the test. In addition, any school that we are competing against has to do the same exact testing policy and confirm that they are all negative to compete,” Atallah-Yunes said.

From the Men’s Track and Field team, junior Johna Joseph also shared similar sentiments about testing and feels as though it is simply part of the “new normal.”

“My sprints squad is focused on having the opportunity to compete at all. It isn’t something we really talk about, it has just become part of our new normal for competition. The same way that an athlete signs eligibility forms, we treat getting a negative test the same. It’s just part of the process,” he said.

Sophomore Eli Gould, who plays for the Men’s Soccer team, feels extremely grateful for the opportunity to play this year as his season in the fall was originally canceled because of the pandemic.

“I was not sure if we would be allowed to play against other schools, but Colgate has… given student-athletes the chance to compete. We have had to be a lot more cognizant of the rules this term, but I am just happy we are able to play,” Gould said.

Atallah-Yunes, who had an experience with a false positive, explained the steps taken in the event of a positive result.

“If an athlete or coach tests positive, they are immediately notified and have to return to Reid to get tested again. The second test is a PCR test to confirm the positive result. It takes one to two hours to get the result. During that time, the athlete self-quarantines. Fortunately, mine was a false positive,” she said. “If a coach or athlete tests positive, the protocol is more on a situational basis. It depends on how big the team is, if they traveled on a bus with other teammates recently, etc.”

All three athletes agreed that COVID-19 has significantly impacted their sports season.

“The virus has required us to push our body beyond the scope of what we thought was capable. It has shortened the length of time that we can stay at meets, our ability to stay at hotels and the types of bonding events that we would normally have. I feel that I’m lucky because our sprinters have found a way to become really close this year but I know it can be difficult,” Joseph said. “Because we can’t stay overnight at hotels, we have found ourselves waking up at 4:30 am for races we don’t have until 3 p.m. in the afternoon. Because of the shortened track meet schedule, our bodies have less time to recover, less opportunities to be at our best. [COVID-19] has tested our conviction and commitment, but I love what I do.”

Atallah-Yunes said COVID-19 has reduced the number of matches her team can play.

“In a normal season, we play two matches a weekend. With Colgate’s testing policy, we are no longer allowed to play two schools in one weekend for contact tracing purposes. Our schedule this year only includes eight matches before the Patriot League tournament, while a normal schedule would be closer to 20 matches. We also cannot stay overnight, so all of our away matches have to be within a four to five-hour drive,” Atallah-Yunes said.

“[The team has] had to stay extremely flexible to game times and locations. The coronavirus has made this hard to pin down, so athletes have to keep a positive attitude and be grateful whenever we are able to participate,” Gould said.

However, Gould emphasized the role of administration in making it possible to compete at all.

“We have been able to travel off-campus to events which is extremely nice since it allows us to expand our schedule. For soccer, we are able to have a Patriot League tournament, which is being made possible by the Commitment to Community Health,” he said.

Despite the new challenges, Joseph explained that he sees the bigger picture, and sees his role within the larger pandemic.

“This is bigger than us. Bigger than sports, education, vacations or vocation. I think we just have to be adaptable and learn to bend before break. We can all make it through this for the better, and I’m not just talking about our Colgate bubble,” he said. “We are small, the world is huge. Be kind to each other.”