Colgate Provides Updates on Class of 2020 and 2021 Commencement 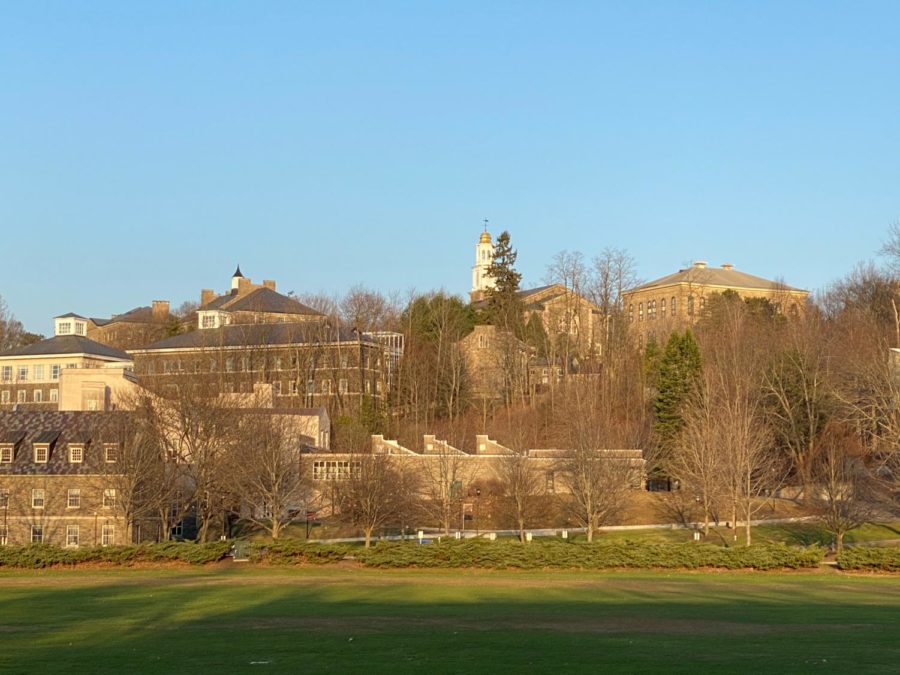 In a March 15 video message to the community, President Brian Casey announced that a final decision regarding the guest policy for Commencement for the Class of 2021 could not yet be made. Casey said a decision on how many guests, if any at all, can attend the 2021 Commencement will be announced on April 19.

“We realize that uncertainty is difficult, but we believe that watching developments will afford the chance for the best possible celebration for our graduates,” Casey said.

Seniors have been asked to provide two names for potential guests they would like to bring to the ceremony if guests are permitted, noting one prioritized guest should only one be permitted, according to an email sent to students from Vice President for Communications Laura Jack on April 2.

The University has been following New York State commencement guidelines in planning the ceremony with the potential of a no-guest policy, according to Chief of Staff Hanna Rodriguez-Farrar.

“We pushed the decision regarding guest policy to a later date with hopes that the State will change regulations, which are updated frequently… We have been working with the New York Six and the Commission on Independent Colleges and Universities for new guidance from the Governor’s office,” Rodriguez-Farrar said. “The current commencement guidance is from June 2020, and the situation is significantly different now compared to last year.”

Class of 2021 President and senior Natalia Valente is involved in providing both ideas and assistance to Rodriguez-Farrar and the rest of the Commencement Executive Committee (CEC).

“Because we don’t yet have an answer for guests, we’re planning the ceremony both with and without guests,” Valente said. “The potential for guests has always been a goal for Colgate… I think as New York State has opened up its guidelines it has become a bit more plausible.”

The possibility of a fully virtual graduation ceremony has been included in the planning process as well, according to Rodriguez-Farrar.

“The CEC has been focused on how to execute an event in Andy Kerr Stadium that will comply with health and safety protocols dictated by New York State and Colgate policies,” Rodriguez-Farrar said. “With hopes that we can have guests, we are developing a plan that would have two guests per graduate, as well as a plan that is entirely digital/virtual if we cannot hold an in-person event.”

Senior Nik Rajavasireddy expressed concern that a no-guest policy for the 2021 Commencement ceremony might not be sufficient to prevent people from coming to the Hamilton area to celebrate. Rajavasireddy suggested that a structured guest screening policy in terms of COVID-19 testing and vaccination records would be safer for the community.

“The potential guests would have to give a vaccination report if they do end up having guests,” Rajavasireddy said. “I think that’s a better situation because people are going to come regardless, so [we] might as well just make sure they are tested before coming.”

Senior Madison Mixer shared appreciation for the efforts made by the Colgate administration to communicate with students and reach the best possible outcome for graduation.

“If they don’t allow guests, I’m sure it’s for safety reasons… I completely support the administration and task force prioritizing the safety of the students and families,” Mixer said. “I obviously wish we had known all along what the plans were but, again, that’s impossible… I appreciate that they are pushing off decisions until the last minute to give the best chance that there might be guests.”

The CEC will continue to update seniors and their registered guests on changes in New York State gathering guidelines.

President Brian Casey announced on March 17 that the commencement ceremony for the Class of 2020 will take place on May 28 and 29, 2022, now about two years after it was initially scheduled to occur. According to Casey, gathering guidelines in New York State would still impose restrictions for the ceremony if held in 2021.

After the original graduation ceremony plans for May of 2020 were canceled in accordance with New York State COVID-19 guidelines, an in-person commencement for the Class of 2020 was initially postponed to the Spring of 2021. However, Casey acknowledged that New York State gathering guidelines still do not allow for the Class of 2020 to have a graduation ceremony without restrictions this May.

“We certainly believe that next summer presents a far greater chance to have the type of event with the number of guests you would want, here in Hamilton,” Casey said in a video emailed to the student body on March 17.

The administration has made efforts to open lines of communication and accept input from the Class of 2020, according to Chief of Staff Hanna Rodriguez-Farrar.

“At the end of February, I met with a few Class of 2020 leaders to talk to them about their commencement and the current situation for their classmates. I asked them to reach out to their friends and get their input. It was pretty clear that they preferred a commencement weekend that didn’t require all the rules and regulations that currently guide everything that we do,” Rodriguez-Farrar said. “They hoped for a weekend that would be more ‘normal.’ We plan to continue to engage with more members of the class in the fall.”

Student Government Association (SGA) co-President for 2019-2020 Christian Johns ’20 has worked with Rodriguez-Farrar to organize potential dates and events for the ceremony. Johns also mentioned a future town hall to be held for the Class of 2020 to discuss plans for the ceremony, suggested by himself and Class of 2020 Senior Honor Society Co-Presidents Kiana Billot-Vasquez and David Little.

“[The] Administration really does take an approach to include the Class of 2020 in the planning, but it’s been hard with everybody spread out,” Johns said. “We suggested having a town hall to discuss what we want the weekend to be like, just so that it’s fair to the other students and so that they have an idea of what we were looking for come next year.”

Rachel Dansereau ’20 said she understood and supported the decision to move commencement from this spring to next.

“It’s sad that [COVID-19] has forced us to move our graduation so many times… But it makes sense,” Dansereau said. “I am happy that the University has been taking the pandemic seriously and considering everyone’s safety first.”

Dansereau expressed high hopes for potential attendance at the May 2022 ceremony despite graduates being off-campus.

“I think the advance notice will help. People will be able to clear their schedules or at least have the date in the back of their mind,” Dansereau said. “People may not have as much access to get back to campus as they did previously. However, I think our class was obviously upset about how our senior year ended so abruptly. I think everyone will be excited to return and be together to celebrate what we missed out on.”