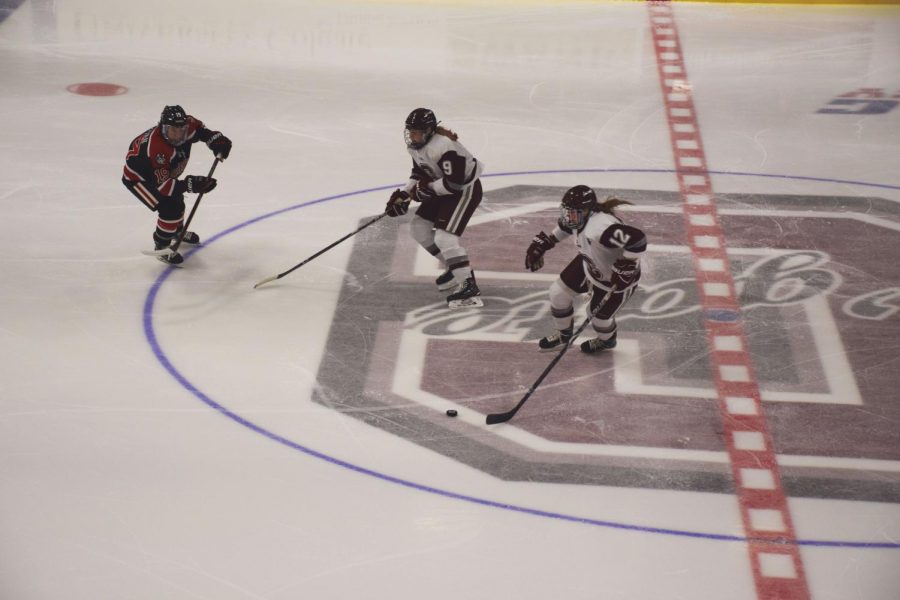 The Colgate women’s hockey team starts off its 2017-2018 season in theme with its exceptional, winning performances of years past as they sweep this weekend 2-0.

The Colgate women’s hockey team was very successful this weekend against the Northeastern Huskies. The Raiders were able to dominate Northeastern with two separate wins against them. On Saturday, October 14, they beat their opponents out 3-0. The next day, they faced the Huskies again, and even though Northeastern was ready to come back with a vengeance from their previous loss, the Raiders were still able to overcome the visiting Huskies and snag a 5-2 win.

At the team’s first game on Saturday, junior forward Jesse Eldridge put up two goals, while junior forward Shae Labbe also scored a goal. What really amped up the Raiders, and how they were able to get a lead early on in this game was with the hustle of senior forward Shelby Perry, she was able to start the team off with a goal on a power play started by first-year forward Malia Schneider. This set the tone for the rest of the game, enabling the Raiders to keep scoring, while preventing the Huskies from ever getting on the board. The Colgate Maroon-News talked to senior forward Megan Sullivan about how the team is shaping up this year.

Maroon-News: How are the first-years? Have they acclimated yet? Do they look promising?

Megan Sullivan: The first-years are awesome! They’ve definitely acclimated during preseason and are feeling more comfortable after having a few games under our belt. We have a really hardworking group with a tremendous amount of talent, and it’s been really exciting watching everyone come together.Sullivan makes no exaggeration when she comments on how well the first-years are doing this year. In the team’s second game against Northeastern, Schneider scored a goal for the Raiders.

After a successful weekend, the women’s ice hockey team must stay focused as they prepare for their upcoming battles. On October 20 and 21, the Raiders will be playing Mercyhurst University. Perry talked about how she and many others on the team are going to prepare for these games, especially on game day itself.

MN: What is your team’s pregame ritual? How do you mentally prepare on game day?

Shelby Perry: For a 6 p.m. puck drop, game day looks a little different. I try to sleep in and get a good breakfast before heading to the rink for pre-game skate. Normally our pre-game skates are no longer than 25 minutes and it’s just nice to get out there and feel the puck and get a little sweat in. Following that, I’ll just relax and watch Netflix and eat a pre-game meal about four hours before puck drop. When I get to the rink, the fun starts. I tape my stick while listening to music, play some soccer with the girls, warm up with the team and then play volleyball with the CWIH “volleyball team.” That’s probably my favorite part of pre-game rituals. After volleyball, I get dressed and ready for the game!

Perry and the rest of her teammates have a lot to look forward to as they plan to continue their five game undefeated winning streak in the coming weeks that will provide a lot of competition from tough teams.