Nizhoni Saenz – Activist with a Message 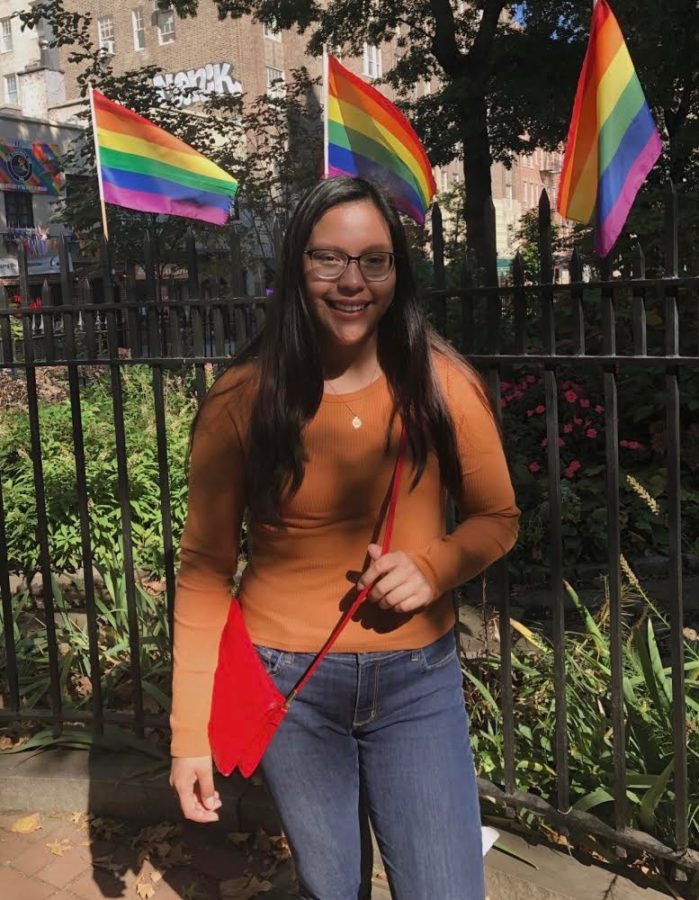 Walking around town, support for the LGBTQ+ community is more widely shown now than ever, with pride flags hanging on the front of houses or in the windows of apartments. The bright colors are a warm and welcome sight, both because they show the support students have for one another and brighten the sunless days as we leave winter behind. The flags are indicative of increasing awareness of social justice issues in recent years, especially with regard to ethnicity, sexuality and religion. Nizhoni Saenz is at the forefront of social justice at Colgate, promoting equality for her peers through her many involvements on campus and her impressive activism.

Saenz, a senior from Tempe, AZ concentrating in sociology and minoring in psychology, is actively involved in social justice and activism on and off of the Colgate campus. One of her major accomplishments on campus has been acting as a co-president of Queer and Trans People of Color (QTPOC), a group that celebrates a variety of ethnicities and sexualities. As co-President of QTPOC, Saenz is in charge of planning weekly meetings about various topics on queerness, empowerment, identity and self-care, collaborating with other student clubs on campus.

“The goal of QTPOC is to provide a confidential and supportive network for students of color who identify as LGBTQIA+ on Colgate’s campus, while also celebrating the complex intersections of race, ethnicity, gender and sexuality,” Saenz explained.

QTPOC is largely involved in education on campus through the development of programs and events on campus to raise awareness about the specific social issues that QTPOC students face. The events the group has organized include the Queer Sex Education and Consent workshop series, which have all helped to increase exposure across campus. Other events include movie nights, art nights and general meetings where conversations about queerness are conducted.

“Just by meeting weekly to have a queer space with friends—it’s a lot of fun and I really enjoy it. Although it is a lot of work, I’m happy to have QTPOC as a community,” Saenz said.

Through the help of her involvement with QTPOC, Saenz has found her home at Colgate. Saenz has worked to surround herself with people who allow and encourage her to celebrate all aspects of herself, including the Office of Undergraduate Studies (OUS) Scholars program.

“I have been able to find great people on campus who make me feel accepted, empowered and celebrated,” Saenz said.

By bonding with the other OUS students who have similar experiences to Saenz, she has been able to celebrate her background and queerness on campus. Saenz also uses her clothing and decorations to feel more herself in a predominantly white, cisgender, heterosexual space such as Colgate.

“When it comes to people celebrating their queerness on campus, I definitely think it’s been hard to establish community this semester due to [COVID-19] conditions. There are certain spaces that are so vital to the queer community at Colgate… and not having access to these spaces makes things a bit difficult,” Saenz said.

The activist wishes there were more queer spaces in general on campus and believes a LGBTQ/queer interest house would be advantageous to the students who are excluded from greek life houses due to gender identity.

“There has definitely been a lack in queer programming the past few years, and a lot of the stuff that happens is due to student action and student involvement,” Saenz explained.

More interaction with the Colgate administration would help to promote equality and comfort on campus, especially during the trying and changing times we face in the pandemic.

Beyond her involvement with QTPOC, Saenz is currently involved in the Colgate Senior Honor Society, the Medusa Movement, Sisters of the Round Table (SORT) and is the LGBTQ intern at Haven. In the past, Saenz has been a member of the Colgate Christian Fellowship (CCF) and Latin American Dance (LAD). Saenz also worked at the Colibrí Center for Human Rights as the Social Media and Communications Intern and has continued to volunteer with them as the Colgate Campus Student Ambassador.

Among her many accomplishments, Saenz was the recipient of the Lampert Language Fellowship in 2018, through which she was given the opportunity to travel to Yucatán, Mexico and study Spanish for the summer. Saenz also studied abroad in Cardiff, Wales, UK during the Spring of 2020 and was a part of the Sophomore Residential Seminar (SRS), through which she joined her class on a trip to Rome, Italy. Saenz was recently featured on the Colgate Unspoken Instagram page, outlining her familial lineage and history.

Outside of her Colgate club involvements, Saenz enjoys writing, playing basketball, creating art, music and hanging out with her friends. After graduation, Saenz plans to move back home to Arizona to take a gap year while studying for the GRE and search for graduate psychology programs.

“I’m just hoping I had a positive impact on the people here on campus, and the wider Colgate community. By building community with one another, we celebrate queerness, queer-life, and culture,” Saenz said.