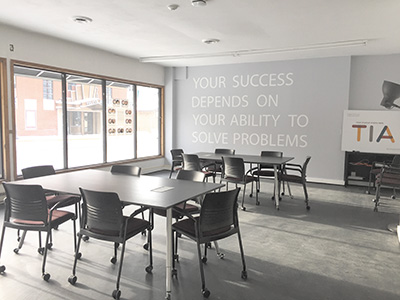 Over 90 students, staff, faculty and alumni attended the ninth annual Entrepreneur Weekend hosted by Thought Into Action (TIA), a program that promotes entrepreneurial activities among Colgate students and Hamilton community members. The event was held on Saturday, April 10 and Sunday, April 11 and began with an asynchronous Virtual Venture Showcase featuring all 42 current business ventures and culminated with a live virtual Shark Tank event.

“I was very excited to participate, because I love the way that TIA has organized both students and faculty and integrated into the school curriculum and the school culture, and then brings in former alumni and former founders and CEOs and companies to help mentor young entrepreneurs,” Fialkow said. “For founders to be able to recruit teams, get customers, raise money, or do anything, they have to learn how to tell their story in a very effective way. And there’s no better training than the type of program that Colgate is running.”

According to Director of TIA Carolyn Strobel, the program looked for individuals with experience as funders and founders across technology, film, health, education and retail industries. Strobel expressed excitement that Fialkow could attend after canceling the event over concerns regarding the coronavirus. Although planning for the live virtual Shark Tank began in January of 2021, TIA reached out to the four teams previously selected for the Entrepreneur Weekend of 2020.

“It was nice because we were able to give all of those teams the opportunity that we promised them and still include teams that were featured. I think that we have a really incredible group of ventures in the Incubator this year. When we look to next year, we’ll have a really great pool of ones to pull from, so it actually ended up working out perfectly,” Strobel said.

“First of all, it’s a great chance just to practice pitching and get to show your idea in front of a bunch of people. But also, the panel of Sharks was a really awesome panel, with people who are in the fields that I’m trying to get into and people who are very successful and have a lot of really important and valuable insight,” Nash said. “Anytime you do a pitch like this, you learn a lot more about your company, and the general market and doing practice Q&A and everything like that.”

After returning from their deliberation, the Sharks announced their decision. According to Mediratta, the panel considered how funding might benefit companies’ current business traction and self-sustainability in the long term.

“We were blown away by Natural Beauty. It’s such an area where you can make a huge improvement. I love your domain expertise in this area, your story, the traction you’ve had so far, and that this is such a worthwhile problem,” Mediratta said during the Shark Tank. “It’s just a really exciting thing to see somebody tackle and make a positive improvement in the world. And you know, all of us are really touched. We’ve all known people who’ve gone through this, and we know how hard it is. And we’re all rooting for you to make a huge, huge impact in the world.”

While only one pitch claimed the $5,000 prize, Dunne discussed her perceived value of the event outside of the cash prize.

“These are good friends who I’m working with and pitching against, so it’s kind of friendly competition. But I think the most exciting thing was the fact that I was surrounded by such incredible people. I didn’t really care about the money. It was more about the connection to the judges and the ability to pitch alongside people who I respect and admire,” Dunne said. “It provided an opportunity for me to put myself in a more uncomfortable situation to present in front of everyone. So that’s awesome for personal growth, it gave me professional connections, and it just overall made me also practice my life, you know, to have to give a two-minute pitch on a business.”