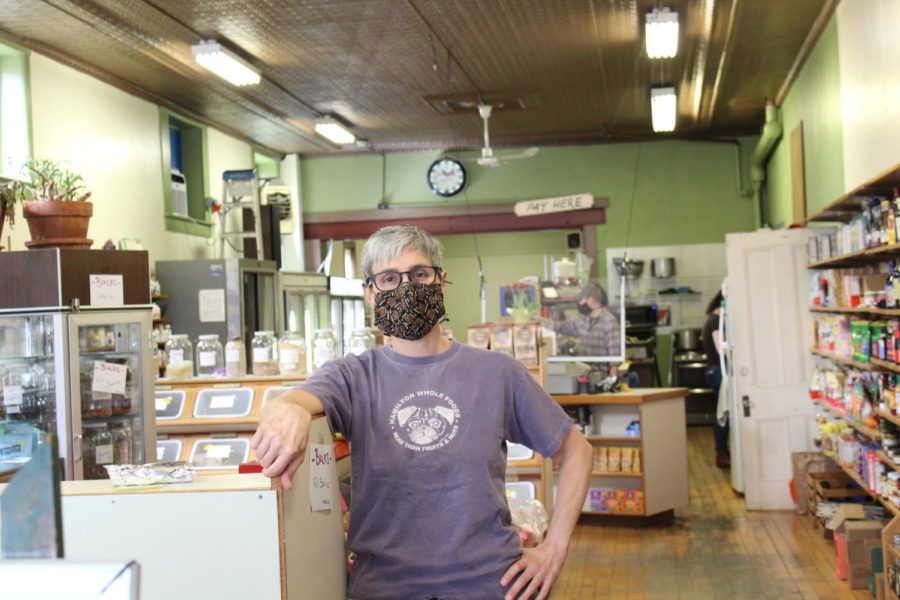 Hamilton Whole Foods is celebrating its 30th anniversary this month, marking three decades since the establishment opened in April 1991. Co-owners Monica Costa and Heather Dockstader released a T-shirt to commemorate the store’s anniversary. In-person gathering at the store is restricted due to the pandemic, but Costa and Dockstader said they have a surprise organized later this month to celebrate.

In 1991, Hamilton Whole Foods was one of the first vegetarian delis to open in Central N.Y. Dockstader explained how the business has grown and changed over the years.

“The business has evolved depending upon the needs of the town. We used to do clothing, bookstore, coffee shop, pet food retailer, and as those things change, we change. The core of the business has remained the same. There’s always been a focus on local, sustainability, natural, good ingredients, and also good people,” Dockstader said.

Costa added that Hamilton Whole Foods is a staple of the Hamilton community and that the business has, in turn, been shaped by it.

“The business is created by the community,” Costa said. “I was only a small part of running the store and making it happen. It’s always been a ‘we’ place and I am completely humbled by all the lives that have crossed my path and touched my life. To reference Sesame Street, I’ve loved being a person in the neighborhood.”

“It’s my favorite thing to do at Colgate. It’s this little safe haven bubble where I can work with people who aren’t affiliated with Colgate, meet townspeople and listen to good music which is really fun,” Thomas said.

Taiward Wider grew up in Hamilton N.Y. and worked at Hamilton Whole Foods beginning in 2013.

“It was a cornerstone of my high school years… It was just a really wonderful place to hang out and we got to know everybody there,” Wider said. “It was a really good environment because it was good to work with other queer folks who are out, and that was really important to me as Hamilton is a pretty small town and I didn’t really have much community there as a transgender and queer person myself.”

Alumnus Nick Grunden ’15 worked for Hamilton Whole Foods from the Fall semester of his sophomore year until he graduated, making his work experience integral to his Colgate experience at large.

“[Hamilton Whole Foods] had always attracted my attention from when I toured Colgate because when I went into Hamilton they had that rainbow flag outside. As a gay student that was something that stood out to me. Then, as I went in there a couple times and started working there, openness and hospitality was constantly in that space,” Grunden said. “It was like a home away from home for me.”

Despite now living in Spain, Grunden still remains in contact with Costa.

“I feel like I’m just one of many, but I feel like it’s a real testament to how many former students when I was working there would stop in and say hello, and I still to this day call Monica to just talk about life because that’s what would happen behind the counter when we were working,” Grunden said.

Alumna Elizabeth Navisky ’96 began working at Hamilton Whole Foods in her sophomore year and has also remained in touch with store owners after graduating.

“It was a very important place to me then and it’s still an important place. It’s so special a small business like this has thrived for this long, and I think it’s added so much to the community of Hamilton and to Colgate. I think they were ahead of their time,” Navisky said. “ When you think about it, 30 years ago to start a vegetarian deli in central N.Y. was a bold move, and I think it ended up filling a need. I think they’ve just added so much to so many people’s lives.”