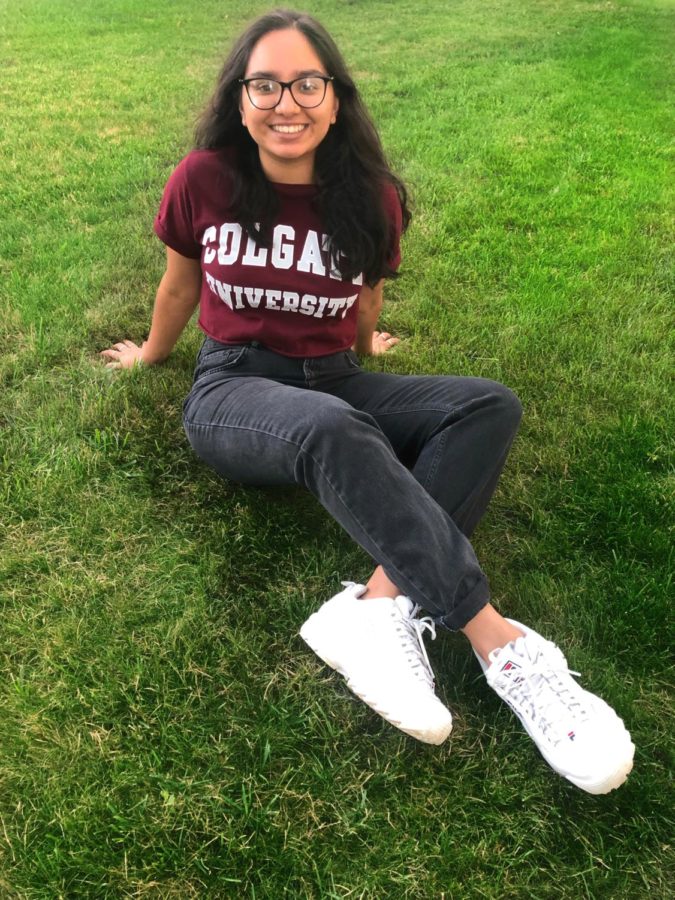 Social justice is not for the faint of heart. Senior Harleen Kaur, a political science concentrator and religion & film and media studies double minor, has dedicated her Colgate career to activism. Hailing originally from Queens, N.Y. and now residing in Buffalo, N.Y., she understands the difficulty of navigating different cultural spheres.

“Queens had a strong South Asian community,” she shared. “I miss the community … [I miss] people being similar to me in a way that’s unspoken.”

Coming to Colgate, a predominantly white institution, she sought to find groups on campus that were emblematic of that unspoken community. She is the South Asian Cultural Club’s Senior Advisor and is a member of the Sisters of the Round Table. She consistently participates in ALANA cultural events, which remains her favorite spot on campus, and has surrounded herself with fellow activists.

Her constant drive towards furthering social justice in her various communities has allowed her to create profound change. She is proudest of her senior year, especially being part of the inception of the Colgate Student Coalition (CSC) and its fundraiser that raised over $74,000 for bail funds in the wake of the deaths of Breonna Taylor, George Floyd and Ahmaud Arbery.

“Seeing people so driven was so great in a moment when I felt so depleted, not only because of the pandemic and… watching the news 24/7 to see what’s going on, but also just feeling alone in my space at home where I felt I couldn’t do anything. Then I found this virtual space with people who were really driven and motivated to provoke change… and they actually did.”

Though she remains humble in her achievements, Kaur also acts as current co-president of the Senior Honor Society (SHS), a group that strives for a more equitable and inclusive campus. Amongst her many initiatives is the 13 Days of Education, a collaborative effort between CSC and SHS that occurred at the beginning of this year. For her, these events served as the catalyst for the long-term undertaking of the society’s name change, an action that speaks to the legacy of anti-racism that she hopes to leave at Colgate.

“It really spoke to the significance of the indigenous population in this area: how important they are to our community, how foundational they are to this institution and how they need to be respected,” she explains. “I think the dropping of the name K*nosioni is just a part of that and I was really grateful that our class was able to help make that change possible.”

One wonders, amidst all the time she has dedicated to changing Colgate, how Kaur maintains self-care. It’s simple: watching Oscar-nominated movies, a ‘virtual safe space,’ and reminding herself it’s okay to do nothing.

“I’m someone who is very driven by other people but I also just sometimes feel the need to take on every project and I feel guilty if I had to ever say ‘No’ to something… [but] leadership doesn’t mean taking on everything for yourself and effecting change by yourself. It means delegating and only taking on projects that you can commit your full self to. You can’t do that by saying ‘Yes’ to everything.”

Kaur’s journey is one of inspiration, tenacity and vigor. She hopes that her work can inspire future generations of students and faculty. She aspires to work in government, more specifically with a company filled with BIPOC individuals who uplift perspectives and pride equity above all. She’s uncertain of what the future may hold for her, but is ready to face the beautiful unpredictability of it.

But first, she hopes to leave behind some wisdom. For faculty, she recommends not constantly seeing students raising concerns as a threat to the institution.

“When students push for proactive change, rather than just reactionary change, it is not an attack on the institution. It’s a desire for the empowerment of future generations of Colgate students and empowering an institution that has given us so much.”

For students who are aspiring activists, she shares that it’s important to never lose sight of the mission at hand, despite the adversity and discouragement one may face in achieving it. The goal is to effect change and better the student experience, something we can all achieve together.

“You don’t have to put your heart and soul into every movement on campus. Find that space that is something that you can really put your body behind and be proud of. If that was just SACC for me, that would have been enough. I didn’t need to take on everything and I haven’t. It’s not my responsibility to be behind every movement, but it is my responsibility to support it all. Sometimes support is enough.”