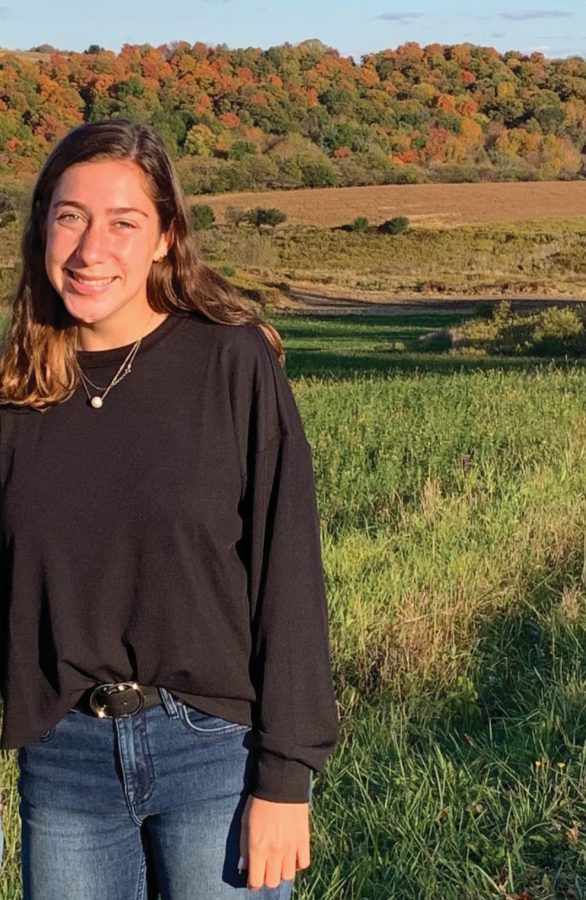 Emily Brew, a senior from Westchester, N.Y., is a political science and Middle Eastern and Islamic studies concentrator. Brew knew she would probably study political science before coming to Colgate, and was convinced after taking professor Michael Hayes’s course on Congress, her most engaging and interesting class of sophomore year.

Brew did not intend on focusing on Middle Eastern studies at all, as she was unaware that the concentration was even an option. After taking former Visiting Professor Amanda Rogers’s Core Middle East class, however, she was hooked.

“It’s been really cool because this minor is so different. I’m able to take art and other types of courses that are different from my political science classes, which is a great way to balance the two,” Brew said.

Brew is extremely involved on campus, finding meaning and bringing passion to each of the activities to which she commits her time. The first club she joined as a first-year was club soccer as a way to continue her love of the sport, but also to meet new people.

“It was fun to have that team atmosphere right off the bat,” Brew said.

Brew also tutors kids at a school about 20 minutes away from Colgate’s campus. Additionally, she joined the President’s Club Student Committee when she was a first-year to express her commitment to and personal emphasis on philanthropy in her own life. This year, as a senior, Brew decided to join the Senior Class Giving Committee to further her passion for helping others.

“I mostly choose to give to financial aid because I know that there are so many people that don’t come to Colgate because they don’t get the package that they need to allow them to come, and I think people come from different walks of life here, but we can incorporate even more people. I think the way to do that is through financial aid, so that’s where I’ve given my gifts to since [my first-year],” Brew said.

After graduation, Brew will be moving to Washington, D.C. and working in government and public sector consulting.

“I’m really excited about this job because it incorporates political science, but also will be different,” Brew said.

Every senior likely has aspects of Colgate that they think highly of while also having certain qualities that they wish they could change.

“I love the Colgate community. It’s made the four years so different than if I had gone to another school. Where we are, and the type of people that come to Colgate, make it such a tight-knit place and it has really helped me grow,” Brew said.

When asked about an aspect of Colgate that she wishes could be changed, Brew mentioned that the way in which we respond to wanting change on this campus is not always productive.

“There are different roads to how we can change campus, and I sometimes feel like we can be a little specific with signing a petition and thinking that we’re changing things,” Brew said.

Brew believes that the Senior Giving Committee can work towards targeting certain aspects of the Colgate community that students have identified as needing extra attention. She gave the example of a Medusa Movement fundraiser in which donations were matched by alumni and then doubled — a first step in creating change in how instances of sexual violence are treated on our campus.

As a graduating senior, Emily Brew has undoubtedly left her mark on this campus, contributing in many ways to student life and the betterment of the Colgate community.