Aaron Grijalva: From The Desert to Hamilton 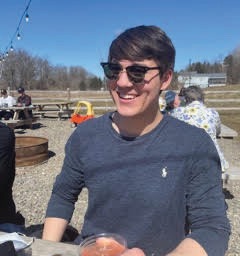 “I grew up in a desert, but it’s interesting because I see a lot of similarities between Hamilton and the Imperial Valley. They’re both places with that small town feel.”

Aaron Grijalva, a senior from Imperial, CA, grew up on a borderland with his four siblings. He made the 2,600-mile journey from the desert to the small arctic town of Hamilton, New York four years ago and hasn’t looked back since. He takes pride in his roots, particularly his family heritage that makes up the identity he brought all the way to Colgate.

“I’ve had a very Chicano, multi-cultural upbringing. Spanish is my first language,” Grijalva said. “My dad grew up on the U.S. side in Calexico, and my mom on the Mexico side in Mexicali.”

On May 9, Grijalva will become the fourth of his siblings to graduate from Colgate. His two older twin brothers, Kevin and Patrick, graduated in 2020, while his older sister, Larissa, graduated in 2017. His twin sister, Vivian, was the only one to not make the journey to Central New York, staying in California for college. His decision to follow his older siblings’ footsteps to Colgate came from a feeling of comfortability in Hamilton.

“My siblings trailblazed the path for me to come here,” Grijalva said. “I was already very familiar with Colgate, and the idea that you can be in such a small place or secluded area but meet people with so many backgrounds and upbringings.”

Now finishing his double concentration in history and educational studies, Grijalva is passionate about spreading the education he feels so fortunate to have gained as a near-graduate.

“Education is something that is really big for my family. I think with the majors that I took here I realized that education is one of my passions in terms of promoting things like political education,” Grijalva said. “Some of the things I’ve been increasingly thinking about are figuring out how to give back to my community; just contributing to things that are already in my community like mutual aid, health care and housing — socioeconomic issues.”

Grijalva attributes his passion for education and giving back to his parents.

“Education was always big in my family. They always pushed it on us because my parents knew that education was the best way to go in terms of social mobility,” Grijalva said.

Education is a big part of the Grijalva family. His dad received his BA from San Diego State University, while his mom received her BA in engineering in Mexico. Now, they both give back to their communities. His dad works for Sure Crisis Helpline Center, a non-profit organization that provides emergency hotlines for issues of domestic and sexual abuse. His mom now works in a prison as a vocational instructor for computer graphics and analysis.

“My parents have been my biggest role models because of the example they set, being hard-working and always pulling through adversity,” Grijalva said. “Both of them having an immigrant background, they still pushed education knowing it would be the best route for our whole family.”

After graduation, Grijalva plans to go to graduate school where he’ll pursue a master’s in social work. His goal is to stay within the public sector, where he’ll continue to educate.

At Colgate, Grijalva is always trying to improve and give back to the community. He is involved with the OUS Scholars program, Brothers, Lasso and is a member of the University Student Conduct Board. As his four years come to an end in May, Grijalva reflected on his journey and growth.

Aside from academics, Grijalva is passionate about reading, video games, Los Angeles sports and Star Wars. Self-described as a huge Star Wars nerd, his favorite movie is Episode V: The Empire Strikes Back.

“Take things day by day; one thing at a time,” Grijalva said he would tell his first-year self. “Try not to think too much about what’s coming or what’s already happened. Just control what you can control and try not to worry about what you can’t control.”