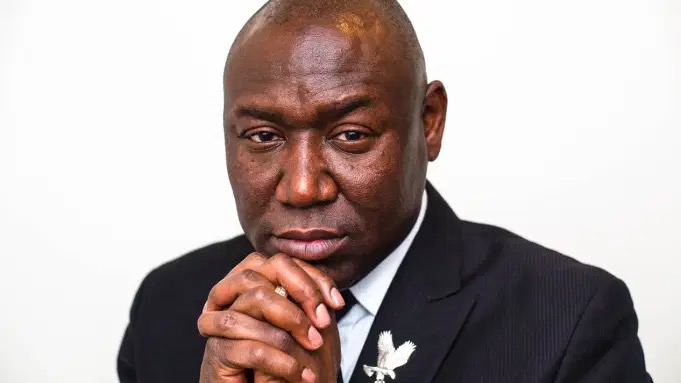 UTAThe Center for Leadership and Student Involvement (CSLI) invited Attorney Benjamin Crump to speak to the Colgate community last Friday, April 16 about his work as the country’s most prominent social justice lawyer, representing the families of victims of police brutality, including Michael Brown, Breonna Taylor, Trayvon Martin and George Floyd. The discussion, introduced by senior Kate Maloney, featured a conversation between Crump and Associate Professor of Sociology and Africana and Latin American Studies Alicia Simmons. Simmons specializes in research concerning the media with regards to race and politics. She started the conversation with a powerful statement addressing our present moment. To kick off the discussion with Crump, Simmons asked, “Please tell us about yourself; who is Ben Crump?”

A poignant and all-encompassing question, Crump responded by telling his life’s story. He dedicates all of his success to his mother and the strong faith that she instilled in him. As a single mother, she sacrificed much for Crump and his older siblings growing up. Crump said his mother would tell him that he “always has to bring something to the table” in his work ethic and dedication. Encouraged by these words, he graduated from Florida State University in 1992 with a degree in criminal justice, later receiving his JD at the same institution in 1995. He counts his ability to help the victims of racism and police brutality as a blessing, dedicating his law practice to making a difference in both the court of public opinion — the media, public narrative and public support — and court of law.

Simmons bridged the discussion by reading “I Too,” a poem by Harlem Renaissance literary pioneer Langston Hughes, which depicts the harrowing emotions of what it means to be a Black American in the eyes of justice and the law. The Hughes poem relates to Crump’s strategy of “shocking the American public” with discourse and narratives pertaining to the horrific treatment of and injustice towards minorities in America. He looks towards his hero, Thurgood Marshall, for strength and inspiration in his work. Marshall was the first person of color to serve on the American Supreme Court and dedicated much of his practice towards social justice in the 20th century. A self-proclaimed Thurgood Marshall disciple, Crump discussed how Marshall took on cases that would have the most significant impact on the public in making a systematic difference in American society.

Crump then turned the discussion towards narratives in public opinion and the media. His book, Open Season: Legalized Genocide of Colored People, examines how poor people of color are, without a doubt, the most marginalized demographic in the nation, often getting denied any real justice in the courtroom. It’s this that drives Crump to utelize his strategy of public appeal to spread word of injustice and gain public sympathy. Social media platforms such as Instagram and Twitter play a significant role in creating powerful narratives surrounding social justice cases. When protests erupted across the world following the murder of George Floyd last summer, social media had an enormous impact in creating outrage as the video of his death spread widely across the internet. Crump looks to social media with a sense of hope since it can encourage change and spread awareness of the experiences of marginalized communities.

To finish the conversation, Crump advised students about studying law and pursuing social justice. Although many stories and issues discussed in the talk were heavy and difficult to digest, Crump concluded with inspired messages of hope for the future and hope for change, citing the progress that history shows towards rights for Black Americans over the last 250 years. He looks to his daughter for hope and faith in his work while also looking back on his ancestors who would have never imagined being able to become a successful lawyer in America.

“Never lose your passion,” Crump told students at the event. “The power’s in the people’s hands; we can control a destiny.”