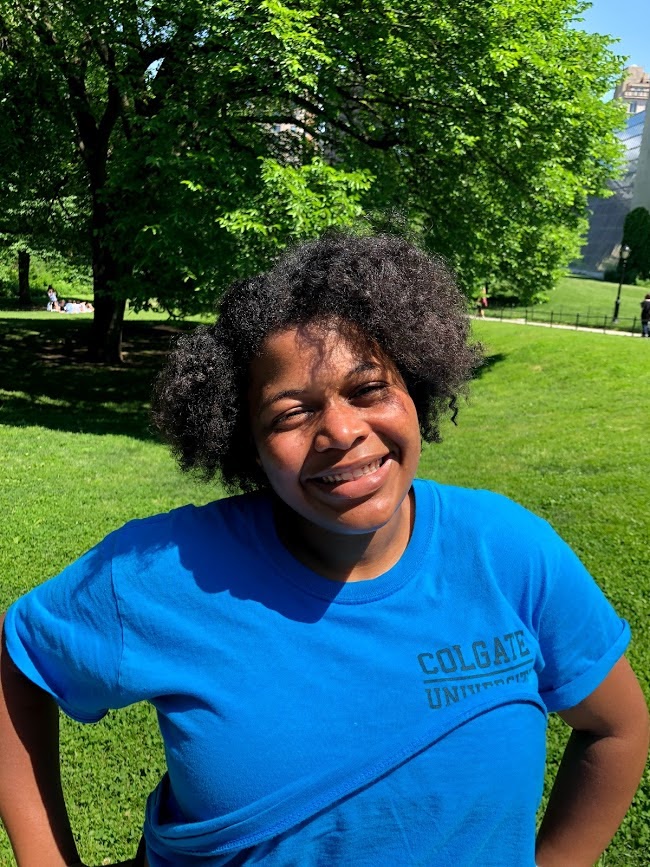 “I am Haley Taylor. I am from the Bronx. I use she/her pronouns and I have 26 days until my graduation.”

As excited as she is, Taylor said she has mixed feelings about graduation as part of her identity has been linked to school for so long. Nevertheless, as an educational studies and psychological science double-concentrator, Taylor has certainly been involved on campus. She’s the co-chairwoman of Sisters of the Round Table (SORT) and a founding member of the Colgate Student Coalition (CSC), where she’s currently an internal affairs liaison. She’s also been involved in Sojourners Gospel Choir, Black Student Union (BSU), Colgate Christian Fellowship, an operations assistant in the Office of Admission, a Link and a social justice peer educator at ALANA. Of the many things Taylor has been involved in, SORT holds a special place for her.

“It was the first club that I ever really joined when I was a first-year student. It’s so weird remembering it now, but I had done a pre-orientation program, and it seemed familiar enough to help me,” she said. “And [now], being a link and in my position as first year representative in SORT, I think I was trying to make sure that other first years… could have the experience that I had, feeling really welcomed and safe in that community.”

With knowledge about the demographics about Colgate as a predominantly white institution, Taylor asked another student what he recommended she join to not feel ostracized or isolated, to which he recommended the BSU and SORT. After going to the first meeting, she never looked back.

“I remember being there every week. My first year, I don’t think I missed a single [meeting]. And I made a lot of friends. Some of my closest friends have been made through that club,” she said. “I think during my first year, it was just a really nice way to have some familiar faces, but still learn about other people’s experiences because we’re not all from the same place. [We’re] not all the same person, but we have a lot in common in a comforting way, in this somewhat unfamiliar place.”

When I asked about things Taylor was passionate about outside of Colgate, she was initially a little stumped.

“No one has asked me that in a very long time … as an education major, I think school has a way of taking over your life, especially when you live and work and study all in the same place,” Taylor said, who has studied from home for the entirety of her senior year. “[Being remote] has been challenging, but it has been nice in getting to know myself and getting to remember what I used to do before Colgate [while] preparing for life after graduation.”

That said, she has gotten into finger knitting, pointed to the fish tank behind her from the Zoom call that she plans on using in the near future. She also talked about scrapbooking her junior year experience and writing, but not for an audience.

“I don’t think that I’ve been as consistent with it as I’d like to do during the school year, but it’s just really fun for me. I love coming up with story ideas or writing poems,” she said. “And it’s very much just for me because once, I opened it up to other people, performing at an open mic, and I was just so focused on what other people were thinking. And that wasn’t what I enjoyed about it — I enjoyed having that to myself.”

Taylor does not have concrete plans post-graduation, but feels content with the uncertainty. She pulled out a long list with every assignment she has due until graduation and, because of that, is giving herself a bit of leeway on the job search.

“I’m looking mostly in the nonprofit sector, because I currently work in [that sector], and I have worked in it before. I just like believing in the mission of wherever you work. I like meeting people, always, but a lot of the people that I have met in the nonprofit sector have really just been helpful and kind,” she said.

Reflecting on her time in Colgate and in Hamilton, Taylor recalled the Village’s annual Christmas tree lighting as one of her fondest memories, especially as a native of New York City.

“It just feels different. It is different — I love learning about events in Hamilton and the Village,” she said. “Colgate sometimes has those tastes of Hamilton. They had [tables from] every shop with goodies out, and the Children’s Choir from the school was performing Christmas carols — it was so cute.”

She laughed while recalling her attempt to ride the horse-drawn carriage, meant for children, at last year’s tree lighting.

“When you’re away from home, your traditions change. And I guess I was part of [the Hamilton community] for those three years, so it was nice to participate in the festivities with [a] friend and make a new tradition for us.”

On the topic of community, when asked about a change Taylor would make to Colgate, she advocated for more empathy.

“From my experience, I feel like I have a lot of friends, not in my department, who say that their professors are not understanding. But, my professors understand me and are patient with me, and see me as a person. So I think that if I could change something about Colgate, I would ask all of my professors and my friend’s professors to understand that, there are some things that are just out of my control, and I maybe cannot do a 50-page reading with a day’s notice because that’s a ridiculous expectation,” she said. “It’s really healthy to have breaks and to sleep, and just sit. I think I would just try to make professors have a better understanding of their students as people and their students’ well-being.”

“I think I have a journal entry because I deleted my social media this year. I had wanted to for a really long time. But I remember posting [about] brainstorming Instagram captions for my graduation … and [journaling] was one of the ways I tried to come up with a caption. I think there’s [a saying to] leave a place better than you found it, or to really make sure that you left an impact or you made it better. But, that’s just not your responsibility or your job to make Colgate better,” she said. “You already have made it better by being here. Make sure that you use whatever resources you feel you need and feel comfortable using to your benefit. And leave yourself better than when you got here.”