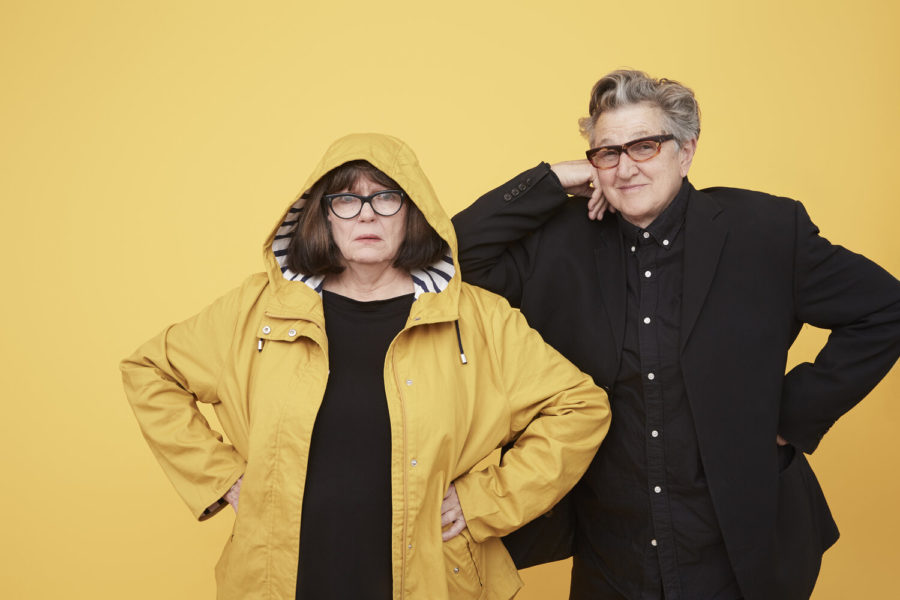 Split Britches’ Last Gasp (WFH) is a quirky, poignant collection of mini skits created by Lois Weaver and Peggy Shaw all about aging, memory and identity through an exploration of themselves and their on-again/off-again relationship. For 40 years, Weaver and Shaw have investigated themes like these by embroidering their unique experiences with their outstanding imagination.

Last Gasp was originally chosen as the name for the show because Peggy Shaw deemed it her last performance, although the title garnered new meaning as the idea for the show transformed during the COVID-19 pandemic — when breath became thematic in itself globally.

Shaw and Weaver are queer women in their seventies, who often play on classic butch-femme dynamics in their performance troupe titled Split Britches. Since their earlier years in the company, they have moved further from characters and just “played” themselves.

“Split Britches will never go out of style. Even now in their seventies, Shaw and Weaver’s performances resonate with the contemporary moment more than ever. Last Gasp is a testament to their remarkable ability to connect generations,” Lecturer in Theater and moderator Benjamin Gillespie said.

While Weaver and Shaw are undoubtedly distinctive characters with unique life experiences, their work is resonant with audiences of any age, gender or sexuality because their performances are so genuine and deeply introspective about the human experience.

“The ‘performative truth’ they create in allowing their experiences to inform their performances, and vice versa, is not something you see a lot of in theater, and being able to experience that was really special. It’s so easy to pretend to be something you’re not nowadays. Be it social media, or the fact that we’re all hiding our faces behind masks, nothing feels truly consistent anymore. Split Britches, in the conversion of their lives into performance, acts as an escape from this trend, and gives us all a ‘gasp’ of fresh air in a world which grows increasingly facetious,” senior Nate Parkman said.

Another element that makes Last Gasp so refreshingly different from other theater is that it was filmed over Zoom. Shaw and Weaver reflected that it was an enjoyable challenge learning how to make their first movie — or “Zoomie,” as Shaw coined it — because they had to discover how to do lighting, sound and camerawork on their own in an empty house.

Just as virtual productions have made theater more accessible to audiences that are typically barred by financial or geographical factors, Zoom performances have also proven more accessible to the actors. After Shaw’s stroke, her ability to memorize lines worsened considerably and performing nightly became a strain, but with their Zoomie, Weaver was able to feed lines to Shaw through an undisguised headset.

“As far as what we can learn from them, their courage to be themselves while performing (such as Peggy not hiding her disability of being unable to remember lines) was empowering and important. Theater is not known for being inclusive towards those with disabilities, but this production enabled it to be,” senior Jacqueline Weitz said.

While Shaw and Weaver happily explored this new recorded mode, they were equally eager to maintain elements of traditional live theatre that make Split Britches who and what they are. Glitches are unapologetically woven into the performance as well as multiple takes of their rendition of the iconic fight scene in Noah Baumbach’s Marriage Story (2019).

“To know that people who have been doing this sort of thing far longer than me can still mess up, and have fun doing it, I found reassuring. That’s probably the aspect of the production that spoke the most to me, those glimpses into the process and what it took for them to make the work they did in quarantine. Having the life experience they have, and being able to put that into their work, I think is also informative. Being able to see not only experienced performers, but experienced people, especially as queer women, I think gives a perspective and a wisdom that can be very helpful,” sophomore Joey Bluhm said.

Throughout their careers, Weaver and Shaw’s performances have allowed them to sing and dance no matter their skill level or age, discover and act out their fantasies and make mistakes unabashedly. This infectious wild spirit imbued in all of their productions shines through the Zoom camera unwaveringly and only confirms that Split Britches can withstand the test of time.