Pete Paasche and His Ultimate Journey 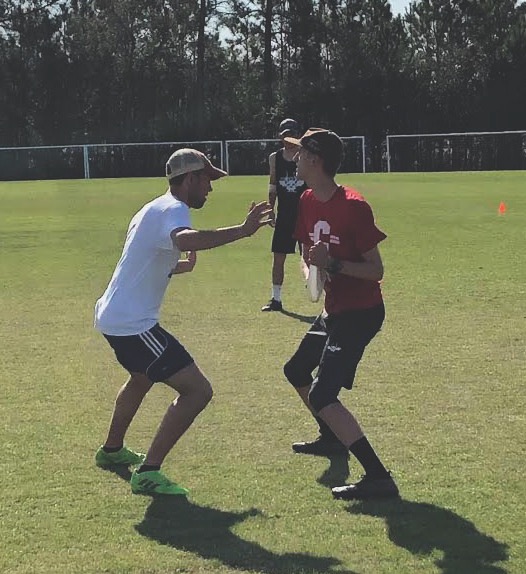 “I’ve been playing the sport for six years before I got here, which is pretty abnormal,” Paasche said. “Most of the team has never played before when they arrive.”

Paasche not only had the unique experience of having Ultimate Frisbee as a junior varsity and varsity sport at his high school, Northfield Mount Hermon, for four years, but also had the experience of starting to play at an even younger age through an Ultimate program at his middle school. By the time he got to Colgate, it was only natural to show up to the first practice the club team held during his freshman fall.

Paasche, now in his fourth year on the team, says that over his time here, his campus involvements have shifted more and more towards Ultimate Frisbee. On the team, he serves as a handler.

“People don’t really know ultimate positions, but it’s usually broken down into handlers and cutters… compared to quarterbacks and receivers. I typically play one of the three throwers [or] handlers.”

Paasche is also serving as a team captain for the second year in a row.

“The way our leadership structure works, we have four captains that’re typically three seniors and one junior,” Paasche said. “Last year, I was the one junior captain. This year, I’m one of the three senior captains.”

Being a team captain of the Ultimate team does not just pertain to the conventional responsibilities associated with being a team captain, though. As a coachless program, Paasche explained that, “The captains also have the responsibility of coaching the team and leading practices, and in addition, organizing practices and… typically we’d be organizing tournaments as well which are usually full weekend tournaments.”

When asked about how his involvement in this program has shaped him and translated to other areas of his life, Paasche noted that, for him, it’s been about the leadership opportunity.

“As a captain, you’re really a captain and a coach. That’s something I’ve really never gotten to do… it’s fun,” he said. “Coming into Colgate, I was…  a little shy. I didn’t think of myself as a leader, although I had captained teams in the past. It’s especially different when you’re responsible for really running everything, both logistically and on the field. And also having to do that with most of the team who are my friends. It’s walking a line of… being in charge, but also being friends with everyone there. And I think it’s been a really valuable way to develop those leadership skills, and also some of those general social skills and friendships have been huge for me.”

When asked about how this club has shaped his Colgate experience, Paasche was quick to respond: “It’s shaped it a ton.”

“Over the years, more and more, it’s definitely become my primary friend group, and it has gravitated more and more towards the team since freshman year… every tournament, like going away for the weekend with the team and staying at hotels together and the drives and everything… such a close bonding experience,” he said.

Paasche hopes that he has impacted the club by instilling the program dream into the younger players: reaching nationals.

“Our dream for the program, or at least my dream for the last four years, was to get us to nationals for the first time. And I think we had a really good shot at it last year and also this year, which is kind of tragic that we didn’t get the chance to try. But I think that dream is still very much alive in the program, and I think it’s gotten stronger since I came in. Which is really what I was hoping for. I’d love for Colgate kids to break into nationals… it’s never happened before… I think we’ve gotten in a stronger and stronger position to do so over my time here.”

With disappointment, Paasche admitted that he believes his impact would have been much greater without COVID-19, as the pandemic has cancelled both their spring 2020 and spring 2021 seasons — both of the seasons he was supposed to lead as captain. “I’m optimistic about the future of the program,”  Paasche noted, despite the hardships the pandemic has produced.

What will he remember about his time as a part of the Ultimate program above all? His sophomore year regionals tournament.

“You have to win the regionals tournament to get to nationals. We lost to Hamilton in the semi-finals … which was obviously very disappointing. But that whole weekend at that tournament and competing and seeing that team working together, I think that definitely was the biggest highlight for me… a couple games before, we beat Wesleyan, who was supposed to be the strongest team in the region. That was a great moment,” he said. “That whole tournament is definitely going to stick with me for a long time.”

With graduation right around the corner, Paasche hopes that he continues to play the sport he loves even as his time at Colgate comes to a close. With Ultimate club teams in almost every city in America, Paasche is hopeful about his ability to continue playing club Ultimate.

“Hopefully Colgate’s not the last stop of Ultimate for me,” he said.