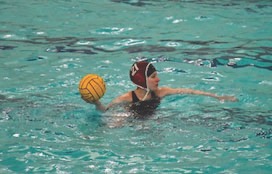 One of the many great things about Colgate is the diverse array of teams and clubs that exist on campus. At the annual fall club fair, excited students staff dozens of tables and work to encourage students to join their organization. From cheese tasting to dance groups, from improv to sports teams, there are clubs for all students. In the extensive sea of groups on campus, one exciting, niche group is the women’s water polo club. This athletic and spirited group is headed by co-captains Cassandra Bradley and Mackenzie “Kenzie” Martin.

Martin, a senior from Lexington, Mass. double concentrating in molecular biology and economics, has a lengthy history as a competitive swimmer. She started swimming at the age of 5 and was a part of the varsity swim team for her first three years on campus. She was encouraged to join the women’s water polo team by her now co-captain because of her history with swimming.

“It was definitely a transition getting used to the aspect of it being a contact, team sport because swimming is pretty individual-oriented and definitely not a contact sport,” Martin said.

Although the sports are very different, Martin has found herself enjoying the competition and team dynamic.

“I cherish the memories I have of being able to be a team player and work with my teammates to actively accomplish a goal — a satisfaction I never really got competitively swimming,” she admitted. Martin says she has grown to love water polo more than swimming through her time with the water polo team.

The goal of the women’s water polo club is to provide an intense athletic environment as well as social opportunities. The club aims to create lasting friendships that are formed by their frequent and rigorous training. In a normal year, the team holds one to two hour practices three to four times each week. The team works with C.J. Molina, the Assistant Director of Recreation Programming, but plans and conducts their own practices.

The club is a part of the New York Division of the Collegiate Water Polo Association. As a part of this division, the team works hard to come out at the top of their league at the end of each season. They also participate in three tournaments each year, one of which is held at Colgate. The rest of the tournaments are held at various schools in New York. Martin has travelled to Cornell, Columbia, New York University and Hartwick to compete with the water polo team.

This year has come with its challenges due to the COVID-19 pandemic. The tournament season, unfortunately, had to be cancelled due to the pandemic, and practices underwent major alterations. The team is limited to meeting one time each week and the players are not allowed to practice contact plays. Instead, the members practice swimming, shooting and passing.

“It has definitely been a challenge restructuring practice, but [Bradley] and I have definitely made the best of it,” Martin said.

COVID-19 has also made its impact on the water polo social scene. In the past, the members would get together outside of practice and hang out at each other’s apartments and eat post-practice dinners together at Donovans or downtown. Now, the members are much more limited in what they are able to do together outside of practice, but maintain they are happy to have their practices together.

The current water polo team consists of 11 students, but they are always open to new members and anyone is welcome to join the team.

“Water polo is a great sport to stay active while also having a lot of fun and bonding with your fellow teammates,” Martin said